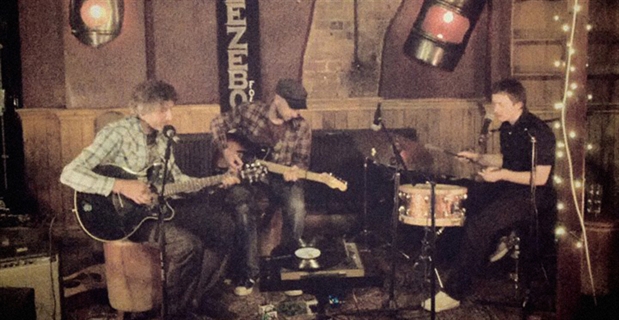 interview by Enrico Viarengo
Tweet
You published your first record, "Closer to the Snow", in very few copies, then it came "Whispering Trees", but it's really hard to find any information/streaming about it and even pictures of you. However, I'm not the only one to think that "Whispering Trees" is one of the best 2013 album and actually it deserves more listeners. What do you think about marketing, web promotion, spotify and stuff like that?
Matt-We haven't actually played that many gigs, the albums been a nice slow burner with the good reviews and reaction still coming late into the year. Band photos are not something we generally do as its a bit staged,i had to do some for the album but my eldest son Oliver took those in my garden as it felt more comfortable! I find all the promotion/marketing side a bit grating,i think you find your audience naturally after a while.It might be a cliche but we reslly are 'in it for the music'.Ive had major label experience in the past and it was probably my least
creative time,Arlens a cool indie label with people who care about the music and thats the most important thing for me.
Mark - I use spotify a lot. It's a good way to check out albums and artists I think. It's great as a consumer but it's definitely contributed to the downturn in earnings for recording musicians. There's no real need to take a chance on buying albums you don't know any more. It's a real double edged sword.
Stafford: I think we've all been around long enough to have had our fair share of annoyances around marketing, promotion etc. Plantman is pretty unashamedly all about the music, and we're not really interested in trying to make ourselves look cool in magazines, the internet
etc. We're too old for a start.

This summer we had These New Puritans in concert for the most important festival in Turin. they're from Southend-On-Sea like you, I find them boring and pretencious, what do you think of them? is there a scene in your town?
Matt - Honestly dont know them! We're a bit older in our late 30s so its quite nice to be out of any scene,pretensious bands that dress up are the worst though,i just think of Placebo or Suede! There are some good young bands in Southend,keep an ear out for Banana Club Sandwiches, looks like they will be working with Sonic Boom soon,they've got something special going on.
Mark - I've heard one song by them but it's not the kind of music I go for. I'd never heard of them until I saw a review on Pitchfork, despite coming from the same area.
There isn't really a scene in Southend that I'm aware of . I think one or two people have tried to start a couple but most people around here are  too laid back to get involved. There's a few musicians and bands that go out occasionally and watch each other. But as Matt says, we're older, we're out of that loop, if it even exists.
Stafford: I've never heard of them or any of their stuff but I'd put money down on you being absolutely right Enrico.
I'm listening to your first band right now, Beatglider: lo-fi attitude and a voice very similar to Stephen Malkmus of Pavement. Am I a fool? Do you like American bands?
Matt - Beatglider were really into Pavement/Sebadoh and their laid back approach to recording and performing.I probably only listened to American bands during that time and Lee( other Beatglider singer/gtr) was/is a massive Sonic Youth fan. With Plantman ive tried to get away from the Pavement-isms definitely,it sneaks back now and then. Pavement led me to so many great bands though,especially the Flying Nun stuff.
Back to UK: Beatles or Stones?
Matt-Both! "Beggars Banquet" - Stones, "A Hard days night" - Beatles.
Mark - Velvet Underground.
Stafford: Black Sabbath.
In Italy people says that english food is mostly shit. I disagree, what's your favourite meal?
Stafford: To be fair, most of it is indeed complete rubbish - but we have the great English Fried Breakfast which is envied throughout the world.
Mark - It's almost shit, but not quite. I like any well cooked meal as long as its followed by a dish of Tiramisu. I love Tiramisu.
I know you're a gardener (Matt), that's why you chose the name Plantman, right? And "Lunaria", one of the best WT songs, too? What's the other members' job?
Matt - "Lunaria" is the Latin name for the honesty plant,if I get stuck for titles plant names are the best!
Mark - I work as a professional dog masseur. I have a band called "The Strokers".
Stafford - I work in the arts, which is every bit as annoying and pretentious as it sounds.
How many of you studied - academically speaking - the instrument?
Matt - I'm self taught which is good but frustrating when i don't the names of chords and notes,if it sounds good i'll play it!
Bryan - I studied music at college for a while, but it wasn't really for me. I've recently been trying to persuade a close friend of mine to teach themselves guitar rather than taking formal lessons. In terms of creativity, I think it's easy to find yourself set within boundaries if you find yourself with the wrong teacher. I took guitar lessons at school and later spent time trying to release myself from these boundaries. In contrast, I taught myself to play the drums, and as a result, I like to think that I've always naturally played with a similar feel to the people that I'm influenced by. Classical music and jazz are a different matter, but for what we do, the emphasis is always on being creative rather than technically proficient. For me, a drummer like Charlie Watts is the perfect example of someone who plays with a natural, self-taught, characteristic groove.
Mark - I was born playing guitar. The doctors were amazed. And confused.
Stafford: Like Matt I don't know the names of notes - it's amazing the feel you can get for playing without having any musical knowledge, if you keep trying.
I saw you posted a songs ohia song on your fb page when Jason Molina died. As musicians, what's your reaction to sad events like this one?
Matt-Obviously its tragic, lost so many fantastic musicians in the last few years,Mark Linkous, Chris Reimer, Grant McLennan, makes the legacy of their recordings even more special.
Your "guilty pleasure": a record you own and love that is considered rubbish.
Matt - Any of New Orders albums after "Republic", they still do it for me even if everyone else says they've lost it....and the Frog chorus. Paul McCartney,but that could never be called rubbish?
Mark - I quite like "Mirror Ball" by Neil Young. I always feel a bit guilty listening to it because of Pearl Jam's involvement. Pearl Jam are dreadful.
Stafford: Anything by Kate Bush. or Iron Maiden.
Matt-What!! Kate Bush is absolutely incredible,never a guilty pleasure!!!

Closer To The Snow