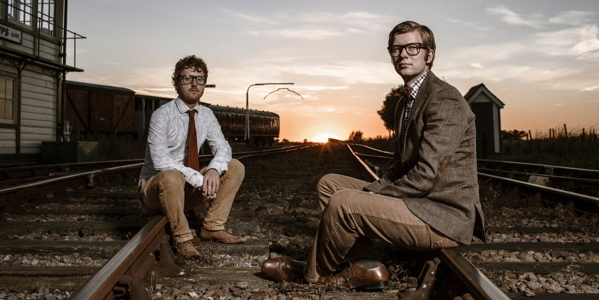 Hey Mr. Willgoose, Esq and Mr. Wrigglesworth how you going? Where are you now? Hope in a comfortable place..
We’re in our (hire) van in Georgia, driving from Atlanta towards Savannah for a show there tonight. Reasonably comfortable, thanks, but it’s not as nice as the van we had on the west coast! And we’re feeling fine thanks, although Wrigglesworth is complaining as he thinks he has a case of the sniffles.

So, we can start talking about yourself and not about your music.. Who are you? What about your "EDUCATION"?
Who are we? I’d have thought that’d be self-evident - we’re J. Willgoose, Esq. (guitars, banjo, electronics) and Wrigglesworth (drums and electronics). We’re a relatively reclusive, mysterious duo. It’s just how we like to be. Wriggles’ education is negligible - he barely knows anything - whereas I hold several diplomas, degrees and PhDs. All of the above is true.

We talked about education because i think was important to understand if we want understanding you. You look like a sort of "MUSIC PROFESSORS", with Mr Willgoose playing an infinite sequences of instrument and Mr. Wrigglesworth with drums. How all does it start? What's about BBC and its programs and the "INFORMATION" concept? Let me guess,  you don't watch TV, isn't it?
Ha - no, I do, I do! A lot of people seem to think I’m just stuck in the past but I’m really not, I watch a lot of modern stuff. There are some great dramas at the moment and I am also a really big fan of the BBC4 series Storyville. As for being professors - well we are trying to look a bit like Open University staff I suppose in a way, but I don’t know about being professors of music! Maybe professors of looking ridiculous.

In terms of writing a song there’s no set process. Normally there’s some kind of idea - either a general subject matter I’d like to write about, so I’d set off doing some research, or some small musical idea that I feel can be fleshed out into something else. Whether the footage comes first or second is quite random really. The idea behind it is normally what precedes it all. Then I do a demo version and play it to Wriggles, who sorts out my terrible drums for me, then I work on it quite a lot at home until I’m happy with it.

As for the BBC - obviously we’re big fans, but actually our British footage comes from the BFI (British Film Institute) for the very largest part. They’re a great company and really supportive and helpful to us.

Making music with strong visual impact was used by Pink Floyd and Talking Heads, for example. Recently I am reading "How Music Works" by David Byrne and he talked about a 360° concept of art, including music, vision, theatre, poetry. What Do you think about that? Do you believe that it concerns with your idea of music and shows? How Would you describe your concept of ENTERTAIN?
I think it ties in quite well, although only by accident. I didn’t really set out to do any of what we’re doing now, I just started using public information film samples because I thought it’d be quite fun. And it is, and has been, but the live show has evolved gradually over a period of several years to get where it is today. I suppose there are elements of theatre and certain elements of poetry to the samples and setup that we use, along with the heavy audio and visual elements. It can be a but much for people when they first come to a live show, like a sensory overload or something!

It seems that when we listened to your first album "Inform - Educate - Entertain" there's no only BBC frames, but it seems like listening a time flow. Why describing history with music? How much important is culture for you? are you thinking about a series of LP's in which you propose a touch of history? For example "Inform - Educate - Entertain" was about thirties BBC programs, There will be something about second world war or i don't' know about Man on the moon, the internet explosion?
Using the historical context to drive an EP or album in terms of giving it narrative is quite important to me. It worked well with The War Room EP and then with the album we went a bit broader and scattered in terms of subjects and styles. I think the next release, which we are working on when we’re not touring, will be closer to The War Room in its treatment of the historical material and use of it to drive the story. I think if we were a purely instrumental band we would struggle a lot more to connect with crowds and audiences, so using the material that we do to inject a bit of a story, a bit of humour or a bit of tragedy is a very important tool for us.

In your music I listened first of all the influence on Mike Oldfield and I know that was reductive refers only to Mike Oldfield: What kind of music did you listen yesterday? and last week? and last year?
Well we’re currently in the van listening to LCD Soundsystem, who are a big one for me in many ways, especially their live shows, and they’re a band I always forget to mention. Otherwise I was listening to an African artist called Amadou Balake this morning, and besides that all sorts of stuff. Luke Abbott, Little Dragon, Metronomy, London Is The Place For Me, Jahtari Dubbers, David Bowie, Byron Lee & The Dragonaires, Doc Watson.. all of these and more in the last week! We like a lot of different music. The more good and varied music you put in your ears, the more good and varied the music that comes out when you try yourself, I think.

I've red that you sold 15000 copies in the first UK week, amazing for these times. How do you see music in the future and logically What do you think about physical vs digital within "Cloudify" world?
That’s not quite right, sadly - we sold about 5,000 in the UK in the first week, which was still amazing though! We sell a lot of physical music still, probably more than most. Part of that is that we have a slightly older audience at home who are used to owning a physical product; another part is, I hope, that we put a lot of thought and effort into the design and packaging, which makes people want to own it, hold it and look at it rather than just have it as a digital version. I don’t really mind how people listen to music, the important thing for me is that people continue to support it. Music will never go away as long as humans walk this earth, though, so it’s just a question of finding a model that works for listeners and bands - and, to be fair, to the companies funding the bands’ releases in the first place.

I've listened to your ep tribute to Elfstedentocht, in November. Where did it come from that idea? Do you reply some tracks in your setlist?
We do play one or both of the songs live on occasion, yes - they’re good fun and it’s nice to have some newer material in the set. As to where it came from, we were approached by the organisers of a festival called Explore the North in Leeuwarden, the Netherlands. It’s the ‘finish line’ for the Elfstedentocht race and the whole thing is a very big deal in the Netherlands in general. They had some footage they wanted us to use and then come to play at their festival. It seemed like a mildly crazy idea so we said yes, of course!

After USA you're touching Italy with your tour. That's a great bite of our Country, What do you think about Italy? Do you know something about italian music? about contemporary italian music?
I have to confess I don’t know a lot of contemporary Italian music. We’re good friends with Lush Rimbaud, based in Ancona, and I think they’re great. I also used to like a band called Yuppie Flu, a long time ago.. but obviously Italy’s musical heritage is second to none in the world, especially in opera and classical works. My favourite piece of music ever is Mascagni’s Cavalleria Rusticana - it’s just the most beautiful, moving, sad but uplifting piece of music I’ve ever heard. I want it played at my funeral! And in general we’re really looking forward to coming over to Italy. We love the food and the people and have been pleasantly surprised by the reception we’ve had there to date. We’re hoping to see some good crowds and to have some fun - and some pizza!

The Race For Space