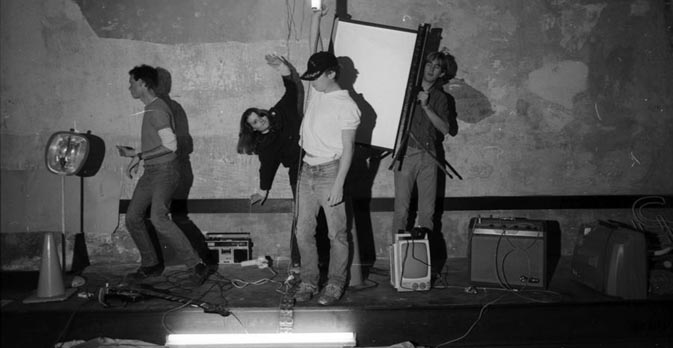 After so many interviews, is there still something important that you didn't say?
I am very thankful to be remembered by so many great people and to have gotten to work with and continue to work with so many wonderful people. I love my family and my friends and my bandmates who are both.

How did you live the double life student - musician?
I have been leading a double life for many years, but who doesn’t? (Laughing) I had just graduated from the University of Georgia with an art degree in 1978, when I was invited to audition for Pylon in February 1979 by two former classmates, had remained in Athens Georgia waiting for my first spouse to graduate college and was working two jobs. The premise of the band was that it was an art project and it had a goal of going to New York City and then to disband after performing there and being written about in New York Rocker. I thought that it sounded like something fun to do and that wouldn’t take too much of my life up. (Laughing) The B-52’s saw us perform in Athens, Georgia and helped us get our first booking in New York. We performed at Hurrah in New York opening for the Gang of Four and got written about by Glen O’Brien in Interview Magazine. Pylon then made a decision to keep performing as long as it was fun. We began to tour and pretty soon, I was a full time musician - and was until December 1,1983 when Pylon broke up for the first time. In early 1987, I became a mom to a baby girl with my second husband Bob Hay of the band Squalls. In 1988, Pylon reunited and I led the double life of mom and musician. We broke up again in 1992 and I went to school to become a registered nurse and had another daughter. I then led the double life of being a mom and nurse. Around 2004, Pylon reunited and I was leading a triple life, mom, nurse and musician! Pylon formally ended on February 25,2009 with the death of our guitarist Randy Bewley. I also had had a recording project called Supercluster from 2007 until around early 2013. Randy had been involved with this until his death. Some members currently play with me in Pylon Reenactment Society.

In 2007, DFA Records reprinted - with some bonus - your first two albums: how did this collaboration born?
When Pylon reformed in 2004, one of our goals was to reissue our material. It was not readily available and we were happy with the sound quality of a CD which had come out called “Hits.” We had started working on gathering the recorded material together to remaster, when out of the blue we were contacted by the DFA. It turned out that James Murphy had been playing some songs by Pylon for years in his DJ set and they were interested in having Pylon be their labels first reissue record. We liked the other product on their label and our bassist Michael Lachowski flew up to New York to talk to them. In 2007, Gyrate Pus came out and got a good response from our fans and critics. In 2008, we did a little touring. Randy Bewley finished putting the tapes together for Chomp More and they had been remastered. Before the rest of the package could be put together, he passed away in February 2009. The project was put on hold for a few months and came out in October 2009. Currently, Pylon are taking baby steps toward a reissue of our material, because the DFA albums are now out of print. We are talking to several labels and hope to put them out again on vinyl next year. In 2016, Chunklet issued a live recording called “Pylon Live” that includes the complete performance of our first last show (Laughing) from December 1, 1983 on a double vinyl LP. My band Pylon Reenactment Society performed along with Love Tractor for the release shows in Athens and Atlanta, GA.

Many people have discovered Pylon from the R.E.M.'s version of Crazy: which tracks by R.E.M. would you choose for a cover and why?
That is such a hard question, because I love so many of their songs! I don’t know if I could do it justice, but the song “Everybody Hurts” resonates with me. We all do hurt sometimes and we do need to hold on.

The history of Pylon was connected to many important realities of the alternative scene of the early '80s: you could be born and explode only in that period?
It was a very exciting time to live in our town and the rest of the world. Music and art decentralized from just a few locations like London, Paris, Rome, New York and Los Angeles to smaller towns like Athens, GA. It was a culture of do it yourself or DIY. Woman, people of color, different music cultures like African, as well as different sexual orientations mixed together in something new. It was infectious and fun. I would make a case for the dividing point in time to be 1976 or 77 with bands and artists leading the way like Patti Smith, Ramones, Blondie, Talking Heads, B-52s, Sex Pistols, The Clash, PIL, Gang of Four and this blossoming was full on until maybe 1985 or so. It certainly was an influential period of time that later artists like Madonna, Prince, Cyndi Lauper built on.

Part of the history of Pylon is part of the history of Athens and in particular of a legendary club: the 40 Watt Club...
Yes, our drummer Curtis Crowe had called his loft in downtown Athens, Georgia the 40 Watt Club because his friend Bill Tabor had made a joke that it was lit by a single bulb hanging on a wire from the ceiling. After Pylon had done some touring and found DIY spaces scattered across the United States, Curtis realized that he could start a club on a shoestring budget - and did with his friend Paul Scales. It has passed through several locations and been under several different owners.It is currently downtown and one of the better mid size clubs around. It’s nothing fancy, it’s homey. The money is put in the right places, into a nice stage and good sound system and monitors. The bar is nice too.

What are you listening to now? Is there something you're passionate about?
I’m listening to the new Glands Box set just came out on the New West label. The Glands were not widely known outside of our town, and their singer - songwriter Ross Shapiro passed away a few years ago from cancer. His bandmates went through 100’s of hours of tapes that were for an unreleased third album and put that together.

It was also a season of great female and charismatic leaders and singers: do you think it's casual? What was your role and peculiarity compared to other "colleagues"?
I came to it from a slightly different place in that I was not placed in front like a centerpiece, I was an equal and integral part of the band. Our sound was based on that. Every instrument was equal. The vocals were not in front like other mixes, but were not buried either.

In a few words, how would you define Chomp, Gyrate and Chain?
"Gyrate" was recorded and mixed in less than a week. It has a spare, angular sound. It was recorded in a live situation with the vocals redone because of “bleed” from the other instruments.
"Chomp" was recorded on and off over a year. We took more time to write the songs, and changed producers after just a few tracks had been recorded. We had started going in a more experimental direction. The sound is fuller and not as clean.
"Chain" was recorded in a week at Reflections Studio with a producer and engineer who had worked with bands like the Pixies. The production is good, but the songs are a bit similar in writing style and execution. We felt the next record was going to be really good, but broke up before that happened.

Is there a song of Pylon you're most proud of?
Well, I am proud of all of them. Like children, how can you choose just one? But, if I had to pick just one, it would probably be “Crazy.” I have had so many people come up to me over the years and tell me how much that particular song means to them.

Pylon Reenactment Society: tell us about this project!
We started out by playing what was to be a one-off show during a series of events called Art Rox Athens which explored the connection between the art and music scene in Athens,Georgia between the years 1975-85. I was invited to perform by one of my former Supercluster bandmates, guitarist and producer Jason NeSmith, who was organizing the shows.Jason was extremely surprised when I said that I wanted to perform some Pylon songs. I did not want either guitarist Randy Bewley or the music of Pylon to be forgotten at this event. After all, Pylon had all been art majors at UGA during those years. Local Indie band Casper & the Cookies provided the backing band which included Jason as well as another former Supercluster member, powerhouse bassist Kay Stanton and drummer Gregory Sanders. I decided to call this project Pylon Reenactment Society - because it wasn’t Pylon, and as a nod to what Pylon had sometimes jokingly called themselves at practice.
The Art Rock Athens audience was blown away, and PRS was invited back to play a longer set the next year opening for the Fred Schneider (of the B-52s) solo project Supa-Fine. PRS added a new drummer for this show after C&tC’s Gregory Sanders had to have shoulder surgery. Veteran drummer Joe Rowe (The Glands) was brought in and kinetic keyboardist Damon Denton was also added to bring in fresh textures and sounds.The feedback from the audience was again very positive. Denver, Colorado band Dressy Bessy heard about us through the grapevine and invited us to play a few dates with them. What had started as a one-off project, has now made a lot of Pylons old fans happy, while making some new ones along the way. Over the last few years, we have performed at small festivals and small to mid-sized venues in the US on both coasts, the southeast and midwest. Pylon Reenactment Society have shared the stage with the likes of Love Tractor, Swimming Pool Qs, Richard Barone, Positive No, 75 Dollar Bill, Mitch Easter’s Project Balderdash, Ltd, Dressy Bessy, The Tissues, Cindy Wilson solo, Hurry Up and many other fine indie bands. We have a tour to the west coast planned for early December this year and will perform with some more cool new bands as well as rock hero Alice Bag.
We just released a new 7 inch vinyl single on November 30th “Messenger” backed with “Cliff Notes” along with a video for “Messenger”directed by Tony Brazier who is in in town working on a documentary “Athens, GA...30 Years On” that is a follow up to “Athens, GA/Inside-Out.