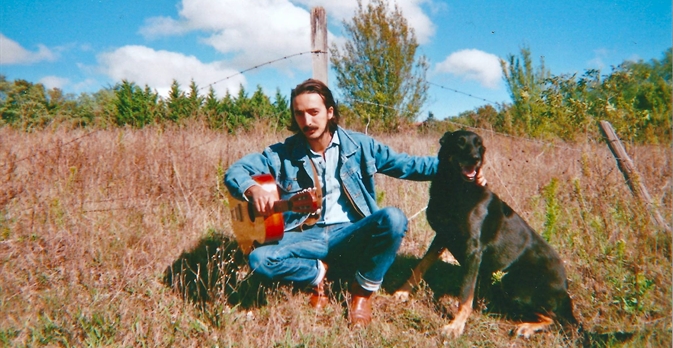 Hey Raoul, thanks for your time and also for your great debut album. It doesn’t happen so often that an album can cut so deeply. It was a real revelation for me. Actually when I listened to “The Silver Veil” for the first time I was reading a book about a man who tries to commits suicide but then, failing, finds himself in a deserted world, and the music kind of resonated with the book (“Dissipatio HQ” by G. Morselli; he himself did commit suicide after writing that book). What is the setting of “The Silver Veil” in your mind?
First of all, thank you for these words, and also for the book tip ! The setting of the album is not as tragic as that of the novel you mentioned, but the idea of a deserted world rings a bell.  The songs featured on « The Silver Veil » are a collection of fragments of my world and life, at the moment I wrote the songs (2014-2015).  I only chose not to mention anything directly, in the lyrics. They make sense to me that way, and hopefully it does to others.I think it would be fair to say that it is music for loner times. That always was the mood when I composed.

Passion and work irradiate from the album and they are surely part of the result. There is also a strong guitar/instrumental signature that seems to have been honed through the years. “The Silver Veil” might well be an instrumental, fingerpicking album and still be great. How would you tell the story of your transition from the beginnings of your career (or before) to the recording and the releasing of the album?
I picked up the guitar at 14, and it really grew on me quite fast fast. Over the years, the more I listened to music, and discovered bands, genres, styles of playing, the more I got into it. From my teenage years until now, I have been playing in different projects, covering a wide range of music genres.
After years of playing electric guitar, I took folk guitar lessons. I discovered fingerpicking at age 20, and from this came the idea to have a solo project. I first composed blues-inspired song, playing under a pseudonym I gave up a few years later, when my music began shifting to this more folk and intimate sphere.
During my years as an expat in Berlin, I met Martin J. Fiedler, from the Klangbild Studios, who convinced me to put out a record. He was enthusiastic about the songs he’d heard live, so he invited me to his studio, located around Ostkreuz.  I left Berlin early 2016 with this first album in hands, and went back to France and started promoting « The Silver Veil ». It took a year of work until it finally reached the ears of people who showed interested in releasing the album and working with me.  There was never a major event that would make me change direction in music making. It all happened very naturally.

How has Berlin contributed to the making of “The Silver Veil” and of you as an artist in general?
I headed for Berlin in 2013 because I needed to renew myself. Going to a new place seemed like the thing to do. Once I arrived there, I kept on doing the thing I was doing before : music.
I played many shows there, and got myself confronted to the hardship on playing very soft and quiet music for audiences whose interest would quickly shift from the stage to the bar. And that is all fine, it hardened both my experience and nails. I collaborated a lot with other musicians, I busked the bars, all of that being equally important for personal development.In the end, "The Silver Veil" is not an album about Berlin, but about what I lived in this town, who I met, what happened…
At this day, I still miss the city a lot, but leaving was the best thing to do. Berlin is a tough town for upcoming artists. If you can't stay focused there, you can’t really make it. I actually have this kind of love/hate thing with Berlin.

Much of your lyrics and of the themes of the songs lead me back to my high school memories of medieval poetry (something that touched on early Dante and Petrarch, probably they will have a French counterpart too), in which love is a mean of spiritual elevation, an aspiration that maybe leads the restless character of your music. Dante himself used a “screen” (veil) simbology in his “Vita nuova”, in which he introduces Beatrice, his greatest love but also his means to reach God. What are your references on the “literary” side of your music?
I’m not sure I could give any names here, as to what writer cold be of an influence on me. I enjoy reading a lot, and all I can say is that reading makes me want to write, the way listening to music makes me want to compose.  At the moment, I’m into a phase of reading novels set in the Middle Ages, a fascinating time in History !

Also, probably your listeners can pick out more or less accurately your modern Anglo-Saxon musical references, but maybe not the ones belonging to the earlier European folk tradition. Can you tell us about them, if you have any?
It is no surprise, modern Anglo-Saxon references are more obvious. I listen quite frequently to traditional music, European one, but not only. Its influence on my music might be more unconscious though.

This leads me to the fact that you have a surprising (or not so surprising) affinity with other Talitres artists, I’m thinking about your fellow French national Stranded Horse, but also Will Stratton, and probably others I don’t know or recall at the moment. Can you tell us about your relationship with the label and maybe with their artists?
Before getting signed, I only knew the two artists you mentioned. I am not a regular listener of today’s music (not by choice, it just happens so). I’m discovering their roaster, slowly.I feel very happy about the situation, I did not expect to have my first album released on a label of this importance and quality. Everything that happens thanks to their work makes me feel very positive about my project, which is kind of new to me.

Despite the sparseness of the arrangements of “The Silver Veil”, that contributes to its great spiritual tension, I enjoyed also the non-guitar contributions to the record, the percussions mostly. They make an incredibly natural “background”, not in a negative way of course, as if you were actually putting up a dialogue with the very earth. How did the parts that you don’t play directly evolve?
The recording of the arrangements were kind of a ‘last minute’ thing. Most of the vocals and guitar parts had already been laid down when I started working on arrangements, along with my friend Pierre-Hugues Hadacek (drums). There was a last day booked at the studio, so we decided to focuse on the arrangements (drum parts, some piano here and there, shaker, flute…). I invited my father to come to Berlin so he could play transverse flute on my album. I grew up listening to him playing music. Having him playing on a few songs was my way of thanking him for his support and involvement over the years.
I’m very proud my best friend and dad could join me on the album. I have good memories of the studio session with them. I remember that the very last thing we did was to record drums on the instrumental track "The Silver Veil". I asked Pierre-Hugues to improvise.

We don’t get to interview young French artists that often, so I wanted to ask you how things are, in more general terms, for a young artist/musician in France at the moment…
The shortest answer could be : tricky. In any country, being a musician and trying to make a living off music might not be the best career choice. But when you’re driven by passion, you soon forget about being rational. The hardest thing is to overcome doubt.
In the end, it all depends who you’re asking this question to. As for me, I feel good about it, at the moment. It’s not always been the case.

It looks like your debut album has attracted a reasonable amount of attention here in Italy, so is there any chance we might be able to see you play live in the near future? Thanks again for your time.
We will start working on it soon. I’m very happy of the feedback I get from Italian magazines, blogs and listeners. I received some very positive messages of people asking me if I’ll be passing through their town soon. We’ll be there, and I’m looking forward to! Thank you.