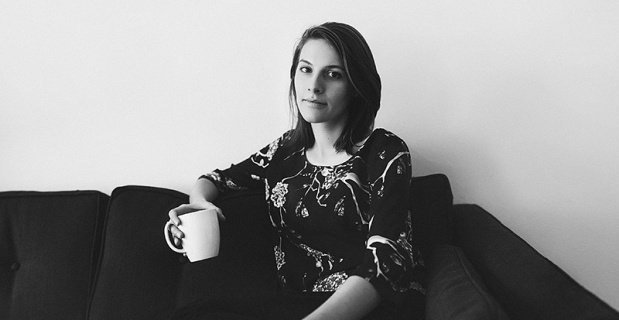 Songs over the water surface

interview by Lorenzo Righetto e Vassilios Karagiannis
Tweet
Just to break the ice: let’s assume you meet an old friend of yours, you tell him you’re a musician, then he asks you to play a song. Which one would you choose?
Well, I've played music for many years, basically since I was a kid and started writing songs when I was 18, so if they were an old friend they'd probably remember my songs as light folky guitar pieces. To show them what things sound like now, I'd probably play them either “If It Does”, or “Water Dreams”.

You just published “Water Dreams”, your second album. We found the overall concept and its rendition incredibly touching and beautiful. I could actually “feel” through your music how memories are lived, as if suspended in water. Can you talk to us a bit about the conception of this record – which personal events, maybe, or which period of your life inspired you?
I wrote this record my first year living in Portland. It was the first time I'd ever written songs as a part of one cohesive piece, rather than a collection of separate ideas. They all fall under the idea of being humbled by change, in this case the catalyst of that change was leaving New York. Coincidentally during this time I'd been having “Water Dreams” nearly every night, and all these songs were coming together with water metaphors. When it came time to flush out the instrumentation, I worked on the arrangements with cellist Dan Bindschedler (and later on drummer Ji Tanzer and producer Rian Lewis) to have the sense of different bodies of water. I wanted the whole album to feel like one sit-down, with each songs carrying fluidly into the next.

I think that your voice has grown with every record, and in “Water Dreams” you show an undeniable, understated power that leaks through every note, much like Joni Mitchell, who is your personal hero in music, or so I gather. In “Water Dreams”, in particular, your interpretations sound less direct and, on the other side, more evocative, fusing with the surrounding soundscapes. Is it there that your artistic paths diverge?
That song specifically came about in a very different way for me. I typically write a song pretty cohesively from the start, then maybe tinker with some details for the next several months, but “Water Dreams” was almost like a meditation I'd sit down and play in-between practicing full songs. It was something I didn't really even process as a full song until I played it as a loosely improvised encore at a show in California. After that, it became clear that it was the center of the album. I feel like it comes from a very honest place, and I like to think that comes across in the vocals and full feel of the song.

We feel also that your chemistry with Dan has increased, and his cello is “Water Dreams” second voice. Do you agree and how does he influence the songwriting and recording processes?
Dan and I have been playing together for the last five years, and he's been a big presence in my songs. I wrote “Water Dreams” with him in mind, making sure there would be space for him to breathe and we wouldn't be tripping over each other with these cluttered, ethereal melodies. Since all the instrumentation falls in the same mid-range, we've spent a lot of time learning to braid all the tones together to make one solid sound.

How did you two meet, by the way?
We met through a mutual close friend. Dan came to my very first show in New York. Our friendship started by driving around Manhattan and eating breakfast in the middle of the night.

You moved to Portland from NYC in 2012. Two quite different music scenes, or so it seems to us. What differences did you find in your personal experience, if any? How did this move influence your music?
It's very night and day. New York is a vibrant, charging force, while Portland is a quiet, shy town in a city's body. New York taught me to stand up for myself, but Portland taught me how to sit down and take space, which had a strong impact on “Water Dreams”. There's much more space in the songs for a listener to catch up or feel immersed in.

Is there a record in particular that influenced you in particular during the recordings of “Water Dreams”?
I listen to jazz at home nearly everyday. I think the piano style of Dave Brubeck and Bill Evans had a huge influence on “Water Dreams”. Both of them have such emotive phrasing, like the piano has its own language. That level of control has been something I strive for, and thought about a lot during this recording. How to push without being sloppy.

You are mostly self-releasing your records. Have you had any contacts with labels? Would you consider committing with one of them?
It's a very grey industry, so it's really hard to say. There's no stock contract or almighty label, but there are a lot of labels that have rosters I really admire, so if the right thing came along it'd be a consideration of course.

Some of the revenues of “Water Dreams” are going to the Sacramento River Preservation Trust. Can you tell us about this project?
I grew up in Northern California, and it's year by year becoming nearly shrivelled from the drought. I've been telling myself for years that I should be doing something to help with that, and this was the first realistic step I felt I could take. The Sacramento River Preservation Trust is a small non-profit working with volunteers to maintain a really important river for California.

You said you admire, in Joni Mitchell, her constant musical progression. Where do you see yourself in the next record?
I hope to keep altering the sound. Each record gives me a better idea of what I want to try next. I have a hard time verbalizing what I'm working on, especially during the initial writing. All I can say is I'm working with brighter, more defined colors.

You are in music journalism too. What has been in Robin Bacior’s player recently? Something we might have missed?
As I mentioned before, I listen to a lot of jazz, so at my house it's mostly old jazz, a lot of War On Drugs, Bill Callahan, and the new Father John Misty. I've also been listening to that self-titled album by Phox, it feels so bright and subtly full.
Discografia

Light It Moved Me