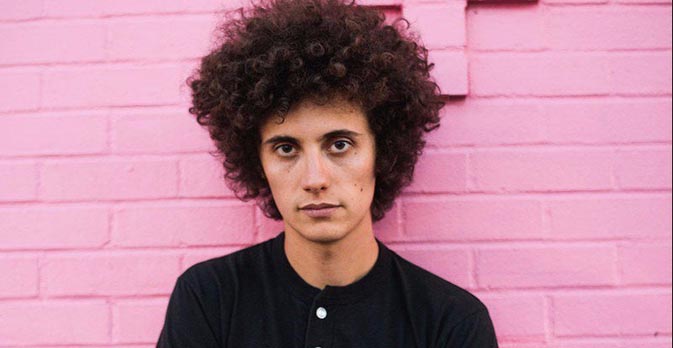 interview by Stefano Bartolotta
Tweet
We met Ron Gallo when he played at Magnolia, in Milan, on June 26th. "Stardust Birthday Party" is finished, but it's not possible to announce it yet. The conversation starts from here and goes through the artistic evolution of this project and the deep topics featured in these new songs' lyrics.

You released an EP earlier this year, and it was related to some aspects of the music industry, and now you have to deal with another aspect related to it, which is having a record that is ready and not even being able to announce it. How does it feel?
It’s OK, we just finished it, and we’ll be able to announce it pretty soon, there’s not too much waiting time between finishing and spreading out the word, it’s better than before, the previous album was done for two years before it came out. By, the way, how would you say “really nice guys” in Italian?

Ragazzi molto carini. Anyway, when this new album will be released, you’ll have three different releases in a one year and a half span. Did you write the songs in different moments or are you the kind of songwriter who constantly writes?
I constantly write.

So there’s not really a separation from the songwriting point of view in these three releases.
I think the perspective is different, especially with this one that’s coming out soon. Some of the songs in it were already written, but a lot of them are newer, but then it was about refining all the song to make them work together and have a similar perspective.

I think the biggest difference between the past releases and this new album is the sound, because here is much stronger and there are many more layers, I don’t know if you agree, and if so, I ask you to tell me how this new sound came up.
“Heavy Meta” was before we were a band. The new record, we have been a band for two years. We spent the last two years touring and playing the songs, so I think it sounds like the band sounds now. “Heavy Meta” was a bunch of different people, trying to piece it all together, while now we are a cohesive group of people and I also think our weirdness shines a little bit more. I’m trying to embrace more elements, being a little more experimental, while in the past I’ve been super inside the box.

Did you also work with new producers or sound engineers for this new record because you wanted this different sound?
We did work with an engineer, while previously Joe, our bass player, engineered everything. Me and Joe are still the producers, we just worked with an engineer, and it was different than what we did earlier, because we were used to do all by ourselves, and I think that helped, we were able to get to the sound we wanted, which is something between modern and classic, not overproduced, or too clean or too polished, but not sounding retro or old school.

I also noticed, in some tracks, a more detailed work on vocal harmonies.
Singing together as a group is not something we tried to do before, but since we learned how to do it, it was naturally happening in the songs.

On “Really Nice Guys” EP there’s a song called “Related Artist” where you describe fans or music critics trying to understand musical influences and often getting wrong. I think that, with this new widened sound, a lot of people will try to look for a lot of influences. I personally thought of glam-rock and punk-rock from the Seventies but also about Bob Dylan. In general, are you ready for a lot of name dropping that might not be spot on?
The thing about it is that song “Related Artist” is me making fun of myself and other artist who struggle with this identity thing, you know, people can be way off, but the whole point is making fun of it, because, you know, you can’t control what people hear, people hear things to their own filters, their own perspective of what they know. It’s a stupid thing to be upset for or concerned of. You put music out there, and it’s open for interpretation. About this new album, I’m curious of what people take from it, because I definitely know where we’re coming from, like you said that late Seventies punk stuff, but also Talking Heads, Devo, those are the major influences, but there’s a ton more.

Have you got a favourite song on the album? Maybe the ones that will be released as singles?
It was mostly a collective choice, we chose the songs we thought were the best message wise and also sonically, I like “Always Elsewhere” and “Do You Love Your Company?”, if I was to show somebody the record, I would start with these ones.

Can you tell me something about lyrics? I know lyrics are always important for you.
There’s a general sort of theme of giving death to your false self, to your old self, and making way for transformation and letting your true self emerge. A lot of lyrics are a sort of dialogue between your ego, your mind and your true self. We live in a world that is very mind dominated, and people don’t operate from their true potential, their true consciousness, it’s about shifting to what we really are, beneath ideas and minds and social constructs and identities. What is reality, which are the real delusions, what is wrapped up in our mind? We should try to strip away the false delusions in our life and to see what’s really there, and what I found there is that love and compassion are the most powerful forces in the world, so get out of your head and go into your heart and you’ll see it. I personally shifted from being an angry person to a more loving and compassionate person, destroying my false self. That’s what the record is about.

I often talk about your music with an American girl that I met travelling and I’m still in touch with, she’s from Austin and made me listen to your music for the first time. She saw you live several times and recently told me that the live band changed, that now there’s a synth player.
Yes, we have keys now, recently our tour manager and friend Alex started playing keys with us.

Will this be the setup when the album comes out too?
We might expand a little more actually, we’ve been a trio for two and a half year now, but I think there’s room for more people and more human power on stage to really get the songs across the best place. Maybe a percussionist, maybe… I don’t know, I still have to properly figure it out.

I really like the graphic style of the pictures you post on Facebook, I mean the artwork of tour posters and music releases, I think it looks retro but at the same time fresh and original, it’s not definitely standard. Are you the graphic designer?
Yes, it’s me, I do all the work for that. I like the idea of making it look like my brain, I’m not a good graphic designer and I’m not a good artist, but I think what it does is looking like me, it comes from my perspective, it’s create a sort of shitty thing but I like how it looks.

When you announced this Italian tour, you said Alessandra Mastronardi had free entrance to all shows, did she show up?
No, and I don’t know if she ever would, I saw her on a TV show called “Master Of None”, a comedian TV show, and she’s just wonderful, so, because she’s Italian, I made this kind of joke, Alessandra, if you see this, come to any show for free!