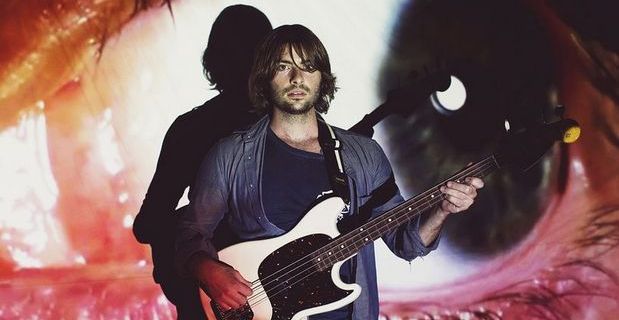 interview by Stefano Bartolotta
Tweet
After a long absebce (six years), Rooney are coming back with a new album. We used this immiment release as an opportunity for a Q&A via email with leader Robert Schwartzman. His answers show a world made of hard work, but of passion and good times too.

This new album was performed almost entirely by you, but there are other musicians credited. Did they give some ideas about the sound building or did they just execute your plans?
I usually work alone in my studio and kind of hide away, get in the flow, etc.. Making Washed Away, I recorded it in phases and collaborated with different musicians. Some of the songs were recorded live and some were recorded with just live drum and bass, where I’d play bass along with Joel on drums, and I’d overdub the rest alone. So it was a mix, depending on the song. I had time to keep revisiting the sessions, go back and challenge the songs and the recordings, so I could gain some clarity by taking time away and then coming back to the songs.

In the past, Rooney was a proper band with a permanent lineup, now it seems like your own project with some guests. Does this difference change your approach to songwriting, the way you write songs?
The way I write songs is I sit at the computer, or with a guitar, or at the piano and I just start writing. I see where it goes. Or I just start recording, laying down a beat, and then building the song as I track. I think everyone I play with brings a style to the recording process, but I think the way I write songs has stayed in line with how I’ve always written songs. That’s not to say I’m not trying new things with my writing, but it means I write mostly alone and approached this like past Rooney albums.

About the sound, the biggest difference from the past are the synths. Do they come just as an influence of your other project Starsystem or are there other reasons?
I love synths and use them on all my albums, some songs more than others. Washed Away has synths on different songs, but it’s a more guitar centric album. That was sort of the idea going in, to make a more guitar focused album. It’s a balance, and a choice when and where not to use synths. Certain synth sounds feel right and some feel foreign to Rooney.

Listening to the album, I can hear that the songs with the most complex sound and more synth-driven are at the beginning, and after a while, guitars and immediacy emerge. I think it’s a good idea, because, thanks to this, songs fit perfectly one to another. Did you actually do it on this purpose?
Yes, and it’s cool you notice this! I worked for a while on the album sequence, something I obsess about on all the albums I’ve made. I listen to the album from top to bottom every time I make a sequence change to check that the feeling, the momentum is building and it takes the listener on a musical journey. I divide albums into 2 sides: A and B. And I open A with an impactful song, and close A with something that is a nice end to A. And the same goes for side B.

About vocals, I hear many more harmonies and backing vocals. If you agree, tell me whatever you want about it.
I love the sound of harmonies and layering my voice. It’s just a sound I’ve always liked and when the harmonies are right and work together, it can really elevate the music. There’s just a beautiful feeling to harmonies, stacking a voice, and this warm, emotion that breathes in the music. I grew up listening to bands that arrange music with lots of harmonies (Beatles, Beach Boys, the Doo Wop groups, ELO, Queen) so I guess that’s something I’m just used to hearing in music.

Probably, this is the Rooney record with more variety, because of all the things I mentioned in the previous questions.
I think variety is good and can keep the album interesting and diverse. The opposite can also happen to some albums and artists where everything sounds the same on an album. I just want the listener to find something in every song that is different from the others, that has its own personality. It’s nice to hear when people appreciate the different songs, the vibe all around, and that each song offers its own thing.

I have the feeling that lyrics are more similar than music if you compare all the albums, do you agree?
I guess so…you are very good! You seem to pick up on things that I’m not aware of or thinking about. But yes, now that you say it, I guess so. Maybe it’s because I’m writing them or just have a tendency of how I write lyrics. But I’m not trying to hold onto some lyric approach from album to album consciously.

You say you didn’t want a song or few songs to be clearly better than the other ones, and I think you accomplished this mission. Did you work on a lot of songs and discarded some of them, maybe even if they were finished, or did you just focus with particular care and attention on the songs we can hear on the album?
I’m pretty selective with the songs I put on an album. I don’t like to just add a song without the song adding something meaningful or exciting to the album. I went back many times and kept changing the songs, taking songs off, and adding other songs until this album came together. Once it’s out, I can’t take it back or change it, so I think I get obsessive about it because it’s hard to let go of it. Specifically about the songs, I just try to go with the songs that add something to the album, try to mix it up, and make sure every song is given the proper time and care to be what it wants to be.

I think that Rooney’s albums show your age, the eponymous released in 2003 clearly comes from a man in his 20s, in this one you can feel you are adult, do you agree?
I appreciate that and I’m glad you hear some growth in all these albums. I was 17/18/19 years old when I wrote and recorded the debut Rooney LP, and then in my late twenties/early 30s recording and writing Washed Away, so I’m happy the music can grow with me and vice versa. I don’t know the answer to this, some artists want to stay young sounding and might try to write younger. I just write what I write in the moment.

I saw you live just once, in 2007, it was very good, what can we expect from Rooney’s live shows in 2016?
I’m having a really great time performing this new album and playing all the Rooney songs from over the years. All the music is still a part of the live show today, embracing songs like I’m Shakin, Blueside, When Did Your Heart Go Missing, etc.. The whole point of the live show is to let go and let the moment take over, the energy from the crowd, from the power of the PA, being on stage, and letting the music speak. So I love playing all the songs, getting the audience involved, mixing the songs form different albums together, and creating a welcoming atmosphere for everyone to play in. When I’m not performing, I’m not doing everything I love. Hopefully you can come see Rooney again soon! Thank you for the questions!