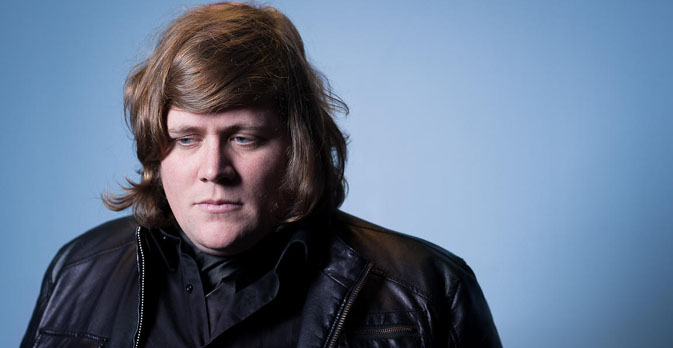 interview by Alessio Belli
Tweet
Is the cover photo of "Eiskeller" a tribute to Bowie's "Low"?
It’s funny because you’re the first person doing a link with David Bowie‘s Low cover. To be very honest with you I had absolutely not David Bowie’s cover in mind when I chose my cover. It may be an unconscious act. Lucky me it refers to such a great album of his.
Between the previous “Let it Glow” and "Eiskeller" there are six years: what happened in this period?
Well right after releasing my second album I went on tour for almost two 1/2 to three years. After the big tour with the full band I did a smaller tour just me and a musician where we played the songs in their demo version. It was an incredible experience. Then I started working on music for movies, I wrote songs for other people, and then rented this incredible place in Brussels where I packed all my instruments and started working on my album. Looking back it’s incredible to see how long it takes to make an album and believe me I’m the first person who would want to release my albums every six months, but it takes time especially on this album where I did things differently. Time was a crucial ingredient in the process and not rushing things was the only way to live this experience and the recording fully.
Is "Eiskeller" the end of a trilogy, or a new opening chapter?
I think it’s too soon for me to see if it’s the end of a trilogy or a new opening chapter. What I’m sure of is that it’s part of the story that started more than ten years ago. My three albums are definitely related, almost as a brotherhood. All three have similar ingredients and can relate to one another, therefore it is a trilogy. I can’t tell if the next one will fit in this family or not, time will tell once again.
What I’m sure of is that every album is a new opening chapter, just knowing that you’re going to play the album live and see it grow in peoples life, this is very exciting.
"Eiskeller" was born from loneliness, isolation, just as the world was dealing with these feelings, due to Covid.
Strangely enough I always lock myself down when I do an album. Maybe for the first time my life I was feeling connected in my loneliness with the rest of the world despite the drama of this pandemic. What i feel is that this album definitely helped me cope with what we've all been going through.
A record born in an icebox, but actually very "warm", right from the initial "To This Tree": were you looking for this contrast?
Yes, I can say that I’m definitely a man of contrast. I found myself being very excited In my struggle against this huge and cold place where I decided to settle down. Only Music gave me warmth and in the end was my best tool against this hostile environment.
The approach reminded me a lot John Lennon's "Plastic Ono Band".
This reference is one of my all-time favorite piece of music. I am a great fan of John Lennon’s work, especially with the plastic Ono band
Can you tell us about the compositional aspect of the songs? It is a very varied album from an instrumental point of view!
Having more time enabled me to work on the songs in a different way, I took a lot of pleasure going into details in terms of songwriting. The approach was the same but having less pressure due to the time I had and the space I was in, the craftsmanship put into details gave the songs another dimension.
What's the "Eiskeller" 's moment you are most proud of?
There’s so many moments that come to my mind. The whole experience it’s just a series of little moments, intimate moments that I will never forget. I think today the thing I’m most proud of is having being able to finish the album and to see that I’ve been able to capture exactly my every day work and put it into Music.
Except the music, artistically speaking, what kept you company during the making of the record?
Spontaneously, I would say that my instruments were my best friends during the conception of the album and that throughout the months spent recording the place itself became a partner and a friend. Even the industrial rude I was working in became a source of inspiration and had an artistic feel. Anything can become inspiring as long as you give it time.
I saw the news of the first live shows: what will be the approach, the organization and all the emotions and thoughts in returning to play live in this "particular moment"?
I can’t wait to go on tour. I will definitely try to keep the same energy and spirit for the gigs. I try to avoid the comfort zone, therefore I’m really excited to hit the road with just one musician. It’s going to be just me and a drummer. His name is Antoine Boistelle. We are thrilled even at this stage just rehearsing the songs and truly excited by the way they sound. Can’t wait to share this with people.
Who is the subject of the final song, "Woys"?
This song “Woys” fitted perfectly at the end of the album. Not only is it a song about the strange process of  songwriting but it’s more specifically about this strange moment when some close people start thinking that the song is about them when it’s not at all. It’s a bit strange and at the same time fascinating how a song can have a personal reflection in people's lives. So the chorus has a bit of a wit saying "You are the one you are the chosen one" etc. Great song to play live as well.
Discografia