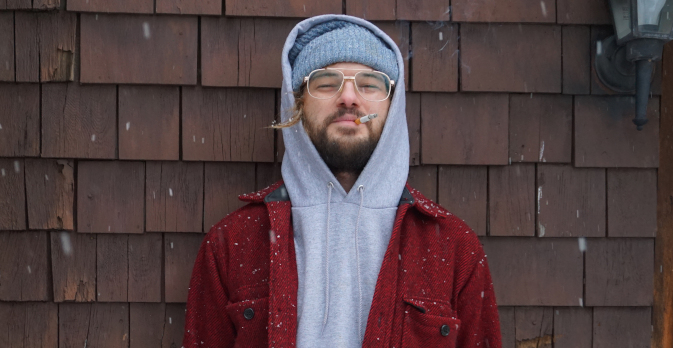 After a period of mental rehabilitation, the guitarist/songwriter from Illinois moved to New York and created his personal label Husky Pants Records. Now he is finally back to the music scene and released on April 2 his new record "Course In Fable", recorded with the help of a Chicago scene veteran, John McEntire, behind the mixer. With a mix of happiness and emotion, we contacted Ryley Walker for a pleasant exclusive interview that touched on many topics: from the evolution of his sound to his stylistic references, through the seeds of the new album and his future projects.

Hi Ryley. First of all I have to say that we are so happy that you're back. You’re a great worker and I guess that it was not so easy for you to take a pause for rebuild yourself. What was the spark that inspired you to start working on a new album?

I'm happy to say music is better than ever. I did a lot of soul searching and have found lots of joy everyday. That inspires me to continue creating music.

In my opinion your music has 2 faces, and I always found this attitude very exciting and fascinating. It’s a natural process for you to create the incredible and adventurous balance between experimentation and classic structure?

All of my favorite records always push boundaries. I love breaking the rules. It is very important to never do the same thing twice.

From ancient folk to Derek Bailey, passing through the Chicago’s scene of the 90’s full of impro-jazz and post-rock suggestions (from Gastr del Sol to Tortoise). Did you choose John McEntire as engineer and producer to capture this atmosphere? John was without any doubts one of the architects who built that “Chicago sound” with Tortoise, Sea And Cake and other projects.

I have been a fan of John's work for many years. For him to produce this record is a dream come true. He is very helpful and friendly. His atmosphere is hi-fi and clean. I wanted very much to have a bright and clean sounding record.

You moved to New York. In what percentage your new travels and experiences are deeply inside the new album and why did you relocate in NYC?

I moved to NYC three years ago. I am very happy to be here. I love big giant cities that smell bad. So here, I am comfortable. This record was mostly inspired by being trapped in New York, I have traveled very little recently, like everybody else.

The new album is easier only in the surface, a sort of challenge for the listener that has to be very attentive to capture every single detail. I have found it very emotive and different from the others even if, at the same time, is marked by your own distinctive style. What was your goal in writing “Course In Fable”? And how it differs from its predecessors.

For this record, I wanted there to be authenticity and honesty. This is the closest I have gotten to that goal. Its my own sound and style. I am very proud of it. My goal was to make something more electric guitar driven, and prog inspired. I am a very big fan of Genesis. I wanted to have an album from start to finish that had an overall narrative of paranoia. The songs were all written on acoustic guitar- but I imagined them as large epic rock pieces. They were all rehearsed and demoed, so there was no guesswork in the studio. We were fully prepared, which has never happened while making the previous records.


How you see your musical journey and changes in stylistic directions from the 1st album to the last? I’ve noticed a significant progress in your singing performance, as you seem now having a great confidence as a vocalist. Am I mistaken?

My singing has gotten much better, yes. I'm not professionally trained in music or performance. Everything I've learned is from playing shows and practicing at home. I have been doing that for 10 years now, so hopefully, I get better! My singing is much more natural and relaxed. I should quit smoking, maybe that will help too!

Many people think about you as a songwriter related to the british folk scene of the 70’s, but it’s a very superficial vision because your music is still in continue changing. From the beginning, your goal was to transform your old musical passions in something deeply personal and non conventional?

I am a huge fan of british folk music, but it is important to always be progressive artistically. I get bored very easily, so I need to challenge myself. I hope to change with every record and phase of my life. I cannot sit still! Now, I am obsessed with Prog Rock from the UK and Italy. Genius work!

You always loved working with other musicians. I think about Bill MacKay and Charles Runback for example. Collaborations between musicians were the core of the Chicago scene in the 90’s. Tell me about your actual partnership with David Grubbs. Are you planning to record a cooperative album after playing together in the iconic Café OTO? Maybe he is one of your musical idols (surely is mine) as he started with Bitch Magnet and then changed his musical vision from Brise-Glace to Gastr del Sol to his work with jazz giants as Rob Mazurek and Mats Gustafsson.

Improvising with other musicians is my favorite music to play, without a doubt. This is a great Chicago tradition. I'm happy to have been a witness to so much of it, and play a bit of it myself. To play with David Grubbs is another dream come true. He's a brilliant artist and friend to have. We have recorded an LP together, which I have plans to release this fall. It's an honor.

What are your inspirations when writing your lyrics? They are always deeply layered, sometimes abstract and cryptic, even with a dose of dark humour . Sometimes is not so easy to understand the meaning, maybe because are very personal. How did your lyrics change in the new album? Maybe they are more referring to your last years personal events?

I'm always inspired by a stream of consciousness paranoia. City life, walking in the cold, depression, and drugs. All very personal, but hopefully can relate to other folks.

I’ve always associated your music to some labels you seldom worked with. I think about Drag City or Thrill Jockey. Your brand own new label Husky Pants has the goal to be like these ones? Or you’ve created it to have full artistic freedom and to launch new artists?

I am very happy to have my own label. It's small, but rewarding to do. I enjoy the creative control, and opportunities to put out my friends' music. I have been helped out greatly by labels in the past- but for now- I enjoy working on my own terms and timeline.

I was always very curious to know some artists tastes in music. Sometimes i was shocked to learn that some of them had totally different passions from the music they play, as i felt a little bit dizzy when i saw that “The Lillywhite Sessions” album was fully dedicated to the music of Dave Matthews Band. Half-joking you said that you were inspired by Genesis. But which era of Genesis? The most interesting Gabriel’s era or the pop Collins’ era? And what are your favourite bands and artists ever, which you were or are still a fan?

Genesis is my favorite band ever. I enjoy both Peter Gabriel and Phil Collins eras. I like it all. Does that make me crazy? Yes. I am proud to be crazy. My favorite bands besides Genesis are: Sonic Youth, Sonny Sharrock, Thinking Fellers Union Local 282, Electric Miles Davis, Gastr Del Sol, Papa M, Led Zeppelin, and Pink Floyd.

What are your opinion about American politics, especially now after last year that was marked by the Black Lives Matter movement, the fall of Trump and the handling of the pandemic?

We are a deeply sick nation. God help us.

What are your plans for the future?

I loved the work of LeRoy Bach and Cooper Crain (as I am a fan of Wilco and Cave) but I think you have great musicians now. You worked with Bill MacKay and Andrew Scott Young in many others occasions and during the “Deafman Glance” recording and Ryan Jewell was one of the drummers in “Golden Sings” and is obvious the perfect interplay between all of you. Do you think you’ve found the perfect band mates? Why did you choose to insert some strings?

Yes, all of the band members are old friends who I love very much. We have a great working relationship built on trust and musicality. I wouldn't have anybody else on the record. They were my first choice. The strings were added by John, he was smart to do so. They added lots of dramatic beauty to the music.


Thanks a lot for your patience and willingness.

Golden Sings That Have Been Sung