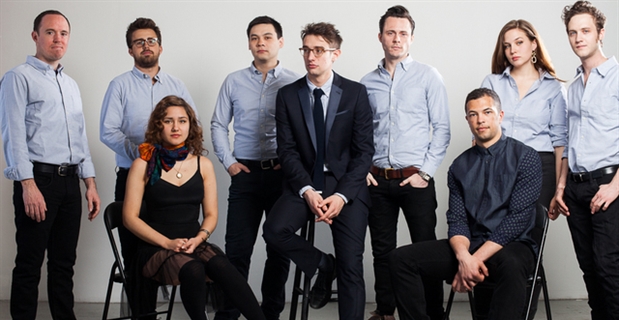 As soon as he finished college, Ellis Ludwig-Leone moved to Banff, under the Rocky Mountains, to compose his debut as San Fermin, which projects him on the footsteps of the greatest pop composers of the latest years, from Sufjan Stevens to Jim Guthrie.
Between New York understated elegance and natural grandiosity, "San Fermin" has been received as one of this year's breakthroughs in the independent scene: here goes its story.

You decided to retire in a remote place in Alberta to compose your first record. I guess you are aware of the amount of mythology this brings nowadays. Did you need complete isolation? Wasn’t it difficult to conceive a partly orchestral album without a proper studio (if you didn’t have any) or such?
The reason I went to Alberta was actually my mother; she had gone out there to paint for a few months when I was young.  I visited her once and remembered Banff being a really lovely place.  When I graduated from college, I had the idea for this record, and I figured if I could follow in my mother's footsteps, that would be a good place to start.  I had a little mini-studio up there, and there were lots of classical musicians nearby, so I had all the resources I would need.

I was in Banff myself and sometimes I imagine your music floating in that awe-inspiring valley. How much did that environment shape “San Fermin”? And how did it mix with your Brooklyn native habitat, which is probably more evident in the record?
The music was definitely shaped by the place.  Every day I would eat my meals while looking out at the mountains, and I would hike them on most afternoons.  There was an element of grandiosity that came with the setting, it was almost ridiculous, to write a song and then climb a mountain.  It was definitely elevating.  Once I got back to Brooklyn, then it was more about turning a critical eye on to what I had written, trying to distill it into something that was a little more understated and sharper at the edges - "Sonsick" and "Crueler Kind" were actually written as soon as I got back to New York.

I try to connect your name and artwork to the music, but it doesn’t fit completely. Can you help me?
The name comes from the San Fermin Festival, also known as the Running of the Bulls.  There's something heroic about it, like, it's totally ridiculous and over-the-top, but these people are trying to feel something, even if that means putting themselves in danger.  That was kind of a starting point for me... how we pursue things that make us feel alive.

The strong dichotomy between “male” and “female” songs in the record is even surprising, while listening to the record. I recall listening to “Sonsick” the first time, and checking whether the new Beyoncé single had finished in my playlist! I mean in a positive way, of course.  Was this distinct differentiation clear since the beginning?
Yes, the male/female interaction was built-in from the very beginning.  I knew that I wanted to span a lot of different styles with this record, and having the female and male vocalists allowed for a lot of stylistic variation between songs.  That also worked in with my idea for their dialogue, which required the two singers to live in very different worlds as they argued some of this stuff out.

I read you have now rearranged the songs so that you can play them live with less members. How do they sound? For instance, which is the song which sounds more similar to the record?
Stripping the songs down was such a difficult process at first.  It was like, how can I possibly live without all these trombones!  But then I realized it was actually a really good thing; my tendency is to overdo it and it was helpful to strip these songs down just a bit to discover the really important lines.  And we still have eight musicians playing live, including brass and strings, so it has the same orchestral feel.  I would say Renaissance! has the most similarity to the record, just because it has all those solo instrumental moments.

“San Fermin” is an ambitious, long record but I like the fact that it’s still very much based on intimate themes and relationships (even though there’s the Hemingway reference, OK). Aren’t you tempted by some more “majestic” theme, though? Like a real concept album (or a series), something theatrical for instance? Or some opera work, maybe?
I would love to do an opera some day, though I have to say I haven't spent the time with that genre that I would need to in order to write something good.  It's hard for me to imagine writing something fully narrative like an opera, because when I listen to music usually the lyrics are the last thing I listen to, so it would be hard to prioritize the words enough to carry out a coherent plot.  But if the opportunity came up, I would be hard pressed to turn it down!

I loved the record, even though stylistically I find it more a blend of different important artists of these last years than your personal expression (which of course is there for all the other aspects). How much am I wrong, and why?
There's a lot of clear influences on the record, mostly because, this being my first album, I was trying to vary the stylistic palette a lot, and I turned to my favorite artists in an effort to cover a lot of ground, to try to find where my own sound might fit in.  My hope is that, even if there are a lot of influences in there, that the entirety of the record creates its own world.  It's like a big room with a lot of different furniture in it... a trumpet solo here, a female pop song there, a male folk song somewhere else.  The challenge was to make a record in which all that wildly different stuff fit in according to some kind of unifying logic.

What are your touring plans, especially regarding Europe and Italy? If you could choose, would you prefer standard venues or theatres?
Definitely we prefer standard venues at the moment.  The energy from a standing crowd is palpable, and helps you perform the music with more energy and conviction, whereas with a sitting crowd sometimes you don't really know how they are enjoying it.  We are currently on tour in Europe, touring the UK and Paris.  We're here until November 13th-- our album comes out on the 11th-- and then we don't know.  I am pretty sure we'll be back in the Spring... I certainly hope so! Europe has been amazing thus far.