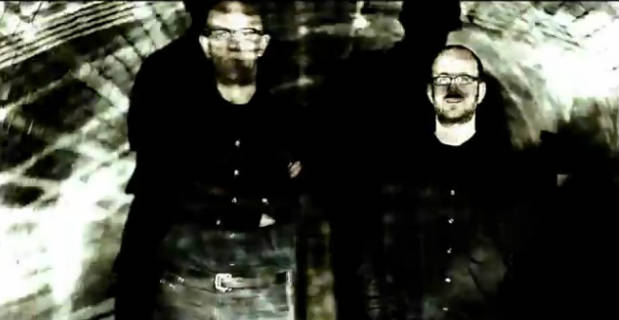 interview by Matteo Meda
Tweet
Again a great album, in my opinion your most "dynamic" one. Do you agree ?
Many thanks! Dynamic is a good description. We increased the tempo in most tracks, but we tried to keep a certain melancholy, which is special for us, for the whole album.

Can you explain a bit some details about how "Messias Maschine" has
born, also in comparison to "Gottes Synthesizer" and "Sequencer Liebe"?
The main difference is, that we invited guests to join the album. I'm a fan of Harald Groffkop's album synthesist from the 80s. We once met him at one of ours shows and the idea was born to do something together. Later we also contacted other musicians to join us. So we got a nice krautrock-heros mix of great contemporary artists. That collaborators gave great impulses and some changes to our new release.

And the title, what does it mean?
The "Messiah Machine" is a machinery which really exists. It is a kind of Perpetuum Mobile to produce power based on a water circuit. We are working on a slightly different model to produce hits.

I noted you flirted a bit with some new rhythmical structures, but also with much more relaxed atmosphere, is it true?
It was our aim to find a good mix of both. When you do a double album of 66 minutes, you cannot do the same in ever track. Each song should be different, but in the end it has to follow a red line. That way isn't always easy to find.

Your previous album was an homage, yet in the title, to the sequencer, and you used it a lot in its tracks. The other one was instead a possible ode to the synthesizer. “Messias Maschine” seems to have a much more organic approach, as you probably played all the instruments with your hands. Is it true? What instruments in particular did you use?We used the same synth gear as on the other albums, but before, I just used 80s electronic drums, so this may appear more synthetic. Now we’ve got three different drummers (JAKI LIEBEZEIT, HARALD GROSSKOPF, A. E. PATERRA) on Messias Maschine. All played accoustic drumsets and that gave a more organic touch to the music. And we added some new instruments as Saxophone and a Theremin.

I think also you reduced the "dark" element in your soundscapes, and that's can be seen yet in the artwork... Has it been a choice or you just followed what do you felt to do?
It was not our intention to make the whole look more „friendly“. Maybe it is just cause of the influence of the guests. If you listen to the title with ULRICH SCHNAUSS, this may sound a bit less melancholic than other tracks, but we like it anyway. This is the first real pop song we did, but also the only one on the album.

More in general, can we see your last three album as linked by a thread? The artwork for example seems to suggest this vision... Can we see them as a sort of trilogy?
Yes, the last 3 albums have been done with the wonderful artwork paintings by spanish painter, Salutsiano. This was meant to be a trilogy and is closed now. We started with a red cover, did a black one and now we released our white album. We will do a new concept for the next release with different artworks and maybe also different sound, but we do not know exactly yet, in which direction this will go in future.

You are working today with sounds that are strictly linked with German'selectronic music history... Is your music influenced by German's scene?
Fourty years ago these German electronic pioneers like Kraftwerk, Klaus Schulze or Manuel Goettsching really invented something. They didn’t just copy the English bands as most one did those days. I see a link going in that direction. We do also not want to be a copy of someone. But to do really something new today, is impossible. So we mix the best of the past with contemporary electronic music.

Is also for this that you are still using german language in your titles?
We started in 1999 also with German vocals on our first release. So we kept the German titles although we do instrumental music now for more than 10 years.

And what are the musicians of the past and present you feel as your main inspirators?
If you ask for name dropping, we should name Robert Fripp. His special guitar sound may remind of our ones. For me he is one of the best guitar players ever. But we can be lucky that we got most of our inspirators on our new album!

Do you find it hard to maintain this sounds alive? Here in Italy some people still love them, but it's very hard to find groups who tries to go in this direction...
Well, the scene for krautrock is not so big. We also see that in Germany, when we visit concerts or other gatherings, you always meet the same few people. But we can be lucky to have listeners from other directions as Metal, Ambient or Electronic music.

In this sense, how has been important for you to get in contact and then work with Denovali?
Denovali opened definetly some new doors for us. They care a lot for good looking artworks of their releases. For the first time we had the chance to do vinyl in special gatefold covers, coloured vinyl, etc. Another good thing about them is, that they just care about the quality of music and not about genre. They publish everything they like, however it is Ambient, Metal or Classical.

Are you going to bring you album on stage for live concerts?
Yes, we are currently working on this. As you will understand, we can’t take all the collaborators of the album with us on tour. So I have to drum the parts, which for example Jaki Liebezeit did on the album. Now I really know why he is called one of the worlds`s best drummers. This will be still a hard piece of work for me. We will tour with our great labelmate Greg Haines in September. But unfortunately just in Germany and Belgium. Hope that we`ll once have the chance to come to Italy!

And, are you going to follow the "tradition" of the last three years and publish another album next year?
I guess this time we will need a bit more time for the next one. Till end of the year we will concentrate on touring. Beginning of next year we will start to work on new stuff. We will see than how creative we will be.
Discografia