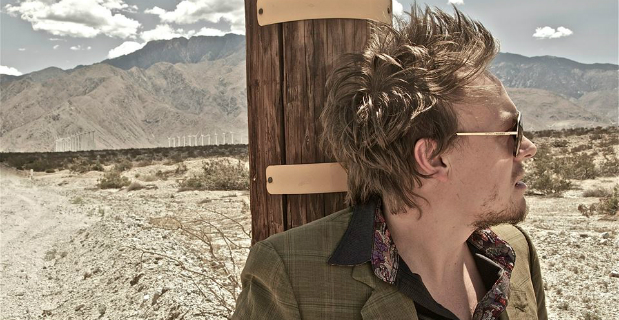 In orbit around the music universe

Satellites is one of the musical projects that more involved and fascinated us in recent years. English-born, Copenhagen-based Johnny Vic is the man behind the whole thing. We contacted him because we wanted to know more about him, his music and Satellites' future.

Hi Johnny! Thank you very much to share some of your time with Ondarock. 01 and 02 have been a constant soundtrack for me in the recent years. But I would like to start from the beginning, because few people in Italy know who you are. You were in a band called Budapest which released a couple of records with a pair of minor hits. What are your memories of those days?
Well they are mixed memories really. I had a terrible time with my management and record label at the time and the band suffered some terrible setbacks, especially with the suicide of the guitarist a week after we finished the first album. So unfortunately the overriding memory is not a good one. But there were some amazing moments also. Anything to do with the music is a great memory. I still remember thousands of people singing the words back to me at Benicassim Festival in Spain, where we had a top 10 hit. Fantastic moment. And hearing the record played back in full for the first time at Real World Studios through the big speakers... I will never forget.

After that, you went solo, recording other records as yourself and then you've become a father. It was that the spring that made you conceive Satellites right?

Yes 100%. I recorded 2 albums under my own name, when I moved to New York after the break up of Budapest. Although I’m remain very prod of these records, I was still finding my voice and finding myself in New York. It took becoming a father to flick a switch inside of me that I never even knew was there. As soon as I forgot about trying to please other people and just made the music I wanted to make, with my new-found view on the world we live in as a father, it all seemed to fall into place and SATELLITES was born. I literally wrote ‘In a City’, the 1st track from the 1st album, the day after my son was born.

You said that you "wanted a project that was faceless and anonymous, to make the music the focus". I think you did it well. 01 was really only about the music. Have you ever thought that, using your real identity, you would have been able to get more push? Any regrets?

I’m happy with the way it has gone and I think it was the right choice. There is way too much focus on personalities in music, which really shouldn’t have any bearing on whether the music is good or bad. Inevitably, as people started to get into SATELLITES they wanted to find out more about the person behind it - which was always the plan. I wasn’t necessarily trying to hide away. I just wanted the first impression to be all about the music. Now with the release of the 2nd album I fully expect people to want to know more about me and I am cool with that. I just hope people are not too disappointed…!!!!

I remember that, at the time, I wrote that your record was heavily influenced by The National and British new-wave. You covered Kraftwerk's The Model shortly after 01's release, but you never mentioned The National. Have you any connection with them or it's all in my mind?

I love The National and, yes, I sing in the same register as Matt Berninger, so the comparisons were bound to come. But it wasn’t a conscious thing. I have always been a huge Scott Walker, Talk Talk and Radiohead fan. To me, that is much more where I am coming from than The National. But any comparison with them I understand and take as a compliment.

I think that 01 it’s something about homesickness, about the distance from loved ones. There is a sense of bewilderment within. Am I right?

100% right. I moved to Copenhagen as soon as I knew I was going to be a Dad, so to be in a city where I didn’t speak the language, a long way from home and as a new Dad without any of my family or friends around me, I was very homesick indeed. Then after 6 months of that, I went on a world tour with James Blunt which meant I left behind the small amount of stability I had newly built up. The feeling of isolation was raw. And this is the time I started recording 01 on the road.

Rough Trade has given you a boost right from the start. How did it happen?

Rough Trade have been amazing and their support - unwavering. It was my manager who introduced them to my music and they have supported me ever since. I think they just 'got it' immediately. It has been incredibly important to me. Especially at the time of 01, as outside of friends and family and my manager, they were the first people to hear it and their support helped me realise I was on the right path.

02 came less than a year later.and, to paraphrase one of your songs, it’s something bigger. It sounds more glorious, as if you had found more stability in your life. Do you remember anything in particular of the creation process?

I actually never stopped writing after 01, so 02 comes from the same writing pool. Lyrically it’s slightly more opinionated and outspoken. I was recording 02 when 01 was released and the great press and feedback gave me a confidence boost that I think is audible on 02. I am singing much more openly and experimenting musically a lot more. I wanted to push myself more musically. To expand the musical landscape without losing the core values. And on a personal level, I think 02 reflects that I was starting to get my head around being a Dad and I was more settled in Copenhagen.

After a bit of time since it was released for the first time, 02 has now a worldwide distribution. It means that soon we'll see you involved in a tour as Satellites?

I certainly hope so. We are talking to some agents now about possible European dates next year. I would love nothing more than to get out there and play.

Speaking of tour, you play bass in James Blunt's live band. You're involved now in a big tour across the world, treading big stages. And you played on Leona Lewis' "Run". I can't imagine two artists musically more distant from you. How do you put these things in relation to your being an independent musician?

After many years as a struggling musician living on open mic nights and busking in the street, to be able to make a living playing music of any kind is something I don’t take for granted. I am in a very fortunate position in that I get to play music to pay the bills. I remember in my Budapest days having to busk until 1am in Stratford Upon Avon, so that I could pay my rent at 9am the next morning, and then not eating for 2 days. I don’t want that anymore and I definitely don’t want that for my son. Many people I know who have their own projects don’t have the luxury of music being their means of income. There isn’t the money in the music business anymore, where an underground artist can provide for a family. It’s not right, but it’s the reality. Playing for other artists is what I have to do to be able to make my own music. For now anyway.

You started a blog, through which you share your thoughts while you're traveling around the world. From there, I found out that 03 is almost ready. Can you give us a preview of the direction you are taking? I saw that you're recording almost everywhere..

Yes 03 is recorded. I’m mixing it as we speak. It’s a very big bold album. Again, not bowing down to industry rules. It’s the album I wanted to make and if I’m honest, the album I’ve always wanted to make. It has all the elements from 01 and 02, but in higher doses. Real brass, real strings, electronics, pianos and guitars etc etc. I wrote it during a 2 month stay in Los Angeles last year. I found the city incredibly inspiring and the desperation and the ‘last throw of the dice’ mentality of the majority of people there adds a very unique, special energy to the place that I found fascinating. Unlike any other profession, to make it in the entertainment industry, you don’t necessarily have to be the best in your field. So the beggar on the street or the guy dressed as spiderman having his picture taken for money on Hollywood Boulevard could actually be just as good, if not better than the people we see on the TV or in the magazines. Having LA as its theme has focused the lyrics a little more than the other 2 albums. I recorded the basic bones of the tracks, the drums, pianos etc in the UK. And then I have been recording the rest on my laptop all over the world as I tour with James Blunt. I travel with my mobile studio and set it up everyday wherever I am.

What's your favorite Satellites song and why?

Railway Line is my favourite. Musically it really does it for me; it has elements of everything that I like. It also feels like the moment in my writing when I left my past behind and the new Johnny emerged. It felt that way when I was writing it. And when I recorded it. And I still get goose bumps whenever I hear it. I especially love the Saint Saviour version with the choir.

Thank you very much Johnny. All the best for your future.

Anytime and once again, thank you for your support.