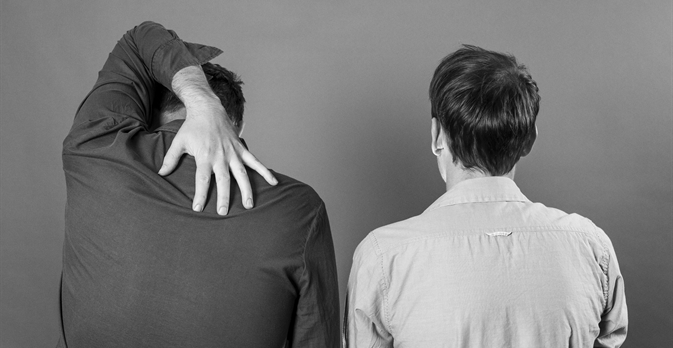 First of all, thanks for your time and for your music. So, I was probably a bit rash in writing that, if someone were to reverse your discography completely, really few would notice. I admit I mostly knew “A Minor Revival” before “Little By Little”, so I had to catch up with the rest of your beautiful career. I was taken slightly aback by the intensity and passion and urgency that radiate from “Little By Little”, so that came to my mind, while I was writing. Am I blabbering (that’s possible) or do you recognize yourselves, at least a bit, in this assessment of the new record?
Karl Smith: Ha ha. Yes. We don’t follow trends at all so I guess you could easily switch the order of our albums around without it being obvious. When we make an album we always just try to follow the songs rather than some new concept or style of arrangement. One thing we have always agreed on is that we let the songs have enough space to speak for themselves. They need space to breathe so they can work together to create something unique.
My favourite albums are still the ones that focus on the songs rather than a new sound or texture. They are the albums I return to time and time again  – "Nebraska", "Blonde on Blonde", "Our Mother the Mountain", "Songs of Love and Hate", "Pink Moon", "Bakesale", "Comes a Time"... the list goes on.

And yes. I do see that in this album. In fact, intensity and urgency are two words that a number of journalists have used when describing the new album. The last few years have been a very intense time for both Pete and I so it’s no surprise that it is reflected in the music.
The stories in our songs are always informed and affected by what we’re going through personally. Getting older is not easy and family life brings not just joy but also a new level of complexity into your daily life. This coupled with the precarious political situation playing out across the world, means that there is a lot of energy and emotion flying around when we play.

An obvious question has to be, after side projects and solo albums: what sprung the reunion and a new record, after a six years hiatus and more than ten after your previous release as Sodastream?
It was quite a strange thing really… Pete and I began playing together again in 2010, it think it was, but it was in another band – a five-piece called Lee Memorial.  We were working on our second album but the other members of the band kept being too busy to show up to rehearsals so in the end it was just Pete and I coming along. We thought ‘this is weird and surely it’s more Sodastream than Lee Memorial’ so we put the electric instruments down and picked up the acoustics again. We played around with the songs from our unfinished album and it all started from there. Fast forward three and half years and we’re finally sharing the new album with the world.

How was it to get back in the studio together? You can feel a special energy in the record.
It was a great feeling to be back in the studio with Pete and our long-time collaborator Marty Brown, who produced the album. When you’ve played music with friends  for a long time there is an effortlessness to proceedings that you don’t get with new projects. You don’t have to talk about every little detail… you all just know when things are working and when they’re not. It’s not to say there aren’t difficult days but there is a real joy in the creative process even when you’re facing challenges.

I also think getting older makes you appreciate the process more too. It’s not just another record. It’s a moment to be still and embrace a creative vision together. You let go of the every day so you can focus on the stories in the songs and together you bring them to life the best way that you can.

Were the songs written specifically for a Sodastream album? It was great to see how you crafted a sensibly different sound and style in your solo album, while this sounds totally Sodastream.
All the songs were written with Sodastream in mind and as Pete and I have a very established working relationship I can bring ideas to him when they are still in their very early stages. Occasionally we’ll begin with the structure of a song already complete but most often we’ll work on a song together. And while the arrangements are coming together I’ll keep refining the lyrics and vocal melodies.

I also think that by limiting ourselves to acoustic guitar and double bass (or occasionally piano) during the writing stage we ensure that the body of the song is strong enough to stand on it’s own, without anything extra. That way when we do add additional instruments it is building on a firm foundation rather than covering up flaws and inconsistencies.

We have at least two “winks” to European tradition, the Spanish/Latin nuances of “On The Stage” and the Eastern European vibes of “Habits”. Is that, like, casual?
It wasn’t really deliberate but all the sounds from our lives do creep in there. We haven’t spent time in Eastern Europe but we both do love the folk traditions from there as well as in southern Italy and Spain. Habits is part gypsy, part American folk while On the Stage is about travelling so it made sense to have some other sounds on there… Marty’s actually playing a marimba on that one, which in our part of the world is more associated with island music. So it all plays into our idea that if you give songs enough space to breath people can attach their own meanings and histories to them.

What is it that, in your opinion, “makes” such a recognizable Melbourne scene and what is your relationship with the newer generation of bands?
Melbourne has always had a lot of great bands. It’s one of the few places in Australia that has a strong music culture with plenty of live music venues. However, it’s a broad and varied club and our musical peers just make up a small section of the scene. So I wouldn’t say there is a Melbourne sound as such. We just see some like-minded people out there and occasionally we play some shows together.

And as far as the younger bands go, who knows? I like what they’re doing. It’s great to have new ideas out there and old traditions reimagined. Weirdly enough, there are quite a few bands playing in a style that I remember from the nineties but they bring a fresh angle to it. For example The Finks are putting out some great records.  The way they combine the everyday with the poetic is really captivating.

There is, indeed, a close relationship between Sodastream and the Italian audience. You announced the release of the new record in Italian also and you even released a live album of a concert at the Barchessone Vecchio, a pretty peculiar venue in the Po Plain. What do you recall of that concert and why did you decide to record and release it? Can you trace back your relationship with Italy as a band?
Wow. That was a long time ago now. We came to do that album through some new friends we’d made through a tour and it sounded like a fun and exciting project when they suggested it. We were happy to be a part of it. It was a small show out in a converted stable in the countryside, which was a beautiful setting. We’ve always tried to make our live shows something to remember and this was one of those – a great moment that I still think of fondly.

We have always felt a special affinity with Italy ever since we first played in the country. Pete’s mother’s family is from Randazzo in Sicily so there is a strong connection there and the gang from Locusta Booking Agency are like family to us.
I think our first Italian show was in Gorizia in the far north and since then every time we’ve been made to feel very welcome and have made some great friends. We’ve played all over, from Torino and Milano in the north down to Catania and Lecce in the south so we’ve spent a lot of time in the Autogrilles too.

What can we expect from your upcoming live performances? Do you feel you’ve changed since your last tour, in terms of how you play together, or how you feel on stage in general?
We’re very much looking forward to the Italian shows. We’ll be playing plenty of songs from the new album as well as a mix from the back catalogue... and maybe a cover or two. We’ll see. We’re still working out the set. After such a long break, we’ll be coming back with a lot of fresh energy to put into the shows.

In the interview you had previously with us, you can read the frustration of not being able to make music a full time job. Do you feel anything’s changed now from that point of view for younger bands?
We did struggle with that for quite a while. It’s always been difficult to earn enough money to survive when you’re an indie musician. But we could always sell albums at least. I don’t know how kids do it today. You don’t make much from streaming and only a small percentage of people pay for actual LPs or CDs.

I don’t know what it’s like in Italy but in Australia fewer and fewer kids from disadvantaged backgrounds are coming through the scene. The support to get through the years of unpaid performances and practice that’s required to succeed is not there so there’s a much higher percentage of middle and upper class kids getting out there. It’s a real shame because there’s a whole sector of society that we know less and less about. And with ignorance comes fear and judgement. It all adds to the unstable political climate that we’re living in.

How do you cope now in terms of reconciling a day job/a family and your passion? What do you see in Sodastream’s near future?
Life is always a juggling act and although occasionally I wish I could play music full time I’m actually very happy with how things are. Music is a reflection of life and I believe that unless you’re living a life outside of music you won’t have anything real to express. If you retreat too far into the music it becomes more and more insular and less connected to the world.
And of course, at a more practical level if we don’t have to rely on music to put food on the table we can be completely true to the music and ourselves.