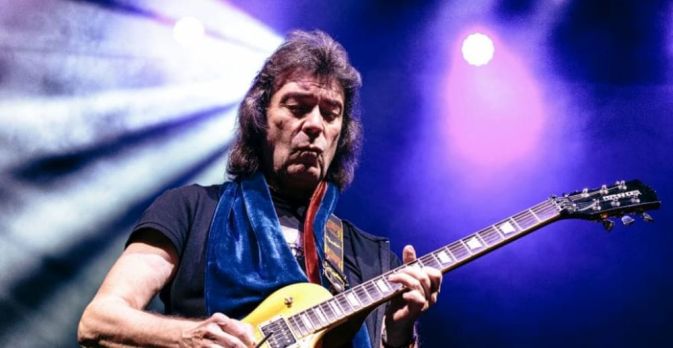 Prog into the world

interview by Claudio Fabretti
Tweet
Hi Steve, let's talk about your next concerts in Italy. I know there will be new songs and old Genesis hits as well. Can you reveal us some information about the setlist?
The show is at least an hour and a half of Genesis Revisted music. We will include big Genesis favourites like "Supper's Ready", "Dancing with Moonlit Knight", "Firth of Fifth" and "Fountain of Salmacis" along with several others. We'll also celebrate "Please Don't Touch" anniversary as part of the solo aspect of the show.

"The Night Siren" (2017) is your latest album. Are there any changes compared to your previous works? And which role does your wife Jo play in the making of the album?
This album is more more global than previous albums, featuring at least twenty artists, instruments and influences from all over the world, including Israel, Palestine, USA, Azerbaijan, Hungary, Iceland, UK, Peru, Iraq, Spain... and the album was recorded in several places... Part of it in Sardinia. The album contains a strong message of peace and world harmony in these troubled times.
Jo wrote some of the lyrics and melody lines. She and I discussed lots of musical ideas which became part of the album.

About your solo works: which is your favourite one or which is the record you feel closer to your idea of music?
My current favourite is "The Night Siren". I feel proud of the breadth of music in it and the multi-cultural aspect.

What do you think about progressive rock of these days? I think it is a genre that can be appreciated even in our times (I think of artists such as Marillion, Porcupine Tree, Steven Wilson etc). How do you think it can be considered as a modern genre, still now?
I think progressive music is timeless. There should always be room for every kind of music. It is a genre with many aspects. Like scenes from a film, it is mercurial and diverse. Many young people today are thrilled to listen to this music as it provides wide dynamics and many elements of dramatic surprise.

Do you still have contact with other Genesis members? According to you, what was the Genesis real secret during your golden years? And what do you think about a band reunion?
Yes I still see the other Genesis guys from time to time. The secret was that the music was well written and each of us brought something different and special to the band. I would be fine about a Genesis reunion but I do not know of any plans for this to happen. In the meantime, I continue to celebrate the classic Genesis magic in my shows.

I love especially "Selling England by the Pound" and the song "Firth of Fifth". Can you tell me how the song was born and the origine of all those musical changes?
It was mainly Tony's song, but once I had played the piano figure on guitar it became distinctive like a bird in flight over the sea. It's a haunting melody and I feel uplifted every time I play it. Each band members coloured in the spaces from Tony's initial piano sketch.

You're a fantastic guitarist, with a unique style. Which are the other guitarists you appreciate more in rock history?
I grew up enjoying Peter Green for his soulful blues work and Jimi Hendrix for his dynamic innovation.

Do you also like some rock bands nowadays? How do you see rock music in the 2000s?
I enjoy Mew and Dave Grohl's work with John Paul Jones in Crooked Buzzards. I also enjoy enjoy Steven Wilson's music. I wish there were more innovative bands around these days. Much music at this time is too predictable.

You still have a good relationship with Italy. How is playing in Italy for you, and what do you like (or dislike) of our country?
It is always a joy to play in Italy to the extraordinarily enthusiastic crowds who really understand this music. Italy is a particularly beautiful country with an amazing history and incredibly warm people.

Some time ago I interviewed Rick Wakeman and he was really satisfied with Brexit. Do you agree with him? How is the life in Uk in this political phase?
I am very unhappy with the idea of Brexit. It is likely to make it more difficult for UK musicians to play in Europe. People in the UK would be poorer if Brexit goes ahead. It also encourages prejudice against people from other countries. I think that music can heal divisions as an ambassador for cultural diversity and world peace.

Beyond The Shrouded Horizon