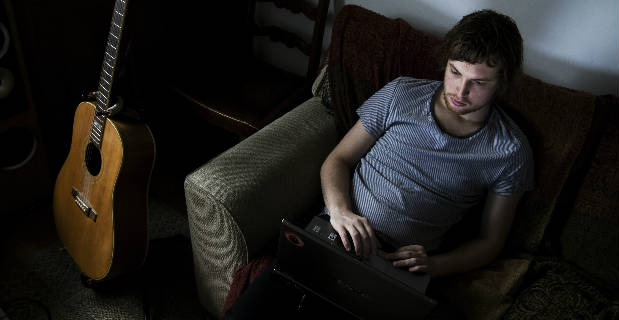 Between earth and sky

interview by Matteo Meda
Tweet
Where does the name Talvihorros come from? And what is it? A project, an alias, the name of your musical soul, every of these...
Talvihorros is the finnish word for hibernation – it was suggested by a friend when I was searching for a suitable name, I found it obscure enough to go with and I like how the word looks regardless of its orginal meaning. The music I make as Talvihorros is free from any restraints, goals or categorisation. I follow whatever path takes my interest.

How has your music changed direction during the years?
Initially Talvihorros was mostly a guitar project, albeit in a very processed form, with each album new sounds and themes have interested me and ive wanted to take every album in a different direction. I've incorporated electronics more and more and I think now have a quite a wide­ranging use of instrumentation and balance between clean sounds and more processed ones sitting side by side, sometimes in harmony and sometimes in disharmony.

What is your instrumentation kit composed by today?
I have a real fondness towards analogue electronics especially synthesisers and guitar pedals. On Eaten Alive the Roland Juno 6, Siel Orchestra and Arturia Minibrute where used quite extensively. And of course my Fender Toronado guitar used across everything I've ever done.

Can you tell us about the process that has brought to “Eaten Alive”?
The album was born after a meeting with Daniel Crossley – owner of the website Fluid Radio in London in 2012. We spent sometime talking mostly about Daniel's life visitng the places where he grew up. Daniel battled with a drug addiction for many years. After this encounter I decided to use his story as the basis for the music on Eaten Alive. I wanted to explore the darker themes of isolation, loss, fear and addiction and also addressing a community that lets people fall through the cracks.

What does this album represent in your artistic path?
With this album I wanted to express myself more through compisition rather than improvisation as I have on nearly all my previous albums. Most Talvihorros records have started as guitar improvisations but here it was the locations and story's Dan told me I took as the starting point and composed more as someone would to a film, attempting to create a sense of place and narrative.

I readed the album has come out for Fluid Audio, a label that releases handmade limited editions. Why have you chosen to have this small print before the great Denovali release?
It was great to have such a bespoke and lovingly put together CD release that Fluid (and Daniel himself) made – it also gave him an opportunity to visually present the album and a photographic book of areas of London that meant something to Daniel. I was lucky enough that Denovali were into the idea of releasing the album in larger numbers and also on vinyl when they heard it. I was pleased to get a vinyl release for it as in the final stages I very much had that format in mind.

And what about Denovali, the label that launched you as a “big” name?
They have been great at releasing music to a very high standard – with particular attention to detail and artwork. They really care about the physical product and in particular vinyl which is something I fully support.

The impression I got from the album is that you tried to have a more organic approach than in your previous release... Do you agree?
Well I think I wanted an album of contradictions so something that was very electronic, urban and almost alien­like and contrast that with a really warm, organic and human level. I wanted these two seperate ingredients to fight for the same space in some ways mirroring life.

The heavy use of guitar also probably put your music definitively outside the “kosmische” box, in which it has been put until today by many critics... What do you think about this definition?
I'm not really sure how best to categorise my music ­ I get everything from electronica to post­ rock, drone and ambient. If I'm honest its not up to me to put my music in a box so i dont try. I generally like a lot of kosmische music so don't mind the term being used for my own music – even though I dont really agree that what im doing is related to kosmische.

In order to try to define in a more precise way your artistic border, can you tell us who are the artist who influenced more you and/or your music?
It's tough doing this as its changed lots over the years and throughout my life ive consumed so much different music – i think its more a melting point of all these things. Genereally now when im working on an album i dont listen to very much music from other people at all. Except maybe some old folk music when im relaxing.

Is there any non-­musical element who influence your composing process?
Definitely film, art, the environment and the people around me.

I recently discovered you were active also in a band/act called Lesser Panda... I didn't know anything about that! What genre of experience has it been?
I was in Lesser Panda in my younger days – ive always performed in bands since my teenage years and continue to do so now. Performing with a band called Inca Gold and adding parts to the new Graveyard Tapes record. Writing with other people can be a nice escape from worlking alone which can be very challenging sometimes. With friends it can be more about having fun than an end goal.

How do you usually build up your live shows?
I've always performed primarily with guitar through pedals in more of an improvisational manner after many years of doing this it started to become more structured and more electronic with the introduction of synthesisers. Lately ive introduced a laptop for the first time which has opened up a whole new world of possibilites.

And are you going to bring “Eaten Alive” on stage?
Yes – at the moment im working with a laptop, analog synthesiser and bunch of guitar pedals and loopers to translate the material to a live setting.

In the end, what is your favourite Talvihorros album?
It's hard to pick a favourite as they all represent a different part of my life over the years. I guess I'm most proud of the 'Eaten Alive' as it my most realised work to date i think. Although i dont really like to look back and have started work on the next Talvihorros already which im hoping will be better.