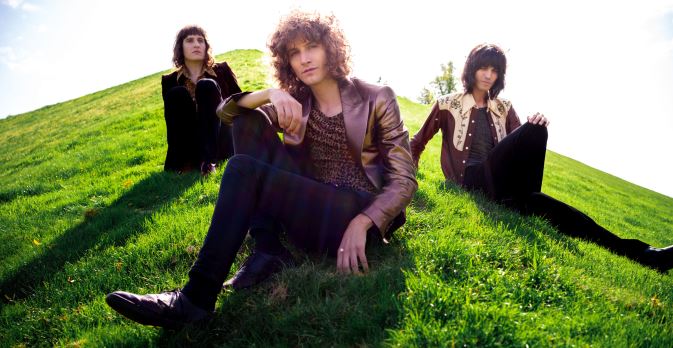 interview by Stefano Bartolotta, Guia Cortassa e Stefano Macchi
Tweet
We called Adam Smith on the phone, to talk about the release of the band's third album, "Hot Motion". Adam opened up on some behind the scene things, which give us a more complete vision of the band's path.

It took you less time to release this album from when you finished the second one than to release the second album from when you released the first one. This is quite unusual, so I would like you to tell me something about this.
We toured the first album for almost two years, so I think it has to do a lot with it. We don’t really write when we’re on the road, and we didn’t tour “Volcano” as much as we toured “Sun Structures”. Since we got back from touring “Volcano”, we got straight at it, we worked separately and wrote songs, then we came together. I also think we were more focused this time around, we had more perspectives from having two albums and knew where we wanted to go.

Since you hinted at the writing process, I’d like to ask you how does it work and if it changed from the previous album until now.
I would say that now it’s being more collaborative than how it has been in the past. We still start by writing separately, we don’t sit in a room together and come up with the song as a group. Everyone brings their own ideas, whether it’s a fully formed idea or just a skeleton of an idea, then we sit down and write parts for this idea, or change parts, and build up from there in the studio. It’s similar than in the past, but, as I said, it’s more collaborative now when we build the songs up and change structures.

When we interviewed your band for the first album, you said that you recorded the music by yourself, and then hired an external person to mix it. I’d like to know it the same happened for this album.
It’s exactly the same. I think the way we write, record and produce means that we do all these things almost at the same time, so for example the sound is taken into consideration by the time we are recording the song, so there’s no need of a producer. James is at the helm of the mixing desk, but we also sit down and decide things together, and it was the same with “Volcano” and “Sun Structures”, we recorded and produced “Sun Structures” in James’ Mun and Dad stair room, then we did the same with “Volcano” in James’ lounge in a different town, and this time we did it in a little village in James’ studio, which is converted from his garage.

I think rhythm in this album is different than in the previous ones. The sound of the drums is louder and has more relevance in the structures of the songs. Do you agree?
I think you’re right, especially in a couple of the new songs. The drums are a bit more aggressive in this album and we were more conscious on how to use them, and on how to let them drive the sound. Also, some songs are faster than how they were originally conceived, or at least they feel faster, and this is different than in the previous two albums.

I always thought that your band is influenced by some past music, but at the same time, you want to sound as modern as you can.
Yes, we’re definitely inspired by music of the past, but it’s not necessarily Sixties or Seventies music. We enjoy some stuff from the Fifties, and some good stuff from the Eighties and Nineties. I think it’s not conscious to not want to sound like a retro band, it all comes quite naturally.

Talking about specific bands that might have inspired you for this album, I can hear some T-Rex, I don’t know if you agree.
There’s probably a bit of T-Rex, but in general there’s definitely some of the stompy glam of the Seventies, I wouldn’t say T-Rex specifically but yes, we listened to a lot of glam while making this album.

My favourite song of the album is “It’s All Coming Out”, so I would like to tell me anything you want about it.
Oh, thank you. It was written on a keyboard and made with seven chords, then it was OK for the rest of the band and we started working on it, changed a bit of the structure, and lyrically it’s a bit of a secret, and if you don’t mind I’d like to keep it a secret.

“Hot Motion” tour is coming to Italy too, and I think these will be your first headlining shows in Italy ever, so a lot of Italian people will have the chance to see you for the first time. What should they expect?
Yes, I think the last time we played in Italy it was with Telegram, The Horrors and The Dandy Warhols, it was a sort of package festival. We never played a club show in Italy, so we’re pretty excited. About what to expect, recently the crowds were really reacting to the new songs, we had moshpits and people went wild, it was great. We’ll play a lot of songs from the new album, a few from “Volcanoes” and quite a few from “Sun Structures”. There’s a lot more energy on stage than in the studio.