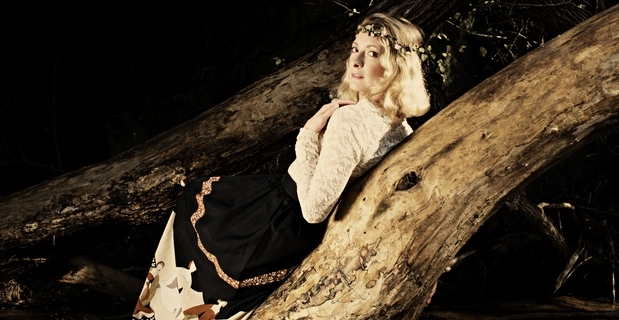 interview by Stefano Bartolotta
Tweet
Three months after the release of her second album "Soul Whisperer", we release the questions we sent to Tess Amodeo-Vickery via email, and her answers. They explain all the ideas of the US artist based in Rome and all the reason for her choices, music and life related.

Did you leave New York and move to Rome because Rome was the best place to find inspiration for your music, or because you had the opportunity to work with people you like or for some other professional reason?
I left New York because I felt like there was something more to life than competition. I wanted to live inspiration and collaboration! I hate being a number, so I came to a place where I could differentiate myself and stand out from the crowd. I also really wanted to learn Italian, as I think it's the most beautiful language in the world.

This is your second album, and I guess there will be people (myself included) that will listen to it before your first one. So, what should we expect from “The Rough Soul” now that we know “Soul Whisperer?"

The title "The Rough Soul" says it all: it's a rough, raw, home-cooked album recorded in my father's studio and mixed in a country lab in NH (the state where I was born). The title came from a button I found on the train tracks outside of Termini. I thought it was perfect for the album because all the songs are about healing. As a wound heals, it forms a rough, textured scab to protect the new skin underneath: this is what my heart was going through as I wrote the songs on my first album. "The Rough Soul" was about the healing process, but not quite fixed yet. I love it and hope to release it to my fans at some point, as I've kept it sort of a secret.

The sound on this album seems quite simple at first glance, but there is actually a good number of instruments involved. How does the sound building process work? Did you work in a different way from the past?
That's what we were going for! My producer, Agostino Maria Ticino ([de]composer studio), usually works with electronic music, so he tends to look for one note that can create a world of sounds. For my album, we applied that theory to recording acoustic instruments. In the post-production, he did a lot to clean up and minimize the layers we had created to give it that fresh, clean folk sound I wanted, but with the ambiance of very deep and spatial tracks.

I feel that the main goal of your songs is to make the listener get the emotional impact first. Have your ever had to re-work or dismiss a song because it was over-produced and this impact was somehow hidden?
Ha! Yes, many times, much to my producer's dismay. A famous example of my "paring down" was on the track "I Try", which was actually cut from the final album because we wanted to keep it to 12 songs (I'll release it later). Agostino had done this really romantic, film noir-esque arrangement with a Chet Baker-style muted trumpet, but I just couldn't get into it. It was beautiful, but the true meaning of the song - trying to fit in somehow and losing your light - was completely masked by too much excess. The last night I was in Le Marche recording the vocal tracks, I made him stop the other song we were working on at 2:00 AM and record me playing "I Try" live on a cheap plastic guitar from Tiger that was lying around the house we were working in. The result was magical and everyone who has heard it loves the haunting melancholy of the empty room and strange guitar. Agostino still insists he's going to release his version as a remix :)

I particularly like a sentence on the press release: “this album is modern and retro at the same time”, I completely agree and it’s not easy to find a record with this strength. I simply ask you to tell me everything you want about this aspect.
Wow, thank you! What a nice compliment and I'm so glad that you could hear what we were going for. First of all, it's modern because we did all electronic and computer-based recording, working with an electronic music producer and some electronic instruments like keyboards, electric bass and synth. But the core is retro, starting from the principal instrumentation - string instruments from the 1800's - and the really natural feel I wanted to give the album by recording in country houses across Italy, rather than in a cold, perfect studio. The lyrics have the sentiment of peace music from the 1960's and 70's, but are applied to situations contemporary to my life, while the melodies are a combination of sweeping musical theater-inspired passages and My Brightest Diamond-like arrangements. As someone who studied history, I think it's important to use the past to influence a more-informed present. If you look at fashion, for example, new styles are always pulling from old models, and I think that formula for success applies to music as well.

I've written about music since 2005 and I am usually able to use a lot of words to describe what I’m listening to, but sometimes it’s hard, specifically when the music feels so honest and self-evident. I truly feel that sometimes the best way to describe music is “go listen to it”, and your album is one of these few cases for me. Do you also feel like “everything is in the songs and it’s so clear, what more should I say?”?
Thank you, that means so much to me. I like to think that "Soul Whisperer" accomplishes exactly what its title promises: an intimate conversation with the listener's soul. Music is the thing that helps me battle my darkest and scariest moments and fills my life with hope, and I think music in general helps a lot of people in this way. I had friends in New York tell me "This is too honest! It's too vulnerable, I don't understand it," but I wanted to really touch people, so I had to be real. I accept the criticism with the praise (one critic said it was like "homemade sweets"), because I think the people who need to hear this album will receive it the way it's meant to be heard in the end.

How are your live shows? Do you perform alone, or with other musicians, or both depending on the occasion?
On May 12 at the Chiesa Metodista in Rome, we did an incredible, interactive show with 7 musicians (violin, viola, cello, bass/electric bass, 3 guitars & drums) and live painting by my street artist friend Ryan Spring Dooley (www.ryanspringdooley.com) to give the audience a 360 degree artistic and musical experience (like in the Renaissance). I also play solo or with Trio Improvviso (violin, viola & cello) and just yesterday I performed at the Città della Altra Economia in Rome with Francesco De Palma on electric bass and Ambra Chiara Michelangeli on viola (1/3 of Trio Improvviso), which turned out really great. Sometimes I duet with Andrea Filippucci, my brilliant second guitarist. My live show is fun because it's always changing depending on the situation, and all the musicians really breathe this music, as they all composed and played their parts on the album.

Did you already start collecting ideas for the future, or do you usually keep focused on what you just released and on playing it live, and you work on new stuff only later?
I'm always creating and imagining the next project in a very loose and free way. My iPhone is filled with melodies and sketches for future songs. I have two songs ("I Try" and "Anais Nin") that were cut from the album, which I'd still like to release. I really liked working with my voice and doing a cappella recording on "What Is the Journey", so that's something I'd like to work more with in the future, and I think it will help me work more quickly, as I tend to direct my band vocally due to my lack of formal musical training. Whatever I do next, I can tell you that it will be an honest part of my journey, like "Soul Whisperer" and "The Rough Soul". And will probably have to include "soul" in the title somewhere :)