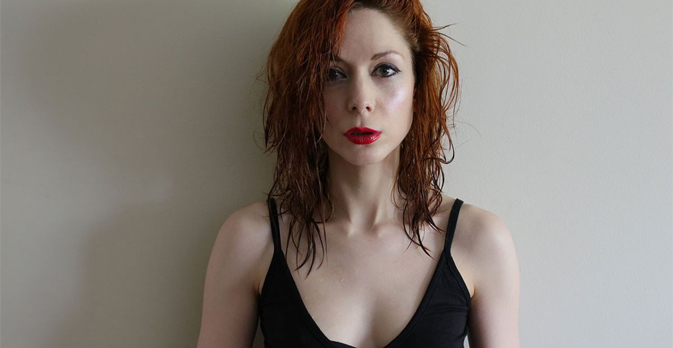 What are the thoughts and the reflections about releasing a record ("The Art Of Losing" was released in March 2021) in the Covid-19-Era: is there is a “right” time to release a record in this situation?
It’s strange because the album was finished in 2019 and I was very nervous about how it would be received because some of the themes were so dark and uncomfortable. I could not have anticipated how by the time it came to be released (it was delayed by a year) that we would all have been forced to confront our own mortality, living in the midst of a worldwide pandemic. So, in a way, it was absolutely the “right” time to release an album that dives into anatomizing death and grief. It seems to have really resonated with people in a way that I could not have expected at the time I was writing it. It was very serendipitous.

What is the moment of "The Art Of Losing" that you are most proud of?Having written and produced the album alone is probably the thing I am most proud of in terms of the record as a whole. It really is a bit of a case of me setting out my stall in terms of what I can do with modern production and arrangement. I am usually such a self critical person and rarely happy with anything I create but I can honestly say that I think there is only one tiny thing that I would change on the whole album. I feel so proud of it. It’s not so much one song, or one moment but more the cumulative effort of the whole project as a statement I just feel completely happy with. And I couldn’t have asked for it to have been received better in terms of reviews and radio etc.

Can you tell us about the podcast of the same name that anticipated the release of the album?
The podcast was very much a cathartic process and companion to the album in terms of it helping me to work through so many of the experiences and losses I had had in my own personal life during the making of the album. I was able to talk with and learn from so many wise and insightful people who were so much further down the grief road than I was and learn from their own journeys. It’s something of a companion project to the album for those that want to dive deeper into the themes and conversations about how we make art from or in the midst of loss. I spoke to David Bowie's producer Mario McNulty about making the “lost” Bowie album, as well as Patrick Jones about the poetry of grief, Sophie Daniels about baby loss, and Kat Lister about young widowhood.

Among the messages you received after the publication of "The Art Of Losing", is there one that particularly impressed you?
I think the general response to ‘5am’ online was the biggest impact in terms of realising how much the album was resonating with people. I had been quite scared about sharing the song which documents sexual assault - I’m usually a very private person - but I came to realise in the moment that I had released it that it wasn’t just about my story, it was a shared story that so many people have experienced. That felt like the most important moment after release that impressed itself upon me the most: all these people sharing their own stories with me, both publicly and privately.

Your lyrics are often autobiographical. What is the key to being able to channel your feelings and especially painful experiences into words and music?
I’m not sure I know the key to it beyond just allowing yourself to be authentic and channel your experience into the songwriting process. I write down a lot of phrases and thoughts as they come to me and I try not to focus too much on the idea of anyone hearing the song when it is finished but more on the transaction of trying to make the track an accurate record (quite literally) of the moment or feeling in question. That is all we can do as songwriters - translate the pain.

Experience the pain and let it do its job to drain its energy, like you sing in "Let It Hurt". Is this experience really possible for everyone?
I’m not sure if it’s something everyone can or wants to allow but for me it was a mantra about how I needed to not avoid confronting my pain and loss. I had been touring and travelling a lot during this period of time and there was a huge part of me that had put “on ice” so much of my feelings and the complex process of coming to terms with what had happened in my life. This song was a message to myself to be brave and confront it all head on. At the end of the day, allowing yourself to be vulnerable can sometimes be the most courageous act. Confront the difficulty and do the work to understand what has happened in your life. So many people turn to alcohol or drugs to numb the pain. That’s not for me: better to confront it head on.

The song "5am" struck me for the gravity of the traumatic situations described with an unprecedented, almost peaceful tone.
Thank you. I wanted to quite undramatically present these occurrences that are so common in many women’s lives in a way that avoided the usual histrionics that often accompany their depiction on screen or in words. It felt more powerful to let the words carry the gravity and not have the music compete for attention. I wanted it to be unassuming and creep up on the listener. It’s the collision of the gentle piano and the brutality of the words that I wanted to create the impact.

One of the many virtues of "The Art Of Losing" is the variety of musical genres. In your compositions are the lyrics or the music to be born first?
I usually find myself composing the music first. I am inspired by a huge variety of music - from neo-classical to heavy rock so it’s natural that this will make itself known in the way that I wrote. I often get labelled with “art rock” or “baroque pop” which I guess tries to make sense of the way I meld together these different styles. I don’t censor myself if I want to write a heavy rock song like "My Confessor" and then have a Max Richter style piano interlude next to each other.

I find a certain affinity in your method of describing pain and difficulties with Martin Gore, who has always reiterated its cathartic effect. Do you feel this too?
Thank you! I am a huge Depeche Mode fan and I think Martin Gore is an incredible songwriter. The band was a huge influence on this new album. I wanted to look to the way he is able to combine dark subject matter with upbeat, almost anthemic and joyful music as a template for the way in which I wanted to approach the singles on "The Art of Losing".

As a refined multi-instrumentalist, is there a particular instrument that you use to translate your thoughts into music? Can you also tell us about your passion for analogue music and vintage instruments?
I tend to write on either the piano or the guitar as my go-to writing instruments for the main outline of a song, although quite a few of the tracks on this new album were composed on the OB-6 synthesizer straight into Pro Tools, which has been an evolution of process for me. While I was playing with Simple Minds between 2014-18 I of course became deeply interested in analogue and vintage synthesisers as I learnt and unpicked their back catalogue to play live on stage. This naturally influenced the instruments I was collecting for my studio and the ways in which I was writing new songs for "The Art of Losing".

Of the many collaborations of recent years, which artist has enriched you the most and for what reason? Who would you like to collaborate with in the future?
It’s hard to pick one experience over them all as I have learnt so many different things from everyone that I’ve collaborated with. In terms of what probably enriched "The Art of Losing" the most was my collaborations with the Manic Street Preachers - in particular James Dean Bradfield and the clear sense I got from him about how his songwriting craft is very much a result of consistent work ethic and revising and redrafting. I really applied this method to the making of the whole album. For instance, there was a point when “Unravel” really wasn’t working and I considered dropping it from the album but I kept in mind what James had told me about writing 30 and more versions of their song “Faster” and just kept reworking the arrangement and unpicking the song until it all finally fell into place at the last minute.

In terms of future collaborations, I would love to work with Kate Bush in the studio. I really do think she’s a production genius. I love her sense of playfulness.

The Art Of Losing

Confessions Of A Romance Novelist