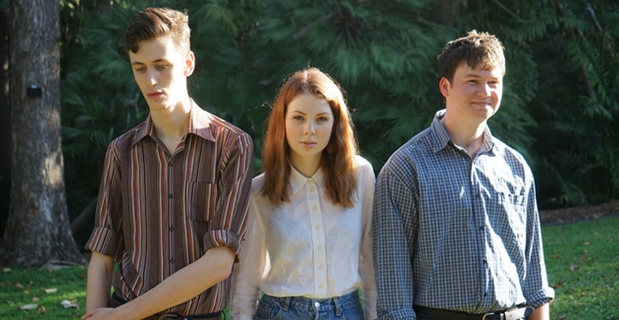 It's not so much because of the geographical distance from Lombardy to Brisbane, than because of the age "distance" separating us, that we ask ourselves, while writing the questions for this interview, whether they really make sense. Maybe some don't, but Louis doesn't show too much, and barely conceals his excitement for everything that's happening around The Goon Sax.

So the first thing you remember is that you were 17, and now you have a review on Pitchfork and NME and you’re planning an European tour and a move to Berlin. What goes on in your mind at the moment?
[laughs] Well at the moment I am really just trying to focus on finishing school so we can do more touring and have more time to work on music. So that's very much a goal on my mind I think.

I have read that you are fans of Galaxie 500 (Louis especially), and you can hear that in your songs (I am, too, very much). In this respect, I couldn’t help but noticing the similarity between the two bands formation, as Riley, your drummer, joined the band after one month of drum lessons, much like Naomi Yang in Galaxie 500 (playing bass). As an afterthought, do you think this is important for your music?
I love Naomi's bass playing, she might be my favourite bass player ever! I remember when Riley joined the band James and I were relieved she had only been playing for a month because it meant her drum parts were very simple and the focus remained very much on the lyrics and melodies. I remember at our first practice we told Riley if she hit the snare drum every now and then that would be great, so we were  very excited when she started playing beats, it completely exceeded our expectations. I don't think we were thinking particularly of Naomi when she joined the band, but it was definitely an appreciation for people like that which made us see being an amateur as an advantage rather than an issue.

On Chapter Music’s website they describe you as “three songwriters”. So I’m curious, how do you create and arrange the songs? It’s like anybody arrives at rehearsal room with an idea and you develope it all together, or something else?
We all write very separately, usually one of us will bring a fully finished song to the practice room and then we all just kind of work on our parts together. We have tried to just "jam" at practice and see what happens but it doesn't really work for us.

I think the lyrics of the album are most of all about growing up nowadays (tell me if I’m wrong) and two songs in the tracklist have a name as a title ("Susan", "Maggie"…). Is there a link between the songs and the stories they tell? If so, what is it?
Yeah, the lyrics weren't intended to be about growing up but I guess they are because it's what we were doing around the time of writing them so that reflects. In terms of Maggie and Susan the two aren't really linked. I have always liked songs with names, The Monkees have "Valerie" and "Mary" and that's something I have always liked. I remember reading that their writers were told to give the songs common girls names so everyone with that name would buy the single, that idea really appealed to me.

I sometimes wonder how Australian indie-pop can still sound the same after, like, 30 years – I’m looking for instance at your labelmates, Twerps, Dick Diver. Much more so than indie-pop bands in Europe, or the Usa. Do you have a clue?
I don't think it sounds too much the same, one of the things I love about these Australian bands is that I think this certain sound has been explored and changed a lot without losing a very distinctive element which I guess is a bit of a common thread with those sorts of bands. Bands like Cannanes or the Apartments definitely have an influence on a lot of younger bands. I think Twerps and Dick Diver are exemplary of how far you can take  that sound and keep reshaping, making it sound really fresh.

And what about the contemporary Australian scene? I know you’ve toured with Blank Realm, for example. Which are your favourite ones?
There are a lot of great bands in Australia at the moment and some good labels too. Blank Realm are definitely a favourite. Lower Plenty, the mosaics, totally mild, Dick Diver and No Zu are great as well. It's good having so many great bands it means there are always people to see and play with. Somehow it also feels exciting when you listen to a great band and they live in the same city as you, I sometimes think about how I was probably only a few kilometres away from that band when they wrote the song I am listening too, it's nice.

You recently posted a Spotify playlist with the songs that inspired you for “Up To Anything”. I noticed one big absence from it, which would be The Bats. I thought they might be a milestone for any indie-pop band in your area, aren’t they?
No they definitely are, there were quite a lot of bands we left off the playlist actually, it probably could have gotten close to 10 hours if we had included everything. The Bats are great!

Being a big Go-Betweens fan, I have to ask you, what does Louis’s father thinks about the album and the band in general?
He seems to like it. I guess I have never asked.

Would you consider adding some Italian dates to your European tour plan?
We would love to come to Italy! It's just tough because we only have like two weeks to tour seeing as it's in my school holidays. When we move to Berlin and can your Europe more easily we will definitely come to Italy all the time! I think James particularly has been saying that he really wants to go.