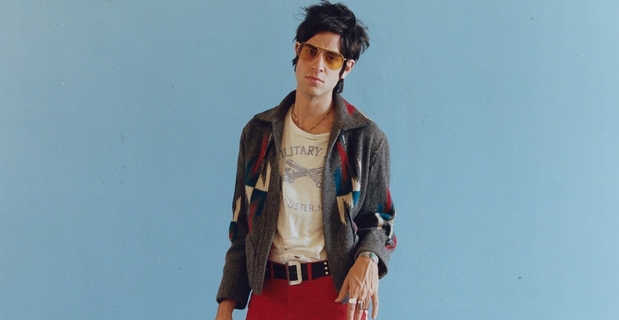 Darling buds of May

At only 25, Thomas Cohen’s life already closely resembles that of an experienced, old-time singer-songwriter: a flash career as the frontman of a band surfing the hype at the end of the Noughties, and a personal story that sees him tangled with love, drugs and paparazzi with a tragic ending. A history of love and death that the young Londoner tells in his debut album “Bloom Forever”, upcoming for Stolen Recordings, with his wish to keep it in the shadow of his music.
We meet in Milan, sitting at a small table outside one of the most crowded bars in town, during happy hour.

You are in Milan for a fashion shooting, so I’d like to start from that, the relationship you have with your image. Is modeling something you often do or is it you first time?
It’s not my first time, it’s kind of like a weird no man’s land when you’re a musician, in that like you’re certainly not a model but you end up doing these things in the fashion world, which sometimes it’s ok, other times it’s a bit loathsome, it’s up to you the right thing to choose...But modeling is not something I ever wanted to do, really. I like clothes a lot, but in terms of fashion and that side of things it just felt slightly uncomfortable I guess.

You have a strong sense of style, your image is quite distinguishable. How important is that for you? I mean, it’s something that defines you or it’s something you just like…
It’s a bit of a subconscious thing, it’s certainly not something I trouble myself with and it’s not like an effort, I don’t feel like it would be any more important to me than it is to the next person, but it’s something which I enjoy.

Ok, let’s talk about “Bloom Forever.” When I knew the tracklist was ordered chronologically, the first thing that came to my mind was Richard Linklater’s movie “Boyhood,” which portraits the growth of a kid into an adult man. Was that something you tried to achieve as well?
I didn’t like that film. Absolutely everybody else I know loved it, like, my parents never go to the cinema, my dad saw that film and was like “Oh, you have to go and see it, I loved it, it reminded me so much of you!” But then I didn’t like it. I guess chronologically makes it slightly more cinematic and if you want to, you can probably listen and follow some story. So, in that, yes, but in terms of a direct reference to the movie, no.

No, I didn’t mean a direct reference, but that of the portrait of a growth showing through the tracks.
Yes, I think so… just thinking about whether there’s growth… yes, there definitely is.

Yes, I really think so.
Writing an album with the themes you approached is not unlikely for a singer/songwriter, like the ones you mentioned as a reference. Sometimes that sort of help is a therapy to elaborate everything. Was that your case?
Yes, definitely. And I think that’s something which is slightly lost maybe with non-solo musicians. Writing music on your own really allows you to delve into those places where perhaps you wouldn’t if you’re in a group situation, because a group is social.

How do you write your songs?
I wrote 7 on guitar, one on piano, one in a dream.

You stated in your PR that you would hate if someone listened to your record and simply thought of you. I don’t know if I agree with this remark because if I think of one of the artists you named as a reference, Van Morrison, “Astral Weeks” is basically him putting his life in a record. Why wouldn’t you...
I’d say I wouldn’t want that because say like “Astral Weeks”, I cherish my relationship I have with that record, rather than necessarily Van Morrison’s life in 1968. And I think that what I’ve meant with that is more about the perception of me rather than actually what I’m singing about, or what the lyrics are, or what the words and what the music is. It’s pretty unavoidable if you’re seriously listening to music  not to respond to it for your own thoughts and things. I just didn’t want people to get ahold of that perception first.

I’ve asked you this because living outside the UK, before getting prepared to this interview I didn’t actually have the perception of the amount of tabloid press that’s been hunting  and following you every day. Is it maybe that hunting you, the fear of this overshadowing your music or something?
I don’t have any fear. It’s not like a fearful feeling that, not wanting somebody to just think about that perception. And what’s so lovely about that, because that doesn’t exists here, I can’t wait to tour Europe, to play shows in Europe, because there it’s much purer. I’m really kind of loving that.

In opposition to this overload, you don’t have a massive online presence yourself. You don’t have a website, even your music is difficult to find googling. Is it a reaction? Or is it something you don’t care about?
No, it’s just because I’m a new artist, you know! Hopefully that will change. By saying I’m a new artist I mean I have two songs out, record is not out yet. With the record out it’s going to be different. It’s not intentional. Anything musical I want to be able to have an access [to].

You moved to Iceland for a while while working on the album. Why Iceland?
The producer was Icelandic, musician I had playing on the record were Icelandic, we were working in London, and it worked out about 65€ more expensive per day [not] to do it in Iceland, so it was kind of a no-brainer! And the studio would be residential. I had actually never been in Reykjavik before, but it’s pretty much [as big as this street], that’s done of it. And if you go to the side street you have maybe a cafe and a church, that’s it! And then you’re surrounded by the ocean, the mountains, if you’re there every other month of the year it snows, so I just assumed it was the perfect place.

Because, you know, thinking about the album one could ask why not Laurel Canyon or Nashville?
I would have loved to. But half of Iceland is absolutely American soil, trust in me. When you land at the airport and you drive to Reykjavik, it looks like malls were colonised by some Southern states of America, it’s so crazy. I would have loved to have done it there, but Iceland was good. Next time!

You chose a full sound for this album. Many times such an intimate record would have been just voice and guitar, or voice and piano. How did you feel having other musicians working on these so personal songs of yours?
I worked with about three other musicians, one of them being a drummer, so there weren’t that many people, and I guess I kind of trusted them because they were just improvising and then responding to the few things I’d play of the lyrics or the music, and it was actually something that made the record much better. But I think it was a kind of a blind faith that I enabled them to play something the way that they did. So it felt good, I felt happy about it. And it’s something which I want to keep doing and find other musicians who I love.

You already played “Bloom Forever” live a couple of times. How was it? How did you feel presenting it live?
Great! Really good! That was something I thought about for a long time… I guess I thought about for so long that at some point it sort of felt quite surreal but I don’t feel that, like, present when I’m playing a show, it’s just happening and it’s the best feeling ever, I guess it must be what it feels like to be a professional snowboarder, and snowboarding, you know, you’re just kind of sliding down on a mountain stuck to something.

So you had no emotional peaks?
No, no, I did, absolutely, I absolutely did, I wasn’t like emotionless but in the sense that I don’t think mentally I was present, but, emotionally, yes…

Because, you know, it happened to me once, as a writer, I did write a very personal essay on something that happened to my family, never ever thinking of reading it out loud in public, and when it happened I just couldn’t reach the end…
Because you found it hard?

Yes…
I didn’t find it hard.

No?
No, I didn’t find it hard. It’s not that it was joyful, but I think it’s different, it’s more the transformation of something very sad, rather than just the dictation of it. I definitely felt sad at points but it wasn’t the only one feeling.

Let’s go back for a second to your image and talk about “Bloom Forever”’s video. The way you present yourself in the video is quite awkward, I’d say. While many songwriters try to hide their true selves and feelings in layers of sounds and arrangements in their songs, which you didn’t do, it seems like you did it instead in the video. Did you?
...ish. Is it that different from me?

Yes, it is! You’re way more confident!
Yeah, that’s true. I think probably that’s just a kind of like the representation of it. It’s kind of like a thin veil of humour, which is so difficult to achieve I realised, like “was it meant to be funny or is it...” “no, I don’t really know” and there is a big part of my personality that is like that, and it has shown through in the video. We did want it to be like that, and a lot of my favourite performers kind of are a little bit like that and I think that music here is maybe a little bit like that as well. Not lyrically but music it and “I should actually do this? I don’t know, going to do it anyway”. But then again it’s a one shot that video, so most musicians would go along and be like “that’s bad, let’s go give this real air of cool in,” which is nonsense.

Yes.
Absolutely, and it’s like a protection, isn’t it?

Yes, a filter.
Exactly, and people get paid to go onstage and do it.

One last question: you mentioned many artists from the ‘60s and the ‘70s as your inspirations, but what are you listening to at the moment?
I am actually listening to the new Iggy Pop record, I think it’s really good, I’m a really big fan of his first 2 solo albums and I can kind of see that in that record as well, which is amazing. Then, let’s have a look [takes his iPhone]... I am listening to: the Rolling Stones, Judee Sill, the Small Faces, Tom Waits, earlier I listened to Elton John…

Anyone under 70 in your playlist?
Fat White Family! Under 70… no! Mainly under 70 or dead!