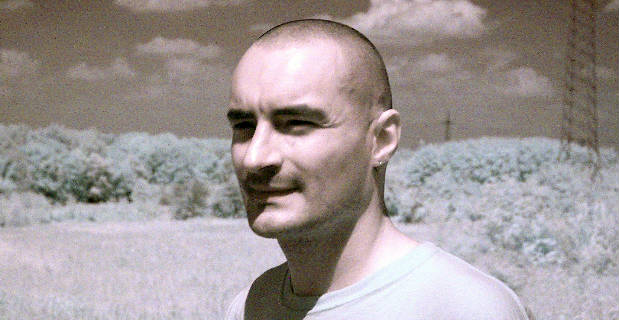 The sound of contemplation

interview by Matteo Meda
Tweet
This new album is, in my opinion, one of your best effort to date. I know you started working on it after have readed some of Fridtjof Nansen's diaries. How did it influence you in composing this long piece?
In fact I did not only read some, but all of Nansen’s publications, but these studies took place long ago. I dont have the books anymore because they were so old and heavy, so all I have left are my notebooks where I copied passages from Nansen’s writings. “Love is life’s snow” – this is the title of one of these notes, and the respective passage became the theme of "Tiento De Las Nieves", and also part of the cover art of the album.

Why did you decide to let electronics aside and concentrate on piano and organic sounds?
There is a sense of simplicity, of longing, of space and this instrumentation works best for this.

The album itself seems to be a musical description of that charming landscape. Did you try to isolate music and remove any human feeling from it (maybe in order to reach a purer contemplation, as if it was a photography), or did you give a role to your emotions – as if it was a paint?
Ideally it would be both – to be able to observe and witness and be yourself (that means the complexity of your memories and situations) in the same moment. My music has most of all spatial qualities that became part of my musical language: distance, horizon, degrees of visibility, disappearance.

The result get really close to Harold Budd's first form of pure-contemplating piano ambient compositions. Do you think this new face of your art had a stronger relationship with that kind of ambient music?
A composer doesn't think in a vacuum, and all ideas are conditioned by what is or is not known in the time when he lives. I would say that may relationship to what Morton Feldman did in the genre of piano music is stronger. Harold Budd has too many notes in too short timeframes for my taste. But he sounds much nicer than Feldman!

Did you use other instruments too?
I would say the most important instrument on this album is not the piano, but the miking that we did (the positioning of the microphones). I used some tricks from the live-electronic toolbox, envelope follower for example, to create the elements that sound like synthesised.

The art of setting landscapes into music is something not so new in your career. Are you developing a precise path based on it or it's only one of your favourite way to evolve your soundscapes?
What is most important is precise observation. Of course, “landscape” has two sides: in whatever landscape you find yourself physically, you also stand inside your mental space. First, I need precise observation to notice the elements that are prevalent, and how they change and in what way. And this has two sides, the observer and the observed come together.

In the previous “Novaya Zemlya”, you gave an important lesson about life-absence in music. Again, you took inspiration from a real place with its own – someway terrible – history. Did you conceive the album as your soundtrack for that place or again as a musical photography of it?
Yes, both. And also a third element, which is about the desire for sites (the title means "New Land" in russian) that you can not reach.

Do you think that sound research's results could be still considered as music, in the strict sense of the term?
Yes i do. But music does not really exist. It is a social practice determined by social structures. And these structures are themselves governed... This is why even at this point 2014 we still (are forced to) make the distinction between a refrigerator noise and a violin noise.

How did you obtain the sounds you used? It was purely field recording's sampling or you generated and treathed them via laptop?
It is a combined approach. I think the toolset is less important than the purity of the vision.

These last, very different albums came out for two incredible and very different labels: Touch and Denovali. What can you say about your experience with them?
Their contribution to music is really precious. I am very honoured to be able to contribute.

And instead, why did you left Mille Plateaux, with which you seem to had a really strong professional relationship?
Mille Plateaux left us. It died because of financial desaster. Real shame.

You also shared with Mille Plateaux some of the best moment from your past; or better, some of my favourite ones, such as “Kaamos” and “Daikan”. I must also give them the merit to have introduced me to your early stuff: and when I listen to “Teimo” nowadays, I alwas think how wonderful it remains, 24 years after its first issue. What's your relationship with your artistic past? What albums from your discography do you still consider as your best/ favourites?
Strangely, to me the early works dont seem early at all. I would do it now in the same way again!

Do you give much important to the visual element in your live performances too?
Yes, I do. For many of my works I design special visuals for the live shows. It made me create a alter ego as a video artist. I am really interested in the relation of image and sound. But in the same way I know that no such relation exists – 2 separate senses are adressed that function independently – does not make it easier.

More in general, do you think your music suites well with live dimension's dynamics?
Ideally all my concerts would be an encounter, a meeting of the verticality of time and the given moment, with the lateral flow of sound in the spatial situation of a indoor/outdoor venue, shaped by the resonance of a very specific unique audience. I dont know if i can ever reach it in this ideal way, but the live dimension is absolutely essential.

How do you usually built up your live sets? Do you just improvise with samples and loops or do you also cut down some parts from your albums?
In an ideal situation i could develop a completely improvised set. In not so ideal situations it has to be a gradual approach, making diversions from existing compositions, leaving paths, trying to get somewhere where I haven’t been before.

Are you going to bring “Tiento De Las Nieves” on stage? And will you have a pianist playing on stage with you?
Yes, we will bring it on stage along with the (shorter) pieces of the Vol.2 of the piano music that will be published next year. This will be wonderful, and a great challenge: "Tiento De Las Nieves" is a very difficult piece to perform. To keep the groove, the flow, the timing is essential, you need so much focus. We played this when we recorded, and believe me it is not the first take recording!

I know it's probably impossible to answer, but maybe you're already working on it: where your next issue is going to bring your sound research?
I think the adventure of sound is the vision of something which stands beyond, behind and within the passing flux of immediate things; something which is real, and yet waiting to be realized; something which is a remote possibility, and gives meaning to all : an infinite quest.

And finally, what projects are you working on in the next months?
A audiovisual live remix of movies Tron(1982)/Metropolis (1926) with a 360° projection (at Gaite Lyrique in Paris 6 Dec). Working with Jana Winderen on a series of live performances for 2015/16 at special sites and outdoor spaces. A remix of Rolf Julius “Black(Inside)” for CD release. Part 2 of the "Novaya Zemlya" trilogy. Vol.2 of the "Tiento" series for Denovali.
Discografia