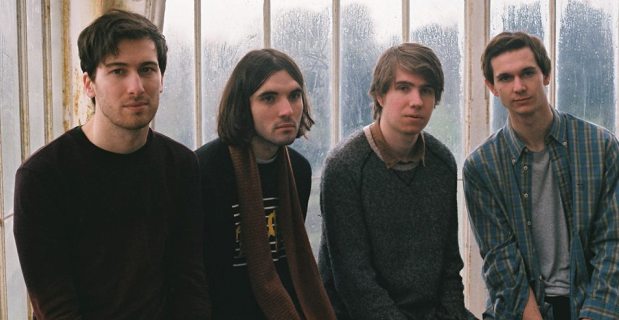 interview by Silvio Pizzica
Tweet
After the fantastic debut album, "Spacehopper", we tried to understand a little more of what is behind the proposal from the band of Reading. The result is an interview amused showing tripwires in a light more playful than what could be expected after listening to them, brainy little sound and rather careful about references to the songs. We talked about them and their relationship with the shoegazer contemporaries, but also with the great masters of the past. We joked about the similarities with Radiohead and Placebo and we removed some intriguing aesthetic curiosity. We talked about the music industry and the independent scene, illegal downloading, Spotify and criticism, leaving us with a hope.

Hi guys. Congratulations for your wonderful first record. I think it's not easy to play music like yours in England today and get noticed for it. How did you succeed? Tell me about Tripwires birth and 'Spacehopper'.
We met when we were growing up in Reading and since starting playing music, have always played together. “Spacehopper” was the first body of songs that felt like they worked together as an album. After various demos etc we ended up recording the album with Nicolas Vernhes, in his studio in Brooklyn last year.

There are some references to the cosmos in your record, from the title itself "Spacehopper" to the cover, full of celestial bodies. Is there anything in particular which links you to the universe or it's just simple admiration?
We love Carl Sagan, ahahah. The whole notion of the universe is so mind-blowing, I would say we have always been naturally fascinated by it, and thus have been drawn to space themes/imagery. Joe also studied space at university so when we can’t watch Carl Sagan, he’s our man.

Lots of musical genres emerge from your work even if nothing is truly defined. Shoegaze itself it's not merely the structure of the record but just a part of it. Now, synthetically speaking, how would you explain your style?
People ask us that quite a lot and it’s pretty much impossible for us to do. We are quite happy to sit under the blanket term of "alternative rock" though I guess. It’s interesting to see how broadly people interpret our "style’" People have called us a shoegaze band the most, but I would certainly agree that it is just part of our sound.

'Revival shoegaze' (let's call it this way just to semplify) revealed lots of interesting bands like S.C.U.M. Or TOY which are similar to you somehow. What's the difference between you?
I think all being from the south of England must have effect on creating the ‘similarity’ between these bands. Much like the garage bands that have come out of San Francisco etc. As soon as you really listen to the individual bands you spot their individual characteristics and traits. That aside, an obvious difference between us and a band like ‘Toy’ is that they are a lot more popular than we are, ahaha.

Listening to your tracks (“Plasticine”, “A Feedback Loop Of Laughter”, “Love Me Sinister”, “Paint”, “Under A Gelatine Moon”) you can easily recognize many old-fashioned electronic frames which seem to recall the hypnagogic pop that Keenan defined on The Wire “pop music refracted through the memory of a memory”. Is that a nostalgic choice, a matter of musical composition or it's just because you wanted to add a touch of style?
A lot of our favourite music makes us feel nostalgic, it really is a powerful feeling. That said, we have never consciously thought that we wanted to sound like a specific era or time, it’s just not the way we approach making music. That doesn’t mean fight against anything we make that nods to the past but ultimately we believe in songwriting, a good song is a good song, played in any era.

Should comparisons with Placebo only concern the vocals? Is there anything else about Molko's band you think inspired your work?
I can see why people think the vocals sound like Placebo in places. We have never really been big Placebo fans, but few of us were into them for a bit when we were in our early teens. Maybe in someway that has contributed to any ‘angst-iness’ you find in our music. Maybe, maybe not ha.

Dinosaur Jr and (above all) My Bloody Valentine are probably the bands you seem to honor the most. Do you think they (My Bloody Valentine) are the biggest and most influential shoegaze band of all times?
Probably yes.

Cover colors choice also struck my attention. Is that a coincidence you used almost the same pink we see in loveless cover? Is just a coincidence that the interior on the cover of “Hurry Up, We’re Dreaming” from the shoegaze dream-pop band M83 really looks like "Spacehopper" artwork? Using that same neon pink for other shoegaze bands is pure coincidence or a matter of choice?
Have to say it’s a coincidence. When we lit the house up, we just had coloured acetate to cover the lamps. There wasn’t any decision about what colours we should use, we didn’t even know that it would end up on the cover. Just knew it could be a cool photo of the place we wrote the album.

Most fascinating tracks are those in which folk melts with dream pop and shoegaze sound. How important is the folk element in your music? Which was your primary source of inspiration in this field?
Even though I wouldn’t say we sound like any of these, we love people like Nick Drake, Leonard Cohen, Elliott Smith, Cat Power. I guess naturally, these people have influenced how we approach some of the slower and sparcer songs.

Listening to "Shimmer" It would appear you’re almost honoring Nirvana. Was it your will or my ears have been tricked by something?
Not really to be honest, that song gets compared to Radiohead the most, ahaha. When that song came around though we did decide to embrace it’s poppy-ness and allowed it to be so simple (loud/quiet/loud/quiet etc). We spent our teenage years listening to Nirvana and they were great at that thing, so perhaps subconsciously in some way!

Too many influences, artistic connections and similarities come out listening to your first record and even if it’s not too original or revolutionary as sound, everything is so damn perfect. Maybe the continuous research for the ‘unheard’ made by the critics has distract the attention from pure musical beauty?
Thanks for the kind words. Maybe! We are very much looking forward to making another record to be honest. I feel it’s very natural to compare bands on their first records to other people. It’s how we make sense of them. Even from what we’ve made so far for ‘the second record’, feels really good, and definitely part of some sort of identity about who we are. Sometimes it takes a couple of records till people can understand what a bands identity is, they have more than one body of work to cross reference with!

What is your relationship with the critics?
We’ve been very happy with the reviews generally. It got reviewed well in NME, Q, DIY etc. You have to remind yourself that it all comes down to a single person doing the review, so you can’t take that side too seriously, even if it is interesting to read.

Today’s illegal download is so unnecessary due to the massive presence of music social networks (Spotify, Soundcloud, reverbnation and youtube) and their high-speed, immediacy, usefulness. What do you think about it?
The universal-ness of spotify is nice, but I still feel that people want to own something. Even if they choose to ‘own’ just a file through illegal means. Our record leaked a couple of weeks before released and in honesty we were secretly impressed with how many leaks / how many people were interested in leaking and downloading. As music lovers ourselves, we have always known that serious enjoyers of our music would buy it on vinyl anyway. We all buy vinyl and as far as I’m away we have all downloaded music illegally. Maybe the presence of musical social networks will continue to grow and the stigma attached to owning something rather than just an account will diminish, I think it will take a while though.

Are we going to see you perform in Italy? What kind of show do we have to expect?! Are you strict like shoegazers or wild rockers?I really hope so! It would something we’d love to do. Our aim live is to be like a hairdryer to the face, take that in any way you want!

Bye guys, hope to see you soon, maybe in Italy.
Hope to meet you in Italy at some point.