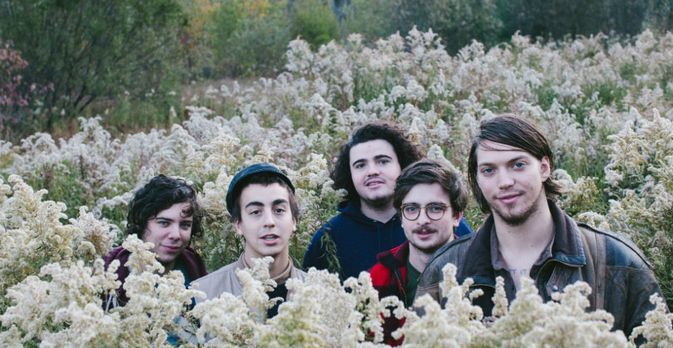 interview by Stefano Bartolotta
Tweet
Before the first Italian show ever of this rock n roll quintet from Chicago, in Milan supporting Cage The Elephant, we met Cadien Lake James and Colin Croom. Their answers show how the band is still having fun in making music, and at the same time they are getting more and more self confidence and a clear artistic vision.

Unfortunately, our website never talked about you before this interview. So, would you like to be the first to introduce yourself to us?
Cadien  - I’ll just say we’re Twin Peaks, five friends from Chicago, we play rock n roll, and we’re in Milan right now…

You said you’re five friends, but I read that t first you were four, and then the fifth man came. How did it happen?
Cadien  - Since we were younger, we’ve always played with him, he’s always been a really good friend to us, and two and a half years ago we worked on our second record and he helped as an engineer and played some stuff, it just worked out really well and we decided this way.

So, how do the songs get born? Is there a main songwriter or do you write collectively?
Cadien  - We are four different songwriters, so, pretty much we individually write songs, then, when web ring them to the table, we work on them together, and we get them finished this way.

Listening to this new album, I think the sound is less edgy and there are many more details and instruments. You already said that one of the reason is that you have a fifth permanent member now, but if you want to talk more about this, please do it.
Cadien - Yes, I think it has a lot to do about having enough time.
Colin - We recorded the album in a much more free environment, we were at a friend’s house, and the recording took us about four weeks in total, then we were in a quiet place in Massachussets, there was not a lot to do, so we were very focused on what we had to do. We had the opportunity to experiment, to create, to expand.

Without any kind of clock or countdown or deadline.
Colin - Yes, we weren’t spending money so we said that we had to keep going, we just wanted to come down to that.
Cadien - We have been able to really play whatever we wanted, to experiment with the tracks, that’s a big deal. We were able to create a fuller sound.

I really like what you did on harmonies, I can hear a lot of nice harmonies on the album, it seems you focused more on them than in the previous albums.
Cadien - Yeah, we have four different voices, so you try to utilize them as much as you can, if we could, we would have harmonies in everything, but we’re no Beach Boys, so we can’t do that. It’s fun and a good way for us to practice, and people appreciate that.

You said you are no Beach Boys, but I think that on the album you can hear some atmospheres that remind of West Coast. The guitar jangles remind me of The Byrds, and if we think about current bands, of Allah-Las, and I’m a big fan of them.
Colin - We appreciate that style of production, and we listen to that kind of records a lot, so probably that’s why our sound is influenced by them.
Cadien - This kind of production has much more quality and makes the sound more warm.

And were you on the same page with the people that helped producing the record? I read that some friends collaborated with you on this.
Colin - Yeah, our buddy Andrew Humphrey worked with us, he also worked with bands like Dinosaur Jr. or Kurt Vile.

These are different sounds than yours, Kurt Vile can be more or less related, but Dinosaur Jr. are really different.
Cadien - Yes, but he got it right away what we wanted to do.
Colin - He also is a funny person, he always calls us “hippy stoners”
Cadien - Which is not completely true, only half true.

I have two favorite songs on this album, so I ask you if you want to talk about one of the two songs or both, they are “You Don’t” and “Holding Roses”.
Cadien - “You Don’t” is one of my favorite actually, it has something unique in it.
Colin - Yes, like the fan we used as a percussion, we brushed this metal fan.
Cadien - There’s a lot of stuff we used as percussions on that song, we also used bottles and glasses. Anyway, I think it’s a good song.
Colin - About “Holding Roses”, we basically recorded it live, we added something afterwards like piano.
Cadien - It’s really like taking a simple idea, keeping it and adding on.

What would you say about your lyrics?
Colin - I don’t think our lyrics are conceptual, they’re like we are young men from Chicago and we sing about this. A lot of songs are about girls.
Cadien - Yes, I think for now we still didn’t find a way to tell something different, from a more mature angle, but I think it’s just another step in the process and we’ll try to find our own voice. In the old days, you wrote lyrics, and as long as the sound’s good, it’s good, but now you try to have more mind on it, and we want to focus on it, for a growth.
Colin - When you’re young, you care more about the music.
Cadien - It’s also just about experiences and reinterpreting them.

Tonight you’re playing for the first time in Italy, so, in case you come back, what can we expect from your live shows?
Cadien - A lot of energy, we work as a well-oiled machine I think, and we bring the rock.
Colin - We’re not the kind of band that stands still, we don’t travel to stand still on stage.

My last question is about the project Our First 100 Days, that you are part of. So, about Donald Trump, there were people who, before he was elected, thought he would not have done all the things he was saying, but instead he’s actually doing them.
Cadien - He’s doing it, yeah, so I think a project like that is important. It feels good for us to be a part of something like that, we’re in a situation where we have to ease a platform that makes our voices as a representation of people that are disappointed. We need artists to step up, because politicians didn’t get it done, so now the people have to try their best to stick together. It’s a little part, but it means a lot to contribute.
Colin - We started this tour three days before he officially started, so we are sad to be abroad and to be represented by him, he should not be representing us.

I read the songs have the aim to bring a sort of social conscience to the listener, but are they already released or do all the contributors write a sing especially for this project?
Cadien - I don’t even know, we still didn’t think about that, we are touring now so we haven’t worked on it, when we come back it’s one of the things we have to do, but whatever comes out, we’ll be happy to make our voice heard.