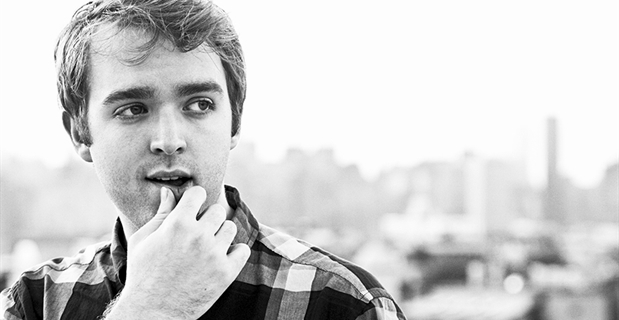 You started recording music at about 20 years of age, and now, at 27, you are releasing your fifth. How do you look, now, at those first years?
One word about that first album - I actually recorded it when I was seventeen and eighteen, but it took a couple of years to come out. I mention that not to brag about how young I was, but just to clarify that I have been putting out records for almost a decade now, and so it’s not like I am crazy prolific. It was easier then, in a way, because everything was new to me, and it was easy to write those first songs without feeling like I was repeating myself.

Where would you put yourself now, with respect to your expectations when you started making music?
I have always had high expectations about what the music itself is capable of, but as for where I am, and where I have been, I’m just grateful to be able to make music, whether it’s a full time thing or in my spare time. When I was young the music industry was just starting to really crumble, so I thought I might be able to coast along and make a living off of recording music, doing soundtracks, et cetera. That has not happened, but the longer I’m around, the more fulfilling it is just doing music for the selfish reason of loving it, rather than the selfish reason of supporting myself.

Can you briefly recap the story of “Gray Lodge Wisdom”? How much of it was written during your treatment?
Well, I had cancer, and first I had four rounds of chemotherapy, and then I had a couple pretty serious surgeries. One and a half of the songs were written before my treatment, but the rest were written during and after, and I threw away several other songs that I did not think met the criteria. The thing about being on painkillers is that they really dilute your sense of reality and, among other things, what makes a good song or a bad song. So after the drugs wore off I decided that I didn’t like some of the songs after all.

You were thinking about “Gray Lodge Wisdom” a few weeks after being diagnosed already. It’s really striking that you wrote such a passionate and inspiring album during such difficult times. Was the mood of the songs changed after your recovery and their actual recording?
If anything, the songs started out being more exuberant and positive and then I tried to turn them into something a bit more complex. I recorded demo versions of most of these songs six or seven times before I was ready and healthy enough to do real studio versions. The haze of chemicals that I found myself in at many points in my treatment did not lend itself to the sort of creative transparency that I need in order to make music that I am happy with, so I would just obsessively record and re-record tracks over and over until I found a good pace and tenor for them.

I read the title of your new record comes from Twin Peaks. If I interpreted correctly your words, the “Gray Lodge” should be the “limbo” or “Purgatory” situation you experienced while recovering in hospital. Also the cover of the record looks very Twin Peaks-y. So is there a deeper relationship with the TV series and your record or your personal experience in these last few years?
Not really, aside from the fact that I was recovering in the area of the United States where Twin Peaks was filmed. I always have an urge to self-fictionalize or self-mythologize my life, and this was one way of doing that. I was re-watching the series at one point in the treatment, and the ideas of the white lodge and the black lodge were interesting to me, so why not a gray lodge?

A difference of “Gray Lodge Wisdom” from your other records is the conciseness. Eight tracks, barely more than thirty minutes of music. Is that also an artistic “statement” of sorts?
No, I just wanted to put this album behind me, and I did not want to release any songs that were of an inferior quality.

You don’t seem content with being labelled as “folk musician”, but does saying “this is your ‘Five Leaves Left’” make you happy?
Sure it does. That’s not my favorite Nick Drake album, but it’s a good one.

You asked for the help of some friends for string arrangements in particular, even though you have a degree in Music Composition, if I’m not mistaken, and you wrote them, in fact, for one of the songs. Why did you have this particular need?
Honestly, I wanted help from some composers because I wanted to see what possibilities they saw in my music, and I wanted to learn from their arrangements. My energy was sapped from the treatments I had received and I wanted to end this chapter of my life, and asking for help from some of the composers that I know and admire seemed like a good way to cap things off. I think I can err on the side of minimalism too often when I write an arrangement, so it was good to see some really sumptuous examples of other people’s ideas.

You seem to receive a particular attention in Europe, rather than at home. You’re touring now in most of the continent – besides Italy, unfortunately -, your record is being released by a label while you’re self-releasing it in the US… Do you think it’s just a coincidence? Do you have any connection to European musicians?
I kind of think that it is a fluke. But to be honest, I find European audiences and promoters to be more fun to perform for and work with, and the treatment that American musicians get here is better than in our own country a lot of the time. So perhaps I’m just more willing to put in the time to tour here than in the U.S. at this point in my life. There are certainly a lot of European musicians that I love, too many to name, really. But my kinship with them is for the same reasons that I feel a kinship with some American musicians.

We know you’re a very prolific artist. So how’s your next record going to be?
I have no idea. I know that I’m going to buy a synthesizer...but I don’t know if that will signal a new direction or not.