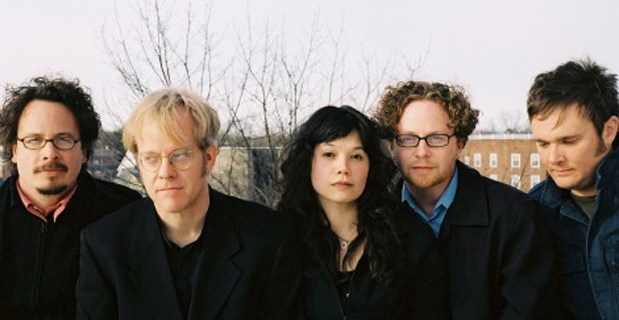 interview by Lorenzo Righetto
Tweet
What has always been a trademark of your band is the great interplay between its members. Can you tell us a bit the story of how you got together, how you first developed your sound?
We were all friends before we were a band. Certainly we were all musicians who played either with other bands or solo - but our social/friend connection (for better or for worse) is what came before and what remains now.

Our creation myth is mostly plain and true: we came together at Dennis Crommett's house during the horrible winter of 2003-2004, when there had been breakups, deaths, and other sobering facts of adulthood laid upon our heads. We drank cheap wine, played guitar in a round robin style, and eventually began playing my songs - songs i'd been amassing for a couple years after my previous band (the Maggies) split. A sound was born, and then clinched when Flora joined (she was the last to join). I still remember our first live show with her at a dive bar - the room stood still, so did my heart!

One thing I get from your first records is a sort of therapeutic feeling. A very intense expressive urge, mellowed down by music. Was that what music was for you, at the time? Is this part of the genesis of your name?
Like, group therapy? Well, I would venture to say that the first couple of albums were born of a lot psychological tribulation, but there is hardly any art that isn't, right? I wasn't trying to write songs that made anyone feel better, I know that much. I was trying to give voice to things I was tired of trying to say with my normal blunt tools of expression.

One of my favourite songs of yours is "Cranky". Can you tell us about this song, about this character?
Cranky is an actual nickname for someone I knew, a friend, and the story in the song is a simple one of missing a friend. It's also sort of a hazy portrait of someone seen in a rear view mirror, as they leave, and a plea - what do you say to someone who has left when you need them? You say, tell me what do i do? The question hangs over a melody very easily.

In "Broken Arm", one of the most known songs of Winterpills, you sing of a broken arm hating its hand, of a farmer hating his crop etc. Have you ever felt this way towards your music?
It's a love/hate, isn't it? Both saved and cursed by these sounds in my head. Tormented by them. All music writing is, for me, a kind of trepanning, to get the hot fever of the endless looping songs in my head OUT. It's the only cure - that or trying to kill it off, which I've never tried to do. I fear it would be a suicide of sorts. So - yes, I definitely have felt that. 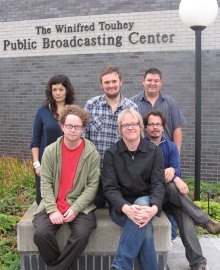 I saw a video of you playing that song in a school, with school girls singing along like in a celebration for the last day of school. At first it seemed a little weird, but then I thought it fell absolutely within my idea of your music. What is your relationship, as band and as artists, with your local community?
That was with a high school group (from the Academy at Charlemont), and they asked to do it! We had a concert up in the hilltowns around here and we'd made friends with them because of a songwriting workshop we did at the school, so they became our opening act. Very fun and a special night. Talented kids. They chose the song.

We occasionally do benefits around our area, which is a small, pretty rural area. I wouldn't say we are constantly or proactively involved in such activities but when good things arise we get involved. One of the best ones around here is a yearly concert that raises money for arts in the schools (here in America, there is no money for art in schools, or much anywhere. Art is considered pretty superfluous and silly.)
Many local musicians impersonate famous ones according to a theme for a daylong outdoor concert called Transperformance. It's a highlight of our late summers as many egos are checked at the door, many costumes are donned and much humor and mayhem ensues. Usually several thousand people attend and it's a huge party. Last year I was Elton John.

A great band which does not remind me of you musically, but for the fact that they have been producing, in a sort of cozy anonimate, inspiring and sophisticated (but still) pop music, are your neighbors Innocence Mission. Do you have any relationship with them, even a fictional or a spiritual one?
We sort of know them or brushed against them; our guitarist flirted with recording with some of them a while ago, but it didn't come together. We're all fans of theirs, no doubt. Beautiful music. I see the sonic connection. I think they are also something of Christian band, which we are not, so there is that difference.

Most of the interviews I found on the internet date approximately around the release of "All My Lovely Goners". This is one of them, of course. How do you feel regarding this late discovery of your music, to be sieged like you were the next big thing when this is actually your fourth record? Do you think that, in older times, you would have had no recognition at all or an easier path?
It's a good question. I have no idea how we would have been received in the 1970s, for example. Might have been better, if we'd had the proper management. Of course, the internet is supposed to be the Great Equalizer, and sometimes it is, but it also has opened a floodgate of mediocrity, sameness. Nowadays you can do much without management, but the playing field is almost too level.

I'm not sure anyone regards us as the next big anything. We certainly don't think we're doing anything particularly new. How do you add to what exists now, in rock or pop or folk or whatever? The book's been written for some time now. All we can do is be craftspeople with certain obsessions and loves and if someone thinks it's 'new', then who knows, maybe it is. It's like everyone in popular music now is adding bits to the giant sandcastle that has been built since the 1950s, and while many artists built whole turrets and staterooms, now it is only people adding one tiny grain of sand at a time to a massive, already existing wall.

One thing I always ask myself: does this virtual attention translate in "reality"? For instance, more requests for live performances, radio sessions, and so on. Were these months which have followed the release of this new record any different from the other releases?
I was hoping there would be, but its been about the same as other releases. In my view we don't tour enough by far - but, not being 22 years old and full of endless energy and no attachments, it's not easy. We are all adults with babies and jobs and relationships and all these things are vital to our creative lives as well. I'm glad i have a life outside of music, otherwise, what does one draw on? The music business, which is an extremely dull subject. 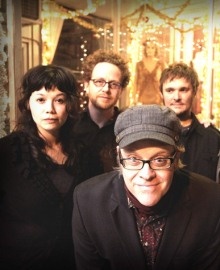 Listening to "All My Lovely Goners", I find that there is a kind of statement from the band, saying "Hey, we're here!" Was that the "point" you wanted to make?
Everything I've ever released is a shout such as this, right? So, yes, that's what we're saying. Listen to this! Be quiet and listen.
Musically, I think it's all been coming from the same place, but this time in terms of production, artwork, etc, we did go the extra mile or 10. Not sure it really helped get us more attention, but we're truly proud of the the final product. My mom loves it. I think its probably the best thing we've done. But I don't know. Time will tell. Thank God I don't have to decide these things.

In particular, you have changed a lot your guitar playing style. Strumming is hardly present, when it was always in the front of your music of your previous releases. Why did you go for such a radical change?
Actually there is a lot of strumming on this album, it's just mixed differently. Also, maybe it was the microphones we used! Made everything sound different.
With this one, I was going for a more 'orchestral' approach to all the band instruments - the relationships are balanced differently than other albums. You can hear some of this attitude too on "Tuxedo of Ashes" (our 2010 EP).

You can be named along the "elder brothers" of the new Americana movement of the last years, along with Mat Brooke, Sam Beam and others. What is your point of view on the current scene?
I'll take that as a compliment, as I'm not sure either of those guys have ever heard of us! Also, I'm no authority on the Americana scene - but I can say that I've really liked recent releases by Kathleen Edwards, Father John Misty, Laura Veirs, Wilco. Not sure what scene Sun Kil Moon is in (acoustic shoegaze?), but I've been listening to a lot of them lately too.
Music is as alive as ever. It's just much more disposable now. As is almost everything.

Can we hope to see you play in Europe (possibly here in Italy)?
I wish I could explain why it's been so hard for us to get over there, but we are determined to do it soon. Probably will be Flora and myself as a duo, at least to start. I really hope it will be this fall.
Discografia

All My Lovely Goners