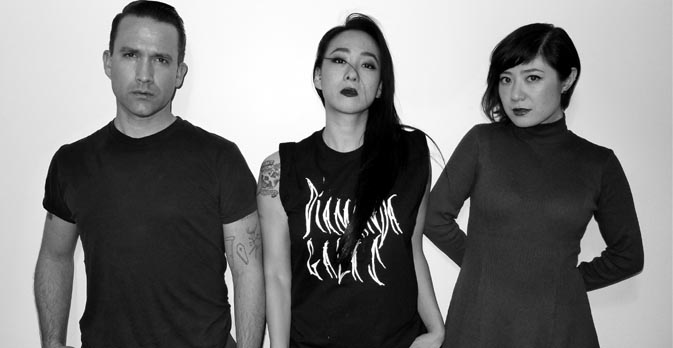 After the Q & A on Reddit... another questions! About "Girl With Basket Of Fruit" - or in general - is there still something important that you haven't yet say?
That presupposes i said anything important in the first place...

Touchè. Connected to the first question: what is your relationship with social media? I see a lot of participation from fans all over the world!
It is an odd one for me. By nature i am not a social person and don't have any social media that is not connected with Xiu Xiu and if i was not in Xiu Xiu i would not do any at all. That said it is now an obligatory part of being in band, obviously it is how one communicates with people who are interested. Mainly it is incredibly nice and 99% of the time people are funny and clever and kind. As a band we are so lucky that people are so sweet to us. The odd part is doing something that my personality is not suited for but that is so rewarding because of people's responses. As well, if it is something that we have to do we try to do a good job and have it be thoughtful and hopefully not boring. If you have to be alive you might as well.

First feedbacks after the publication of Girl With Basket Of Fruit? Which aspect are you most satisfied and which less?
I NEVER read reviews, my skin is too thin and i am too feeble and sensitive but on the aforementioned social media, it seems like it is has been surprisingly positive. We took a lot of risks with this record and I am grateful that most people who have listened to it seem to be getting something from that. It is encouraging. Thank you affiliated earthlings!

The places where your music is conceived are very important: where is "born and lives" Girl With Basket Of Fruit?
That is observant of you. It was born and lives in horrible dreams, demonology, beneath consciousness and thought, in the arms of forbidden and unhealthy love, palm trees, fruit, insects, teenaged possession, the history of racial violence in the United States, drums, propulsion and both drug induced and spiritual hallucinations.

Is there a new and extreme approach about the voice in this record? Is often treated like an instrument, sampled, cut, deformed, like a sound or a beat, but also pure, emotional and touching.
We tried a lot of things we had not tried before. Somethings like you mentioned, excessive editing pulled out from stream of consciousness improvisations and using more crushed distortion. Also singing out of guitar amps and bass amps, pitch shifters and through synth filters gave the sound a more aggressive, beaten up and unhinged trajectory.

When was the moment of your life when you realized you wanted to be a musician, and Xiu Xiu was the best way to be it?
It took me a long time to totally commit to it. I had played in bands since i was 12 and made up pretend bands when i was 8. Drawing logos and playing air guitar etc. My mother especially made it clear that she did not want me to pursue music and so I went to social work college and tried to have normal human service jobs but all while still playing, neither full invested in either. A professor I had told me it was ok to be a musician if I wanted to, that being a distracted social worker was not doing anyone any good. My dad, who was a musician, told me to stop worrying about promotion and just make the best record we could make. I told myself that I would put everything I had into making "Knife Play" and if it didn't work out than God had other plans. By some miracle that recorded ended up on a good label and that was the beginning of going full on all the time as music as life.

I see Xiu Xiu's discography as a desire to go inside and against the most dramatic aspects of our world. This mission could commit you for a lifetime! You could be consumed by this project?
(Laughs) I would say that indeed i am consumed by it!

Xiu Xiu's production is often referred to as a shocking experience. In everyday life, what scares you ... and your dreams, what makes you feel good?
Annoyingly i am anxious all the time and worry about:
environmental collapse
war
car accidents
dogs
serial killers
my family dying
my best friend dying
money
increasing poverty
politics
racism
throat problems
playing badly
running out of ideas
macho pieces of shit
not being able to sleep
people killing animals for food
and
my hair looking stupid

Xiu Xiu is also an aesthetic and visual universe: how much you work about that? Or it is spontaneous choices?
Most of that Angela does, she does all the videos and has done the last several record covers. She decides which photos we will use and makes sure i dont do anything dumb.

If you do not haveto be a musician anymore, what else would you do? You have at heart the injustices and the weakest: you would be a great politician, expecially in these days ...
I think about this a lot. I will try and being a professional musician until I die but that is not easy to maintain of course. I would go back to being a social worker. Having had a decent run making records i feel like I would not be as unfocused as I was before. Or i would grow mushrooms.

What are you passionate about now? Books, TV series, films, music, exhibitions?
It is what makes life worth living!!!
deeply and crazily all the time!!!
Latest favorites.
Books; The Door by Szabo
Exhibitions: Outliers and American Vanguard Art at Los Angeles County Museum Of Art
Tv series: the golden age of tv is over... :(
Films: Capernaum
Music: Muddy Waters, his Best 1956-1964
Have you ever felt like a privileged person?
Ummm... Iam white, a biological male, live in california, am a musician for a living and grew up middle class. YES insanely, preposterously, egregiously, vomitously privileged.

What should we expect in the next Xiu Xiu's gigs?
We have a new live line up which I am SUPER excited about. Thor Harris will be in drums, clarinet and vibraphone and Jordan Geiger on synths, sampler and vocals and I will be playing guitar, whistles, singing and playing sampler. We will be playing new songs and lots of older songs sometimes like the record and sometimes totally deconstructed. We will go as deep, intense, hard and bonkers as we can. The loud will be louder than ever and the quiet will be quieter than ever. We will cry every night that Angela has to stay home this year. (She has a grown up job)

Girl With Basket Of Fruit

Plays The Music Of Twin Peaks

Dear God, I Hate Myself