Let's begin with your present. How is the promotional tour going? Are you getting the recognition you deserve, at least in your home country?
Yeah, we didn´t really do a tour for the record here in Sweden. Just a couple of shows in Stocholm, but I think they went really good and were quite enjoyed. Our European tour, which ended a week ago or so, went good as well. This was our first tour backed up by an album release and that was really noticed I think.

Seeing you live seems a pretty distant perspective - unless you contradict me - so how do you sound live, compared to your studio expression?
I think partly our sound live really depends on how well we can recreate what´s on the record, in regards to adding more people to the setting for additional instruments and stuff like that. But I think all of that is changing more and more since we are now a complete band again with our new guitar player Anton Toorell. He has really made an impact on the way that we sound on stage lately. Over all, I should say to answer your question, it´s all quite punkier live I guess..

At your career stage, supporting a bigger band would probably be best to let people know about you and your music. How remote is this possibility right now? If you got to choose who to support, who would you go for?
Well, I really don´t know much about that actually. Though if I was to choose i think i would like to raise June of 44 from their grave and be the support for their reunion tour.

Your label claims on your Myspace your "Chicago" origins. Do you also have youth frequentations with post-rock and/or a classical education?
Yes, a bit I suppose. I can only speak for myself of course, but I used to listen a lot to Mogwai, Explosions In The Sky and their likes, and also some classic composers such as Philip Glass, Steve Reich and stuff like that.

Was the evolution to pop experimentation natural to you?
I´m not sure i understand, but I guess so. In the beginning Yamon Yamon was more something of an ordinary postrock-band. It´s not like it was something really forced or well planned what came after, I guess we just wanted to make a little happier and more direct music, adding vocals was of course an important thing to.

What really impressed me, for a young band like you, is that entire year of recording you went through. Well the first question has to be: was it really a product of what you found necessary for the development of the record, or were you caught in endless, exogenous difficulties?
I guess the main reason for why it took so long time was that we all have full time jobs more or less. Also we weren´t sure what would happen to result in the end. If, how or when it could be released so to speak.

What was the most challenging part of making "This Wilderlessness"? Composing it, recording it, mixing it...
I would say the most challenging part was the finishing of all the recordings. We recorded the drums, bass and some rythm-guitar pretty fast from what I can remember. The hardest thing came after that I think, for me anyway. Puzzle everything together with additional guitars and keyboards and things like that. I guess that part was also the most fun, it´s were the songs came alive in a way.

Did your sound change during the year, or you had a precise objective in your mind? Did songs change: some of your tracks seem being made of different pieces - still in perfect harmony - like "No Depression", or "African Nights"...
Yeah, i gues you could say that. Since the record took so long time, ideas started coming to your head about the different directions a song could take. We didn´t change or move any parts in general, it was more a question of differnt thoughts on the producing part. We did experiment a lot though with different parts on a couple of songs, for example those you allready mentioned, but that was more like before we went in the studio. 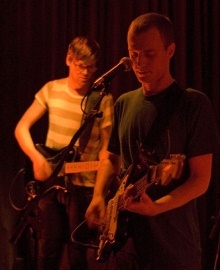 The main thing that attracts me of your record is this apparent "absence of wilderness" that you claim in its title. You sound "urban", like a jam session in a bar in some American metropolis: still your music flows naturally, in the sense that it's not detached from the natural world. There is a longing for something you seem not to know, but it is still there, nonetheless. Can I ask you a comment on this? Do you recognize this as a theme of "This Wilderlessness"?
I think the type of sound, or "theme" as you call it, was something that wasn´t to planned. It just felt like the right way to go I guess. We wanted it to sound really clean, a bit controlled and complexed in a minimalistic way, there might be a connection there to what you are talking about I think.

A lot of different influences make their appearance on the record. Take "High Class" intro, for instance. Are we getting a glimpse of what's to come in the future?
I don´t really know if that song in particular says something about what will come, actually I must say that the new stuff that´s coming up in the rehearsel don´t really sound to much like anything from the previous record. Of course you would still see a thread there, but I would say it´s not going to be as well polished if you know what i mean..

I was talking with some friends of mine about Yamon Yamon, and they go like: "Yeah, Scandinavian bands are good, but there usually is no great personality in them". And I can see what they mean: look at some equations such as Shout Out Louds/Cure, The Tallest Man On Earth/Bob Dylan, Kings Of Convenience/Simon And Garfunkel, finally you with Sea And Cake or American Football... What's your point on this?
They might have a point there when it comes to a couple of those examples. I mean, when it comes to only the sound of a band/artist. But my belief is that there´s only a real problem if that´s all that sticks to you in the end. Everybody borrows these times, it´s just a question of adding something from yourself to it. When it comes to Yamon Yamon, I don´t feel at all there´s a lack of personality. I see it more like that we were a band at an quite early stage when we made this record.

Your label states - and the "This Wilderlessness" page is one of the most agreeable press dispatches I have ever read : "Yamon Yamon is a confident band. Confident enough not to trust or rely on what's in fashion". You obviously don't - and shouldn't - care, but do you have the feeling your kind of music is not "fashionable" right now?
I don´t know really, and to be honest I don´t care to much about that kind of stuff. Even if that would be the case. In my humble opinion, fashion and music are both better on their own.

What does a young band have to do, or possess, in order to be successful in the current music industry, in your opinion?
It depends on what you mean by the word "successful" I think. But for me the most important thing about music is it´s capability to affect me in some way, there also has to be a genuine feeling about it. I don´t like it when you can here that people are doing it for the wrong reasons, if you get my point

Do you have some particular tip from Stockholm, a new band?
If I was to name some of the most interesting acts from Sweden right now I think I´d say Ingenting, Britta Persson, Bob hund, Damn It I´m Mad, Elias And The Wizzkids and of course all the other bands at Tenderversion.

Ok, last question. What kind of promise would you make to people in Italy who support your band?
I think i can promise that we really want to come down to play some shows, whenever it´s possible. It would really be fantastic i think. 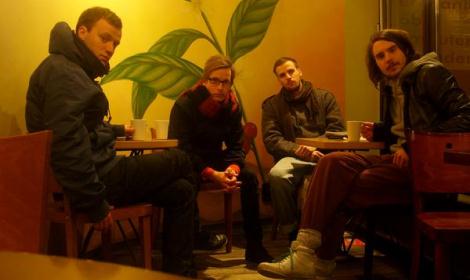