intervista di Claudio Fabretti
Tweet
An interview with Carla Bozulich, released during the Evangelista's tour in Italy, in January 2009.

On your latest record, “Hello, Voyager”, you've moved from solo recording to being a band leader. Why did you make such a decision and how this choice changed your music?
I really wanted to be with a band again. It's much more fun to record  with people sharing ideas and then touring with them. It's like we're a gang. When we tour we move through cities like pack of wild dogs.
When people see us coming they hide they either scream, cry or throw up. We love people.

I think "Hello, Voyager" is more focused on songs. Not in the  traditional song-format, of course, but songs such as "The Blue Room" and "Paper Kitten Claw" seem to be more melodic and "structured" compared to the tracks of "Evangelista". Do you agree? Did you change something in your composing process?
We wrote most of the album the night before each day we recorded the songs. I always do things without thinking about the process very much. But on “Hello, Voyager” it is clear that the influence of Tara Barnes infiltrated my mental frequencies and made me lose my equilibrium. Doth it was a much much more invisible river of impulsive ideas. That and the fact that I did not sleep for the whole session (no drugs) made a lot of the album the way it was.

Your live performances have a very magnetic power. What can people expect from your concerts?
A storm of aural metal shavings flying through the air coated in honey and taking out your hair. And really, I will always swear, if I look like I am going to break my back because the music has excited me so much that I can not control myself. That is what is REALLY happening. it is not a show.

"Evangelista", your third album as a solo artist has been released on Constellation. Your music fits the "Constellation spirit" so well that musicians from various bands (A Silver Mount Zion, Godspeed You! Black Emperor, Black Ox Orkestar) play on "Evangelista". How was this project born? How did it take form?
“Evangelista” was a concept born in a night of insomnia while sleeping in a bed with two beautiful people. The sun came up. They were so lovely. I felt every emotion, as my life was changing forever at that time. It was a desperate need to communicate beyond my own importance.
I needed to say something about the beginning and end of the power we all hold when we build our energy as a group. When we see the horrible things in the world and refuse to give up and we come together, not through "god" but through our common power, SOUND AND LOVE. we love music. That is what we share. That is what we can use to protect each other and live and learn and love. The Montreal crew are incredible loved friends who encouraged me to develop and record this music and they made it possible for me by inviting me to record at hotel2tango and playing their beautiful sounds on the record.

"Evangelista" is truly a dramatic experience. You describe it as an "exorcism". Can you explain us why?
I never said it was an exorcism. That was something someone made up in a press release. I don't need an exorcism. If I am full of demons they are mine and I will use them as I wish. If there is someone out there that needs an exorcism, let them come to the gig. Music is a healing thing and I mean to breathe life into anyone that wants it.

One of the most striking aspects of your music is your beautiful voice. I've read you really liked a description of your voice as "inhabited." Can you explain us why... and who inhabits your voice?
I LOVE all animals and they seem to love me.

Some people think that Patti Smith is your biggest influence. And  you did say she was "the most defiant woman" you had ever seen...  Some other critics compared you to Diamanda Galas and PJ Harvey...  Are you happy about all those comparisons?
I am proud to be mentioned in the same sentence as those women. They are all beautiful and strong. There are so many more but really there is never enough. Speak out! By the way, let's talk about how AWESOME Lydia Lunch is. She is the most outspoken, brazen, opinionated, smart monster I know.

You experienced some dark and gloomy periods in your life. I know it was a long time ago, but your music has kept a very dark and desperate spirit. What is about darkness that attracts you?
I love the fact that people wear less clothes in the dark. also, when we can't use our eyes things become very surreal and the idea of "trust" is much more important. You must trust yourself that you will not step in a hole or slip on a child's toy. I am, for better or for worse, some kind of magnet for listening to people even when they are not talking. And I listen to myself far more than any person should. This is like a tornado inside of me and makes me furious. Then I can transport all of it into love and frustration and trying to be a better person. Music is the only way to be completely non-existent.

I think Geraldine Fibbers were a fantastic band. Punk approach and country melodies made a gorgeous "incest" in their songs. How did you manage to combine those different musical directions and ideas?
We started out just playing real country songs, George Jones is my favorite. We did some of his songs and some of the songs I had written on tour with my industrial noise dance band, Ethyl Meatplow. Then, when Ethyl Meatplow broke up I did not have a chance to do any yelling and screaming anymore and I started to be sad. That is when the band started to change into some combination of country and hard, confrontational sounds.

In one interview, I read that you consider yourself a "worshipper of  the drone". Can you explain us why and how the "drone approach" influence your songwriting process?
The drone is the most constant thing we can trust and depend on in our lives. We are always surrounded by the drone, even if you close your eyes at night in a very quiet place you can hear the sound of a constant hum. Then you have traffic and electricity and cat purring. Then you have guitar feedback at piercing volume... It is all so intoxicating.

What about the future? Have you planned another album as Evangelista?
We are getting ready to record another Evangelista album very soon. We've written 3 new songs here in Italy in the last few days and will be performing them at all the shows this week. The band is very hot right now. Tara Barnes and Dominic Cramp are from Oakland. Ches Smith is from Brooklyn. Francesco Guerri is a fabulous improviser from Bologna and I live everywhere! The future is more travel. More friends and kisses and cats and adventures in sound. We hope to see you at the shows if you let us, we will give you something special to take home in your beautiful black little heart.
Discografia 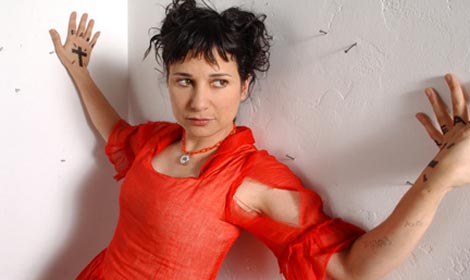