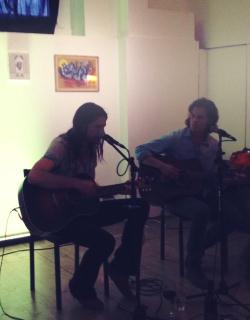 It's Jonathan Wilson's first time in Milan, and the occasion is an acoustic showcase in the extremely intimate atmosphere of the Santeria, in a free spot during the European supporting tour for Tom Petty & the Heartbreakers. Flared jeans, a multicolor tie-dye t-shirt and gathered up long hair, the singer-songwriter from North Carolina perfectly embodies the imaginative world living in his music, on the verge between the early 70's nostalgia and a firm hold on the present.
With him, tonight, just Omar Velasco's twelve-strings guitar and Jason Borger's Mellotron. The hall is pretty small and cozy, the wall's covered with a drawings exhibition and the green lights illuminating the backside can only increase the feeling of finding ourselves at a meeting in the late 60's San Francisco - a feeling that will just grow throughout the evening.

"Can We Really Party Today?" gets the climax started. A safe choice, but nothing like an understatement, is devoting the first half of the set to "Gentle Spirit"'s comfort zones, with the title track following "Desert Raven"'s milestone. But that's just enough time to get confident with the situation, to find the right dimension, the right vibes to turn music into a mind's experience, and there "Moses' Pain" comes, a new tune from the forthcoming album (hopefully out in Spring) - you just have to close your eyes for a while to find yourself on the Mississippi's banks. Close your eyes, and never open them again. Letting "Magic Everywhere"'s and "Valley Of The Silver Moon"'s melodies flow into you, their psychedelic guitar - purposely unplugged by Wilson himself to let every shade unfold -. nature's evocative imagery, the power of human's mind. It's time for the last song, and it's a Quicksilver Messenger Service's cover, "Just For Love". Not even the audience, slowly leaving the room as Italy vs. Germany's kick-off is approaching, is helping to remember that, no, it's not 1970, it's 2012.

It's right after the one-hour showcase that I meet Jonathan Wilson for a nice chat:

So, how's the tour going?
Good! Yes good, it's been great, every show has been a big big show.

You've been supporting Wilco last fall, and now you're touring with Tom Petty - there is the feeling though that after the Royal Albert Hall shows this support turned into a double headline...
Oh, wow! That's a good thing. But those guys are the best, for us being in tour with them is like a honour. You know, when you're sixty, and that's what you sound like, you know you're doing good, so.

Do you feel the difference between a supporting show and a headline show?
Oh yeah, there's a huge difference between the crowds. In supporting tours, the crowd is there maybe not to see you, in this case they're to see Tom, but it's still a good crowd. Supporting is tough, but it's something that you have to do, and be doing it for Tom, probably, for me it's the top supporting gig that there is in the world, I can't think of one better.

So, this tour has had huge venues and huge crowds, but tonight we saw you playing in a very small and intimate situation. Which one fits you best?
I think maybe somewhere in the middle for me... you know, we just came from Paris, and the place we played there was a beautiful theatre, with a balcony and a second balcony, you know, that type of a space is the best for this band - which is usually like, maybe, a few thousand, that for us is the right size of space. For us playing in those huge spots is just hard, they're so big, things are just bouncing around, it's very hard to distinguish the show, the sound, all the guitars are going to get lost.

And, as for the vibes?
Yes, there's much better vibes too.

To be true, I can't properly think about "Gentle Spirit" being played in, like, a stadium or an arena...
You know, that's fun too, you know, that songs sound cool outdoors, that's a good vibe. You know it's exciting to play with all those speakers, like fifty millions speakers, that's exciting, but...

I'd like to go back a bit, at the start of your career. You were born in North Carolina, and started there as a musician. You came from the birthplace of people like Thelonious Monk and John Coltrane, did that in some way influence or affect your background and songwriting?
It definitely did, because there is a pride that you have about those people, and several times is something that you brag about, you know, it just means that it is a special place; and that IS a special place, as far as the musicians that sort of came out of that state, it's kind of weird that there are all these guys that came out of there - they didn't really come out of South Carolina, you know, there's a few guys from South Carolina, but there's a lot of guys from the North, you know, it's just a thing, the same as Texas, there's a lot of guys from Texas.
And me, I'm really into jazz. I'm a big fan of Jazz; the beginning of the album has got a kind of McCoy Tyner vibe, with the piano.

That intro really impressed me; "Gentle Spirit" is basically a guitar album, but it opens with a grand piano, and that kind of disoriented me, but in a positive way, I mean, it was just great.
Oh thank you, that's a good thing.

This record came out four years after your first release, "Frankie Ray". What happened in this long meantime?
It took some time to find the right team, to be honest, so I turned down deals, I turned down like five bigger things too, because I just knew that it was right; so it took me a really long time to find Simon [Raymonde] who's the head of Bella [Union], he's the best guy, he's just one of a kind, you know, sometimes to find a soulmate it just takes forever, and I refused to put my stuff out with bad vibes and the wrong energy, it's not going to work, it's going to sink and then I'm going to go crazy and get depressed. So that was basically the story, but then, when it came out I didn't really know what to expect, and then the response was fantastic.

In the early 2000s you moved to LA, to Laurel Canyon. What brought you there?
Well, I had been there previously, then I moved back to the East Coast, but in 2005 I decided to go back to California, to the Canyon. I think it was just the sunshine and the vibes, that's so good, so I decided to go back; and then from there things kind of exploded, with my studio and all the stuff, so yes, that was the main thing that I was doing, during these years.

I know that you're studio is, like, the only one left with an entirely analog equipment. Why this choice?
Yes, right. Mainly just because of the way it sounds, it's like if you see a film and it just looks so beautiful against some sort of HD shots; like those new shows, like 90210 (or Friends), they look like shit, but if you see a beautiful film it just looks so balanced, so beautiful the colours. So that's the same thing, the tape does that to the sound, it just chills everything; with digital I just have to fight, always have to turn a million objects on to make it work, with the tape you just go and it sound good.

Is that the studio appearing in the "Canyon in the Rain" video?
Yes, it is.

You are usually referred to as the one who brought the 60's and 70's vibes to the Canyon, I read you often host big jam sessions at your studio. So, is it still like that?
Yes, that was the vibe, it was just like lots of parties and jams, when people were in town they'd come to my place, when they passed through maybe on a tour. So that were tons of good jams.

Your lyrics are a mixture of real life event and lysergic images. What inspires you writing them?
Yes, that's right. Definitely the state of California, for some of the songs I would go really to Big Sur and come back home and compose the song, or I would go out to the desert and then come back; so it occurs, but, you know, it's just basically because what you're surrounded by there is so beautiful. But there are some other things that kind of have to do with some other types of consciousness and for me a lot of that is, you know, maybe you're stoned, you're high, and just thinking about things.

In your songs you talk a lot about the spirit, life, the universe, circles. What's your relationship with spirituality?
It's a good one, I mean, it's there, is valid, it's something that I sort of ultimately, feel, that I always got my eye on and try to concentrate on, like the relationship of me and some sort of something that's inspiring to me first and then tell people. Yes, just like downstairs playing, it's kind of like it's me, and the tune, there's like a team, you have to just try and stay on the horse, like a jockey.

I can hear a lot of British psychedelia in your music, like Pink Floyd or the later Beatles. Am I right?
Yes, exactly right!

That is kind of strange from an American musician, it never happens that often.
Yes, and that's good, I mean, some of that happens definitely with Tom Petty, he's really into British stuff, but not exactly the same as me, well, he's done stuff with the Beatles, Tom's been a sort of a Beatles, it's weird. I don't know exactly, there's not a lot of bands doing what my band is doing now, it's all about trying not to be pegged as something - a jam band, a singer-songwriter guy - so we constantly try not to be exactly the same thing, and that's the fun part!

One of your latest works as a producer has been for Father John Misty's "Fear Fun", how did this collaboration start?
Well, Josh came to town, he came to California, he packed up all shit and moved from Seattle; he had a girlfriend in Seattle and he stopped that, got in a van, and he just happened to be where I was working, he was doing a show in town, that was the first time that I came across Josh, and we just became kind of best friends; he came right into my studio, and grabbed all my iPhone contact list, all my best friends, my girlfriend, all my ex-girlfriends, so we couldn't but become best friends.

Even before reading the credits of your records, I could recognize your guitar in "This Is Sally Hatchet".
Oh, good, good! That's like super Beatles!