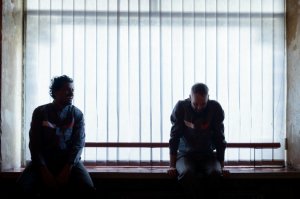 1115 is the experimental kraut-rave-IDM project that includes Grey and Fehler Kuti. "Post Europe" is the new album that will be out on June 9th via Alien Transistor. It was produced by Markus Acher and Cico Beck (The Notwist, Joasihno). We have the pleasure to premiere the official video for the track "People Get Ready". It was directed and animated by Giuliana Catalano.

The video was inspired by the themes touched in the album from which the track is extracted. It describes in a rudimentary way an escape, a travel, a path, a quest, a return. The title of the album, Post-Europe, attempts to capture this moment of disintegration of the European project. Hence, the term post-Europe contains a question about identity that is impossible to ignore, and that can be a call for a new way of living together. Beyond the horror, the exclusion, and the loud voices the background noise of a universe that knows no borders emerges, where the oppressed finds peace and equal opportunities for self-determination. A noise that gets mixed with the diesels humming in Curtis Mayfield's song.