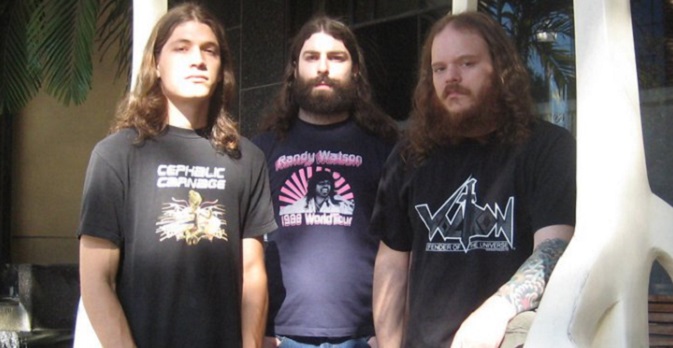 How does Gigan come about?
After many years spent in other bands I felt it was time for me to do my own thing-with the only limits being my own imagination!

What was your mindset when you first started the band?
That the world was at my fingertips... And it was time for me to take over.

Gigan: what does the name mean?
GIGAN is a Japanese word that means "False Eye"- It is a reference to every human's ability to see through their "mind's eye. 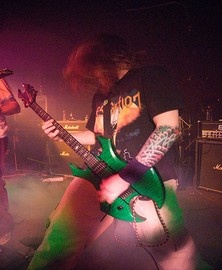 Before Gigan, you played in Hate Eternal. What do you rememeber of that experience?
It was a great learning experience for me! I am honored to have been a part of Hate Eternal's history, even though my involvement was quite minute! I learned all the songs and performed in two videos-but never played live or recorded with the band. I quit to form GIGAN before that happened.

Why did you decide to play death-metal?
I have been playing metal since I started playing the guitar when I was nine. I am 34 now and am well versed in all styles. As far as why? I love playing fast, I always have! I have always had a lot of pent-up emotions and death metal has always been a good "release" for me! I express myself creatively in many ways, but the guitar has been a good friend to me. First and foremost though, I am an artist.

Which are your most important influences?
I am influenced by all things around me all the time...I am especially influenced by my imagination and the world around me.

Your sound has a pronounced  lisergic and space-rock touch. I know Hawkwind is one of “your” band, isn’t it? How would you define your sound?
I LOVE Hawkwind!!! I would define GIGAN as "psychedelic extreme metal". The more colors, the better!

Ten essential albums for your musical training…
Here is 15 or so, in NO order:

any and all aggresive classical/orchestral music.
That's just a few..there are too many!!! :)

Ah, Goblin! Any other italian band you like?
Putridity is cool too...and Fleshgod Apocalypse. Hour of Penance too...

When and how you met your fellows?
I met both John and Kaish while on tour with GIGAN. I met Kaish when GIGAN was touring with Vital Remains and I met John when his band opened up for GIGAN in Tampa, FL. 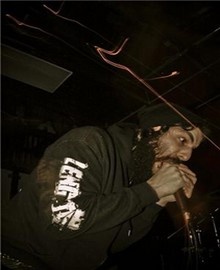 Ok, a little retrospective on your albums. Let’s start with “Footsteps of Gigan”.
"Footsteps" was supposed to be a demo, but when we recorded it in early 2006 Index Entertainment liked it so much they wanted to release it!

Then, the great jump with “The Order Of The False Eye”
This was our first full length album...we recorded with Sanford Parker in Chicago, IL. After we recorded this, we did MUCH touring!

I think in "The Order Of The False Eye" there are many Gorguts ("Obscura" period!) recalls. What do you think about it?
There is a riff or two or three on "The Order of the False Eye" that Randy wrote that were heavily influenced by "Obscura". Anything other than that is pure coincedence.

Ah, what about “Unnamed”, the long jam at the end of "The Order Of The False Eye"? A very particular moment... Is it a bonus track or not?
It was meant to be a unnamed bonus track. That was just one section of a very long improv jam. It went unnamed because it was just a bit of fun...

And then “Quasi-Hallucinogenic Sonic Landscapes”. What are the most obvious differences between this work and the previous albums?
"Quasi" is definately our most focused and deadly recording yet! Biggest differences are a cleaner production and superior songwriting. We returned to Sanford again to record this one. Absolutely the best GIGAN yet!

Is there a concept behind the eight tracks of this release?
No specific concept running through the record, except the overall GIGAN philosophy of "let your imagination be your limit"!

Why the "Quasi-Hallucinogenic Sonic Landscapes" title?
When people picked up the album, I wanted them to know what they were going to be getting. The album title is a description of the album's complete feeling and what it is.

What was the writing process like for this album?
Very intense, but also very successful! The process was smooth and once we got the the studio, the recording process was excellent. We worked with Sanford Parker again and he did a killer job!

What inspired the lyrics and how did you go about composing them?
All of my lyrics are composed at different times when I am in different moods.  Inspiration comes from everywhere within my mind. Whatever my mind gives me, I write it down. Usually I have the specific concept first..then the words just come to me.

Are there any tracks on this disc that are personal favorites or that have good stories behind them?
One of my personal favorites is "Mountains Perched Like Beasts Awaiting the Attack". The concept of that song dawned upon me when GIGAN was on tour and driving through some vast mountain ranges. I wondered what would happen if mountains were actually sentient beings that were here before us and are just lying in wait? I wondered if the rotten attitudes of the human race could generate enough negative energy to re-animate the stone? If so, what would be the end result?

Gigan has a pronounced sci-fi touch. Also, are you a fan of Lovecraft?
Yes, I LOVE H.P. Lovecraft...without him there would be no GIGAN. He is my biggest literary inspiration and was totally unappreciated in his time. I sympathize with his situation...
As far as sci-fi goes... Anything otherworldly may inspire me, science fiction included! 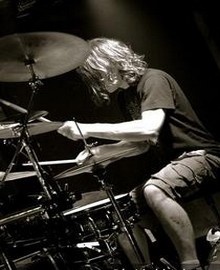 Your most Lovecraft-ian song?
"In the Tentacled Grasp of a Buried Behemoth" is the first part of a series of songs based on HP Lovecraft himself.

What kind of touring plans do you have in support of the record?
GIGAN has always been a touring band and this release is no different!We already have one North American tour booked with Grave/Blood Red Throne and Pathology. That takes place in August/September. Then we tour North America again ;with IMMOLATION, throughout October! More tours are in the works as well. Hopefully, GIGAN will get to come to Europe and the rest of the world soon!!! We appreciate all of our allies and want to meet you all!!!

And Italy?
I have been to Italy both on holiday and on tour...When I was in Diabolic, we played in Italy. GIGAN has not yet, though! :(

What’s your view on the current state of extreme metal and metal in general?
I think both extreme and traditional styles of metal are going through a evolutionary period right now, with bands and labels trying to deal with all the internet theft out there. Hopefully, things will resolve themselves soon, or people are gonna have to start making their own music! In the meantime GIGAN will do what we always do...JAM!!!

Is the heritage of the historical Florida death-metal scene still alive?
Absolutely...there are more bands coming out of Florida than ever before! Some lame ones but some good ones too! Tampa has one of the strongest metal scenes in the country!!!

Any "good" bands?
No, I suggest you take the time and investigate! That is what the Internet  enables us to do! What is good to one is not so good to someone else...Maruta is an awesome band from FL...

How your guitar style is changed through the years?
I am constantly improving from one day to the next...music is like a language and I learn new words everyday! :)

Some of your dizzies guitar progressions (for example, in tracks like "Space Coffin Hallucination", “Mountains Perched Like Beasts Awaiting The Attack” and “Suspended In Cubes Of Torment”) seems to recall Mick Barr (Orthrelm) style...What do you think about it?
Never heard of him. I will have to check that out sometime.

Your favorite guitarists?
I don't have a favorite guitarist, as so many have amazing talents that I appreciate... Some of the more obvious ones are Jimi Hendrix, Eddie Van Halen, Alex Lifeson, Ler LaLonde, Trey Azagthoth, Buckethead, Eric Cutler, Danny Coralles and so many more...

Any band you think is similar to Gigan?
There are bands with similar components; blast beats/double bass/rapid tempos, but there is no band that shares our sound-yet. To be fair, I don't really listen to a lot of new bands, so there could be some I don't know, of course!

How you came in contact with Willowtip?
They found out through our booking agent at the time that we were looking for a new home...Jason Tipton (Willowtip President) contacted me and the rest is history!

Ok, Eric...thanks for your answers and greetings from Italy, greetings from Naples! ;)
Here ya go, man! Thanx again for your support! I hope to see you in Italia soon!!!
Much respect,
-Eric. 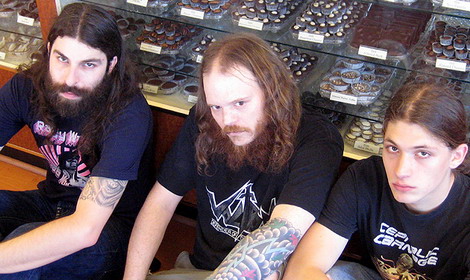 The Order Of The False Eye