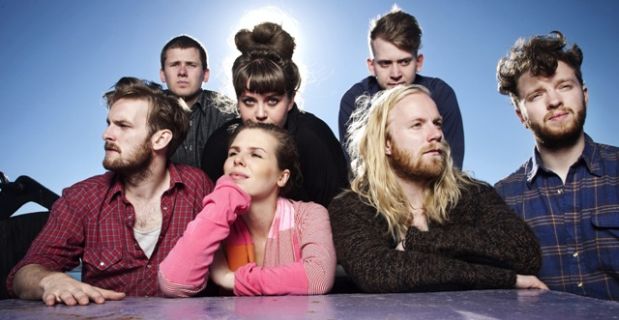 Again talking with some Icelandic guys, that's a great year for your country, isn't it?
Well, I guess so! I don’t know what you are referring to in particular, but, yes, we had a lot of great records coming out, lots of tourists in the summer helping our fragile economy, and a blistering Airwaves festival. What is nice in the musical scene is that the old timers are still staying strong, while we also have some great new acts every year.

But there's a difference between much of your country-mates and you: the use of English in lyrics. What are the reasons behind this decisions?
Yes, there are also a number of artists who use English, some both Icelandic and English, and some only English. But in our case it wasn’t a conscious decision, it just happened along the way. We are all proud of our language and heritage, but the advantage of using English is the fact that it is understood throughout the world, so it can come in handy if you want to release music or play abroad.

So, can you tell us a bit of your story as a band? And also of what each of you was doing before Hjaltalin...
Wow, o.k. I’ll try to make a long story short. We started out in our high school with a songwriting competition. We changed styles and experimented a lot, like it happens with bands at that stage. Then we wrote a hit song on Icelandic radio, and some really nice guys – Benni Hemm Hemm and Gunny Tynes from Múm, produced our first record. We began to tour a bit, and then released our second album, Terminal, in 2009, with symphonic ambitions, that then resulted in a live album, Alpanon, with the Icelandic Symphony Orchestra. After touring quite a bit we began working on our third album, albeit at a slow pace. It was finally released in Iceland, last christmas and now in Europe. Me and Gummi had been friends since we were really young, taught each other to play by ear - not eyes, head or body, (although these all play a part). Then we all met in high school. Viktor and Axel had been in a great band called Búdrýgindi which was already kick ass when they were really young. We met Högni in school, especially in the schools choir, which was at a really high standard due to a very proficient conductor, Þorgerður Ingólfsdóttir. Sigga was also in that choir, and we decided that we wanted a female singer also. Rebekka came in when we went from being a 5 piece to a 9 piece, we wanted a bassoon as a part of the chamber pop sounds, she was playing in some bands, also the bass.

“Enter 4” is your third album and probably the first to bring you beyond Iceland's borders. Could it represent an evolution for you in some ways?
Actually the previous 2 albums also got some attention overseas, and we toured them, but this one has certainly been getting very nice reviews and attention. Musically it’s a huge leap, because it’s totally different from the things we did before. It is more coherent perhaps, then Terminal, which was all over the place (although in an interesting way, I dare say). I think with this album we found a general “sound” that we want to continue pursuing and developing on our next records.

What is the meaning of the title you gave to this new album? Is it just a word trick or does it represent something else, something more?
It represents a lot of things, but 4 refers to the fourth dimension. We don’t want to explain it too much, because it’s a real mystery, but if you want to understand it, you can watch a video on youtube where Carl Sagan explains the fourth dimension.

Can you tell a bit about its birth? What inspired you in creating it?
We hadn’t gotten together for some time, so we decided to make a session in a small town an hours drive from Reykjavík, where we were all alone for many days, playing all day. A lot of the songs came that way, just naturally. We ended up using a lot of the backing tracks from there, because they sounded cool, even though it wasn’t a real studio. Then some time passed and Högni got ill with bipolar disorder. It colored the process for the remainder of the production of the album. The making of the album, and the music itself, became a part of his healing process, so everything became really personal.

More in general, do you have any artistical landmark? Styles, other musicians, or also places and images that inspires you in a particular way?
Yes, but I think it’s different for all of us. We all listen to a wide variety of styles, and that’s a good thing. Like you can listen to and enjoy Cajun music, or Tibetan monk chant, and the stuff you do yourself might be totally different from that. But somewhere it remains, hidden in your self conscience, and somehow, everything you see and hear will make a difference. I think we are also inspired by our travels and the people we meet, both in Iceland and abroad. We might even write songs about them.

About this, something that i often found in Icelandic artists is a very strict and intimate relationship with their country. Is this valid for you too? What is the relationship between Iceland and your music, if it exists?
It’s there, but it’s not as obvious or self conscious as many people believe. We all adore our country, the old Nordic culture, the scenery, the darkness in the winter and complete illumination in the summer. But we are not thinking of it while we are making our music, it’s just a part of us. Actually, I think Icelandic bands are very international in a way, everyone is up to date on what is being released, and what is the sound of today.

How do you usually give life to a song?
Either someone comes with an idea to a rehearsal, or we jam in the studio until we have what might be a song. Then we write lyrics and do overdubs. But it always takes time, to give life to a song, sometimes it happens easily, sometimes it’s a painstaking process. And sometimes it never happens at all. It’s a good observation actually to call it that. A song can be there, but lifeless. And it’s no fixed way to insure that it will be good. You only have to work and work to your best ability and be patient. But then again, it wouldn’t be fun if it were different.

You look more like a little orchestra than like a proper band! How do you manage to divide work between seven different minds?
Musically speaking, I think we are all aware of the fact that we are quite many, so everyone needs to try to do something that will benefit the whole, not only himself. That means sometimes doing something that is very minimal, or in some instances, nothing at all. But when you realize that it is not yourself that matters, but the music, it is a certain liberation. Then you can be satisfied with doing nothing at all, because at that point in time, the other six people are doing something delicate and wondrous, and by playing even one note – you would spoil it. On the practical side, like running the band, we just stay in touch everyday through the internet, and try to meet each other and spend time together between gigs. It can be a challenge, but generally speaking, we delegate tasks to each member, so that we can get work done in an efficient way.

And also about this, how do you usually structure a live performance?
That’s a good question. Normally we try to do a setlist that has a strong beginning and a strong ending, with something in between that makes sense. That sounds really simple, but it can be a real challenge to pull of live. We like to end on a long, dramatic number, but then we might take a tongue-in-cheek encore it we (or the audience) are in a mood for it. Also we don’t like to play it safe all the time, some of us (like myself) have an improvisatory background, so it is allowed to colour the performance in some spontaneous way. But not in a way that distorts the message of the original song or makes fun of it.

Are you going to bring “Enter 4” on stage over Europe?
Yes we are, in winter and spring 2014, and we look forward to it. Stay tuned for tour dates.

Which other projects do you have for the next months?
We have some nice gigs in Iceland over the holidays, and then we are doing a concert in Harpa, the new concert hall in Reykjavík during the easter next year. That is gonna be very, very nice, I think. Then we are also gonna meet in January to work on new material. And then some European dates in early 2014.