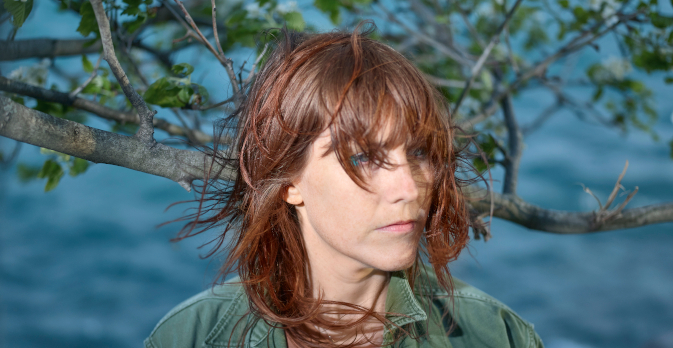 Between meditation and dream

For more than a decade Whitney Johnson has been traversing Chicago's underground music scene. Born as a classical musician, she was soon attracted to punk and psychedelia, collaborating with many rock and psychedelic (Ryley Walker, Bitchin Bajas, Oozing Wound, Circuit Des Yeux) and experimental (Verma, Simulation, Damiana) artists. She has worked with minimalists such as La Monte Young and Marian Zazeela and, in parallel with her music, has embarked on a path of academic and social engagement that has led her to run literacy programmes, work with refugees and take a master's degree in cultural policy and a doctorate in sociology. Her solo project Matchess has come (after the 'Seraphastra' - 'Somnaphoria' - 'Sacracorpa' trilogy released by Trouble In Mind from 2015 to 2018) to a new work titled 'Sonescent', this time released by Chicago-based label Drag City. We caught up with Whitney to have her explain the genesis of her fascinating new work, to understand her compositional dynamics on her solo project and in the numerous projects she takes part in, and to find out more about how meditative processes can have this powerful creative force.

I have always been attracted to the spiritual power of your music. The mental process of somehow moving away from rationalisation and embracing the unknown. The mind wandering away from the cognizable. Does the Vipassana meditation that inspired Sonescent complete this process by finding almost magical sounds from our deepest sensibility inside our bodies?
Absolutely—the teacher of Vipassana meditation, S. N. Goenka, emphasizes that the practice itself isn’t “magical” at all, just the simple process of observing the sensations in your body. But something remarkable happens when you’re feeling the electrical charge of empty space between particles at the atomic level. That kind of sensitivity frees the latent consciousness to be unhinged, creative, and dangerous. Although my mind was focused on bodily sensations, I have a feeling all kinds of wild cognition was happening in the background.

In all your projects (from Via Tania to Verma, from Simulation to the collaboration with Circuit des Yeux), how much has the discipline of the classical musician been useful to you? And how does your approach change from one project to another?
European classical music was the first musical language I learned, and I still rely on it for lots of collaborative projects. It’s a familiar way to communicate, but it’s more useful for some projects than others. Simulation probably relied the least on that language, but Circuit des Yeux has tended heavily in that direction for the string parts. I want to be a musical polyglot, and all these different collaborations are like language immersion in different ways of communicating.

Professor and musician. How do you manage to coexist your social commitment and doctorate in sociology with your being an established musician?
This relationship has changed a lot over the years. I used to think of my life as a sociologist strictly as a day job to support music-making, but the two lives are blending with time. I studied sound art in my doctoral research, and now I’m working on a postdoc at Uppsala University in sound and gender. Those ideas are tumbling around while I’m making music, and what I’ve experienced as a musician is the foundation of writing I do in the other realm.

You are a vision-oriented artist. Listening to Sonescent through headphones at night was like a psychotherapy session; it made scraps of partly lost memories come to the surface, it stimulated and touched me, making me search for hidden inner realities. Was this what you set out to do? To create sounds coming from the slow navigation of your mind inside your body to stimulate the listener's personal meditation?
I think this record works in two ways. One is passive listening, just playing the music while you do other things. In that mode, the subtle music in the background can denaturalize your surroundings in a way that puts you in touch with higher-level thinking. Active listening—like you describe—is the best way to experience this record! For me, that mode opens up a deep, dark vacuum where images, feelings, and materialize. Some of them surprise me, and not all are easy to encounter. I hope that process of revealing is a way for people to experience the hidden reality of their own minds.

What was the composing process for the two long tracks of Sonescent? Were other musicians involved? How was it recorded and which instruments did you use?
This composition process was unlike anything I’ve done before. I started by scoring the songs for the “Purgatory House Band” (PHB: Haley Fohr, Rob Frye, Tim Kinsella, Kalina Malyszko, and Brian J. Sulpizio). The instrumentation was 12-string acoustic guitar, electric guitar, bass guitar, drum set, clarinet, flute, violin, viola, cello, organ, and voice. That process took forever, because I wrote out every detail of a full 36-minute record, one that you can barely hear folded within Sonescent. Well, every detail except the drums; I’m not great at scoring drums on a 5-line staff. I wrote lyrics for the entire PHB album, as well. So, with those scores and MIDI-demos, I brought in the musicians to record at Experimental Sound Studio in Chicago and we did some home overdubs. Brian J. Sulpizio helped me mix that record as if could be released on its own. With those 6 tracks in hand, I made the other record—sine waves, Arp Odyssey synth, no-input electronics, field recordings, etc. That record could also exist on its own, I suppose. Bringing them together was very difficult, and we had to remix the PHB so that bass frequencies weren’t masked. I did the final mixing, combining the two records into one. Mastering was also a challenge, because I didn’t want those PHB songs to get any louder than they were.

The Chicago scene has been extraordinary for many years. From the most ordinary sound to jazz and rock experimentation. You have worked with Cooper Crain, Ryley Walker, Haley Fohr. Do you feel part of the scene? And is the fact that you collaborate more often with female artists coincidental or do you feel there is a special bond between women?
I only collaborate with people who genuinely respect me. Not just respect that I exist as a musician, but people who are actually interested in my musical choices, admire my thinking, share some of my taste, basically think I’m great. And I think they’re great, so that mutual admiration is the foundation of free collaboration. It is very painful to realize that someone you thought genuinely respected you turns out to see you as fundamentally lesser-than, whether that’s based on your gender or anything else.

You rarely go on tour. Do you think you will be able to take Sonescent around the world?
Honestly, I cannot be sure about touring. The actual world situation is not so clear. Anywy tour dates always being added here! https://matchess.tumblr.com/live

Memory played an important role in the construction of the record. Does the viola, which seems to be submerged by the keyboards and drones and then comes to the surface, represent the figures of the mind that are taken from the unconscious and then fade back into memory?
My viola is an appendage of my body, more intimately connected to me than any other body or material object. We breathe the same air and share cellular structure through our daily connection over 20 years. I originally scored the viola as the main melody for PHB, unsure if I would want to sing or not. Some of those melodies stayed in the viola, and others were lifted into the vocal lines. The viola is more deeply connected to my unconscious mind than my own voice.

Your albums as Matchess always have an imaginary title. What does Sonescent mean? And how are the song titles related to your experience during Noble Silence? I am curious especially by the "wall" of "Through The Wall".
Sonescent is a play on words. Senescent means growing old, elderly, or deteriorating, and Sonus is the Latin root for noise or sound. Sonescent records the last minutes in the life of music. You can hear music itself taking a few final breaths within the world of sound. Staring at the wall has become a primary figure in my life and music! While I was starting to write this record, the one-story building next to mine was torn down, and the family living there was displaced by a real estate developer. I watched these greedy gluttons for capital construct a cement wall immediately outside my bedroom window, about a foot away—in order to use all the available square footage for these condominiums. I gazed on that wall for months while composing this record.

The image on the cover reminded me of the handicrafts that were passed down through the generations. What does the cover picture mean in particular?
I wish there were more documentation online of Ike Floor’s glazed ceramics! This piece is a massive work of crocheted clay—maybe 36” in diameter—glazed and fired, and then photographed. I had seen Ike’s work for many years in many different media, and these glazed ceramics blew me away. At their solo exhibition at Happy Gallery in Chicago, we talked about doing something like this together, and Ike graciously created this work. David Sampson photographed it front and back for the front and back of the LP. You can see the wiped glaze on the back side. I can feel something aged in the crochet process, recalling the last days of life, perhaps a senescent sculpture to sympathize with the last minutes in the life of music.