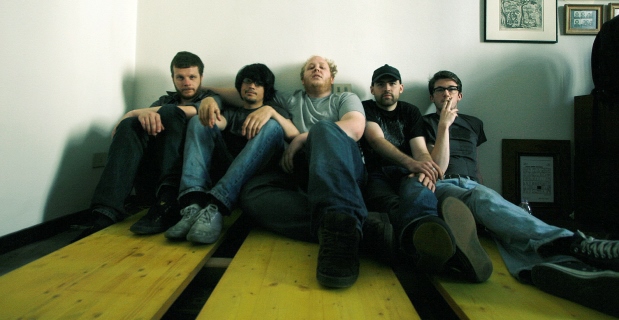 To untie a knot in the throat

There’s not a lot of information on you, so let me ask you first how you all came together. What comes to one’s mind, because of your music and your live performances, is that you must be lifetime friends or something like that…
Maybe half a lifetime. We all came together in our mid-late teen years, meeting via college and/or punk gigs at The Victoria Inn, Derby. Oli was the fastest pop-punk drummer in the west. Jim had a silver sparkle guitar and loved to do palm muted chugging. I don’t think we ever played pop-punk together though.
We all came together probably through an unhealthy obsession with music and a similar outlook on life and creativity. And a mutual love of cheap Polish lager.
Jim, Biff and Beal were in The Little Explorer. Draper was in The Removals. Jim, Beal, Draper and Oli were in The Jesus Years. We all wanted to play together all through these bands (all hovering round each other’s recording sessions) and so when all those things stopped, Crash started.

How does the music you make relate with the music you were listening to as kids?
Probably more ways than we know. But when we write together we get turned on by little ideas, effects or styles. Like your favourite little chord change at the back of a Karate song, or the doing a big 80’s pick scrape before a wailing guitar solo.

I found that, in “Knots”, you have managed to maintain your identity while accessing different musical solutions, taken from different genres. Do you acknowledge this as a direction in your musical evolution?
Yep. There was a big gap between writing "Distal" and writing what became "Knots". In that time you listen to a lot of records, you write a lot of songs, you travel, change, get older.

Do you find “Distal” already impossible to replicate?
No not really. If anything it’s easy. We played those songs so much before we toured or recorded them, then toured them even more. As long as there’s the five of us and we are turned up loud with some energy in our batteries, we’ll be fine.

I have read that you have asked your producer for a “In-Utero-meets-Colour&The-Shape” sound. Why those two albums in particular? Do you think you have reached what you had in mind?
"In Utero" for the drums. "Colour & The Shape" for everything else. They’re great albums that we never tire of, and they’re ambitious records with lots of diversity. I don’t think Knots sounds like either but the idea made us make a big effort.

Do you find the “emo” label as a limitation for you, in the end?
Yes. It feels like college rock, indie rock, punk rock, pop-punk, alt-rock and all those genres of the nineties have been compressed in a bread machine and a sad sagging loaf emerged in the form of one word. A sad sagging loaf to describe a whole swathe of challenging bands that like to rock in their own ways.

Emo is usually identified as an American genre. Can you give us a walkthrough of the English movement, instead?
There were punk bands that did things differently. Like Hooton 3 Car, Cotton Weary, Jayne Doe. Then they became heavier and mathier in Spy Versus Spy and And None of Them Knew They Were Robots and Fine Before You Came (they’re Italian, but I’ll always remember the day they came to the UK!).
That’s a walkthrough for me. It will differ widely for other people depending on how old they were, where they lived, all those things.

I read that the two bass players are basically “something that happened”. How? How do you treat that in studio, while composing and recording?
Like I said in the earlier question, we just wanted to all play together. Beal and Draper play bass very differently from one another. They just work together without getting mixed up.

Your recording history is quite strange, since you recorded your first Lp in Turin, and it was published by an Italian label, Triste. Can you tell us how this all happened?
We did our first ever tour with Fine Before You Came in Italy. Maurizio from Triste had just released ‘sfortuna’ and was touring with them, doing the sound. He liked us, and said “come and record those songs with me, just like you played them on stage”.

You are quite close with an Italian band, Fine Before You Came, since a long time ago. How did you meet?
In Derby at a punk all-dayer. Draper booked them to play. They turned up and played at about 17:30 on a Saturday afternoon. They stayed at my house. My mum made them a banana cake. They stayed in Derby and we did an impromptu show the next day at a little place called Raffles. Word had spread about these bouncy Italian guys, and it was packed, and Draper’s band The Removals played, and The Little Explorer played, and we all got on like brothers from internationally varied mothers.