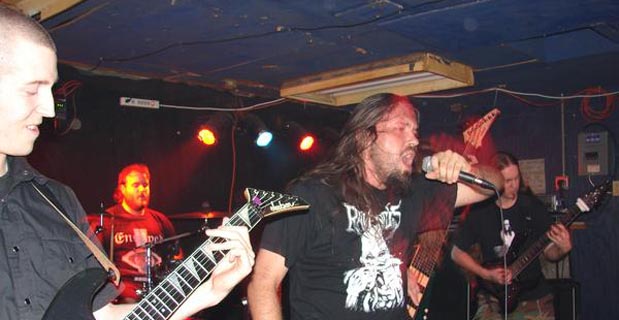 The luster of a death-metal pandemonium

An interview with Crimson Massacre. In 2005, this texan band recorded the astonishing The Luster Of Pandemonium, a little jewel of insane tech-death.

Tell me about the early days of Crimson Massacre
Pete Olen: I wasn’t involved with the band at their inception. Their original singer (I forget his name) was pretty inadequate. Basically, my other band (Dark Faith) was on tour and Crimson Massacre opened for us in New Orleans. The guys were starting to put together the initial pieces for The Luster of Pandemonium and were looking for a singer that fit the record. We talked about various concepts behind the album, and they ended up flying me out to Texas for practice and to record the album.
James Jackson: The 2002-2006 era was a shotgun blast of personnel changes with a reasonably drastic stylistic change in, what I thought, was a short amount of time. I enjoyed the ride at the time and have no regrets coming to mind.
Scott Horne: Pre The Luster of Pandemonium, we existed as a blackened death group searching for its sound. After a mutually beneficial schism with the other members, James and I went on to begin writing the songs for Crimson Massacre 2.0. 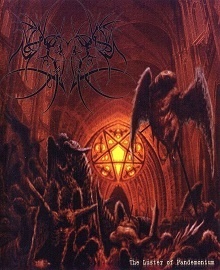 Which are your most important musical influences?
P.O.: This is one of those things that changes over the years, but at the time (we’re talking 2004-2005), I was listening to a lot of Blasphemy, Conqueror, Angelcorpse, etc... I think you can see some of that influence come through in my vocals on Luster. I’ll leave this question more to James, but I imagine the influences behind The Luster... are not what most people would expect.  We weren’t sitting around listening to specifically technical music nor were we interested in writing a particularly technical record... it just ended up being “technical”. I imagine we were more influenced by bands like Discordance Axis than anything technical. I can’t stand bands like Necrophagist, etc...
J.J.: If you’re looking for styles then and now, without specific artists, I would say: classical (baroque, impressionist, romantic), some jazz (not much), the sludgier yet aggressive side of metal, some early 70’s prog… listing anything else might make me sound pretentious if I don’t already.
S.H.: At the time of this album, I was influenced by Angel Corpse, Discordance Axis, Watain, Deathspell Omega, Antaeus, John Milton, Wayne Barlowe, Gustave Doré and Mary Shelly.

What do you remember of The Luster Of Pandemonium era?
P.O.:It was a pretty busy time.  The album seemed to get a lot of attention right off the bat, but we didn’t really have much label support. We did some co-headlining festival shows in the U.S. and various shows in Texas and Florida. We were offered a U.S. tour with Demilich, but ended up turning it down due to lack of interest on our part. We really wanted to push the band as much as we could, but there didn’t seem to be a lot of interest in having us tour, etc...we eventually just started working on the next record (which remains unfinished and unreleased).  We had some interest/offers from “bigger” labels, but that’s not really what we were interested in doing.  The goal was never to tour all of the time.  We wanted to put out a record like Luster, we did, and we considered that a success in and of itself. Whether or not other people were interested in it... well, it was (and is) kind of irrelevant for us.
J.J.: Writing the album, with the subsequent work-up to the recording, was a blast. Most of the album was written late 03/early 04, and recorded that fall. I think the cycle of random shows in weird locations kept us well focused while writing the material.
S.H.: The Luster era was exciting. A few shows, 1 or 2 tours, and an album that represented ourselves at that point in time. We sacrificed much to accomplish what we did.

What do you think, now, of that album?
P.O.: I think the album stands up fairly well.  There isn’t anything I would change, etc... I wish we had more opportunities to tour Europe, but we weren’t that interested in touring a ton.  We talked to Bill Taylor from Immolation about doing some stuff with us...either live or on the next album, but it never really materialized. I think his contribution could have been pretty amazing. For me, the album was a bit ahead of its time. It fits well, again... to me, with bands like Deahtspell Omega and Portal.
J.J.: It’s not what I would create now, which I think is a fair statement for anyone looking back at their work 9-10 years prior. That said, I think we created what we intended, free of distraction, and in a parallel world would have done the exact same thing.
S.H.: I haven’t listened to the album in a few years actually! This interview made me dig it out of my cd collection. Often times, stepping away from a creation allows it to develop/rot/ferment organically. I am both surprised and honored that it still gets attention. 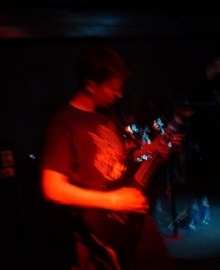 Tell me something about each track of The Luster Of Pandemonium.
P.O.: I can’t really break the album down track by track. The whole record was composed as one “piece”, so there isn’t much to say about one song.  Overall, the idea was to have a kind of controlled chaos that sounds like it’s about to fall apart at any moment, but is always kept together.  The one instrumental track (purposefully placed in the middle of the album) is supposed to be a kind of respite from that.
J.J.: Nothing sticks out per track that I wouldn’t associate to the whole album. Maybe that’s a bad thing?
S.H.: "Catalyst Tongue" – When writing this song, it provided an excellent opportunity to anchor and solidify previous ideas/lyrics written for the album. This allowed more of a tangible look at what the text was trying to convey and thus became an origin point of the theme’s overall narrative.
"Conquest" – One of our more frantic songs, and the first song CM 2.0 wrote.
"The Devourer" – This song again provided lyrical inspiration, harmony is consumed by dissonance.
"Epoch" – The second song CM wrote. I feel we were still feeling out our sound, at times a bit to saccharine, but with hints of bleakness.
"The Hyperborean’s Epitaph" – the aural equivalent of an opiate laced palate cleanser
"Redemption" – One of the songs CM 2.0 composed on our demo before recording this album. This really hit the mark with what we were trying to express and convey.
"The Luster of Pandemonium" – When composing lyrics for this track, again it provided a focal point with the overall theme but it was still opaque at this point.
"Sacrifice" – Another earlier CM 2.0 song, order slowly percolating towards the surface only to be dashed by the cacophonic.
"Of Perverted Hope and Fragmented Suffering" –There is something ashen and insipid with the introduction, which slowly morphs to hopelessness as the song ends.

James, let's talk about your guitar work on The Luster Of Pandemonium...
Same as the above, though I will say some of the compositions could have been served better at a different tempo.

Pete, let's talk about your style of singing...
There was a conscious effort to have the vocals fit with music... more of an effort to see the vocals as just one more instrument in the overall music (instead of just putting them on top of everything else... like most other death metal bands).  I think we accomplished this.

Which vocalist did inspire you?
I wouldn’t say I was particularly inspired by any vocalist.  We had a general idea that we wanted vocals similar to Angelcorpse or Blasphemy, as we thought it fit well with the theme of the album... so I guess you could say I was inspired by Pete Helmkamp’s vocals on some of the earlier Angelcorpse records.

Scott, your drumming is very sharp...
I am fascinated by anything executed at its highest level. Anything pushed to its, at times, uncomfortable limits, will yield results regardless of the discipline. I attempted to take on this mentality when practicing and writing. 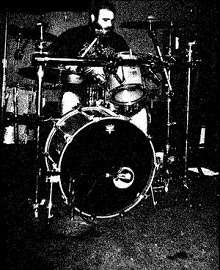 Musically speaking, what have you done after the end of Crimson Massacre experience?
P.O.: I’ve basically been busy with two different things: my other band, Dark Faith, and working on the business side of the industry. Dark Faith called it quits a couple of years ago, but we’re actually doing a one-off reunion show this December. I book and promote shows throughout Florida (which I’ve been doing for years), and also run a yearly festival in Tampa called Southern Darkness Fest.
J.J.: I've kept playing.
S.H.: Not much. Although I do miss the act of musical creation.

What's your idea about the death-metal scene of the last years?
P.O.: There are some really great bands coming out – King Parrot from Australia, for example, are a great band doing something slightly different for their live shows. Honestly, I just keep an eye out for bands that are trying to do something different. I wouldn't say I primarily listen to just death metal, so I don’t pay particular attention to death metal bands. I’m more likely to check out black metal/grind shows when I have free time.
J.J.: I stopped paying attention to that specific scene, in depth, after 2007. I don't say that out of disdain, but some tastes changes.
S.H.: I am impressed with Deathspell Omega's and Mgła's recent works.

What is the metal scene like in Texas?
P.O.: Since I live in Florida, I have no idea.
J.J.: I live in Nevada now. How is that scene in TX these days?
S.H.: I currently live in Seattle, so I cannot comment on the current Texas metal scene. When I lived there, Averse Sefira, Bahimiron, and Insect Warfare were excellent bands. They understood what makes Metal good as compared to what makes it popular.

J.J.: I wouldn't want to run the risk of ruining the listening experience of any album I like by having an abnormal level of repeated listens. 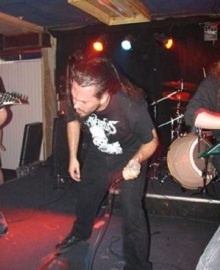 Future projects?
P.O.: Nothing is on the horizon right now. James and I have talked about doing a new band, but I imagine the demos for it won’t be done until August or later.
S.H.: Nothing on the horizon.

At The Gates
Malattia terminale dell'anima