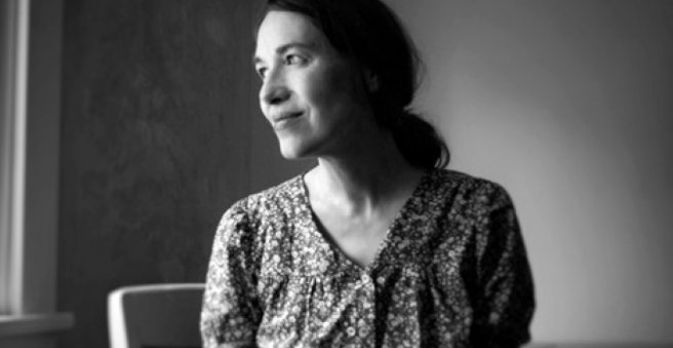 The secret joys of the everyday life

Hello Karen, how are you? First of all, congratulations for your new solo record A Song is Way Above the Lawn! Are you happy for it to be finally out?

Hello! It’s nice to meet you here. Thank you - yes, it has been nice to be able to release the album. There was a bit of time between finishing it and the release day, but that was okay because it gave me some time to draw animated videos for a couple of the songs. And I become equally immersed in that process and really enjoy it.

The writing process of A Song is Way Above the Lawn was relatively long: I read that some songs date back to even seven years ago. What prompted you to release them now?

I think I am just slow to gather enough songs that stay around and seem like they really belonged to this album. I write every day but most of the things don’t stay long enough to get recorded.

How does this second solo record differ from its predecessor? Did you work in a similar way? For example, what stands out from the first listen is the absence of instrumental tracks, which I think were instead a central part in Violet…

The atmosphere of the piano joins both albums together, but with Violet I leaned toward the love I have for certain albums of solo piano, albums by other people, and the album just grew in that way - I just wanted to try that, and I became immersed in trying to communicate something only through the piano. It can be a relief to dispense with words, sometimes. :)

How do you differentiate lyrics for a solo album from those you write for the Innocence Mission? What do you think makes these new ten tracks ‘uniquely Karen Peris’?

This was a particular kind of album, in my mind, like a particular world to enter, and it seems right for an album to have its own atmosphere, because I love that quality in favorite albums by other people. And the piano takes up a lot of space and makes its own atmosphere and doesn’t leave as much room for other instruments. So I try not to put too many piano songs on a band album, one or two.  But I think there was a larger freedom to write these songs on the Lawn album, because they started to be connected together by a sense of wonder, just the wonder of being alive, and large feelings that we often feel in the smallest moments of a day, and then the feeling of wanting to express these big, inexpressible things. And there is joy in that urge, even if we feel unable to come up with the right words or the right colors to capture or articulate something that’s important to us. So, the subject matter felt endless, this boundless territory, because I wanted to try to write about childhood experience, too, and to not have much of a border between those countries of childhood and adulthood. And if a child would listen to the songs, I wanted to try as much as possible to make something for that child, and maybe it could contain some visual quality of reading aloud. I liked doing the illustrations and I became really involved in doing those for a time.

On my three favorites songs on A Song is Way Above the Lawn, your son Drew and your daughter Anna play respectively violin and viola. How do the collaborations with them usually begin? Do you and Don often play music with them?

I loved their presence in those songs, and it seemed very right for them to be in this album, since it’s partly an extension of our years of reading aloud together, going for walks and talking about the names of trees and birds, and drawing together.. where the inner world of the imagination was so vivid and beautiful. Both Anna and Drew have keen ears and timing, so that the recording was as simple as singing the parts to them once, hitting record and .. it was over too quickly! To have a real string section on those three songs is so wonderful, but even more so because those songs were made partly in reference to things that I could imagine us daydreaming about together. In the case of Superhero, it is a love song for them, really, and for Don, to praise kindness as the essential quality.

I read that an NPR interview with an elephant researcher inspired you to write the beautiful piece I Would Sing Along. What did you find so fascinating about this interview? How did you deal with it in your music?

She was a really endearing, joyful, elderly scientist, an acoustic biologist, who had done a lot of groundbreaking research into whale song, when she began to study elephants and found that in the company of elephants, if she listened very closely, she was hearing these low, almost subsonic sounds akin to singing. And I found over the next few days that I was writing about this idea of attentiveness, of listening for something that is just out of one’s hearing. I think I also liked thinking about the role of the quiet listener in a noisy world. It’s important somehow for me to be able to see a song, and with this song, one of the images is of someone listening from an apartment high up in a city, in a pink evening hour, and listening out for something beautiful, and maybe wishing to hear an elephant singing. There is a solitude about it, but I don’t think it’s sad. It’s more a feeling of possibility and thinking about the mysterious beauty of the world.

In the delicate This is a Song in Wintertime you sing about standing in the movie line in front of a cinema. I really like how you turn a usually not so thrilling moment into an experience that can connect those who share it with one another. Could you tell us more about this song?

I didn’t experience this exact moment but there are moments like it in my memory. I think it has happened especially when we are away from home, and all the people we see are fellow travelers, but also it could be at a grocery store, or any place, and strangers just start talking to each other, and it makes me feel really happy when that happens. Also about this song: one of my favorite albums is Vince Guaraldi’s A Charlie Brown Christmas, and so I think that piano just naturally can connect with snow and winter time in my mind.

Your poetry gives special attention to the little things, to the everyday life, to secret and sudden joys. Do you take inspiration from your personal experience, or do you rather try to distance yourself from your life while writing?

I like your phrase ‘to secret and sudden joys’. Yes, there is so much to want to respond to in every moment and every aspect, almost, of our lives, isn’t there?  I always feel so grateful for music, and for poems, to provide some ways to try to communicate the inexpressible, and to help me think through the mysteries of being alive. The songs are not removed from me, I feel close to them, but they’re also not like diary entries, because the impact that poetry has had on me as a reader has to do also with the space around each word, and the visual quality that can come with fewer words, rather than more words. So that two words put together can be like a little movie projector. How is that? And loving the mystery of that, I try to repeat that effect on myself when I write something, and I’m always hoping it will contain a connection that someone else will find to be familiar or meaningful to them.

I think it is not too late to talk about your last Innocence Mission’s record See You Tomorrow, which was released in January 2020. What was special and unique for you in the writing and recording process of this album?

See You Tomorrow has a lot to do with communication, the desire to join in a conversation, even if the conversation itself is sometimes about being at a loss for words.  And then it is about the changes that can occur in the life of a family, the difficulty of change and the looming future. I feel especially close to that album. Music and poems became even more essential to me during the time of writing it, and I felt a lot of joy in working on the arrangements and recording them.

Could you tell us some insight details on The Brothers Williams Said and On Your Side? I really love those songs…

Oh, I’m glad. The Brothers Williams talks about the sense of misunderstanding or labelling that can happen sometimes to people who have a quiet nature, especially in school. So there is some sadness in that, but repeating the words “see you tomorrow”, made it feel hopeful to me, to suggest that conversations could always go better the next time, and maybe as a phrase, on it’s own, it suggests for me a whole world of better possibilities. And On Your Side, is in part for my mom, who isn’t here anymore, and who I miss every day, and the thought of her still being with me, and also this song is the wanting to assure my dear ones here of the same kind of constant love, but also to say to anyone listening, life is sometimes difficult, and I can feel like I don’t know what I’m doing, and I can have a lot of anxiety. Does that sound familiar to anyone else? and my heart goes out to everyone.

Thank you so much for this interview. We are always happy to hear your new songs. Take care and see you soon!

A Song Is Way Above The Lawn