Whilst being one who likes to keep a low profile, Mat Brooke, leader of the Grand Archives, is definitely a close-up character in today's scene in Seattle. After fifteen years of experience at the highest level, he represents an elder brother, a wise and shadowy figure, one to look up to with regard. His music, since Carissa's Weird's times, passing through the brief Band Of Horses' experience, where he left an indelible mark, consolidated in the last few years with all its contradictions. There we find chiaroscuros which overlook to the deepest sorrow on one side and the most genuine lightheartedness on the other - formal sobriety alternates with intensity and power. Mat Brooke greets us just before his Milan concert, which will later take place in spite of the voice problems that forced him to cancel the previous Barcelona date.

Let's start with a simple question. "Keep In Mind Frankenstein" [the title of the new record, Ed.]: is it just a reference to the different souls which inhabit your record or is there something more you want to tell us?
No... It became a kind of "inside joke" when we were in the studio, about the idea, the concept of Igor building a song and just putting different parts together. Whatever it ends up being... That's what it is: just a silly joke.

I read that you went to Index, in the mountains near Seattle, to record and that you have a lot of nice stories about those days, like composing songs in the middle of the night with a ukulele, visiting haunted places, building strange instruments by yourself... Do you have a story to tell us?
It's nice, you know, when you're trying to make a record, to get out of the city, up in the mountains. We take BB guns, shoot beer cans and have fun like that... Barbecue, every night. Some night we stay up recording until the sun comes up. There's no interference from the outer world. If we want to stay up until the sun comes up we can, because we don't have to go to work. A full month off, just focus on the record.

About your work: I wanted to ask you about your Redwood bar in Seattle. It seems to me that it's something more than an occupation... At least, it sounds a bit strange to me that a musician would stop making music and put up a bar. Am I wrong?
No, the only two talents I have are playing music and bartending. There was a location, right near where I live, it was for rent and I thought it was the perfect time. I had a couple of other friends and we decided to go in together and open up a bar. Nothing fancy but, yeah, I like it a lot. It's definitely one of my favorite things.

I also read you had some problems with the neighborhood, about the noise... It usually happens, I guess.
It does... It took about a year, but now we're friends, the neighbors and us. They come to the bar.

They no more try to shoot people on the street... Coming back to your record, I think you changed your sound a bit. Maybe you came back to the earlier part of your career but, also, maybe you defined something which is closer to what you have in mind for Grand Archives?
We didn't really go into the studio "intending" to make a sound. We recorded a whole lot of stuff, probably 20 songs. A lot of them were upbeat, a lot of them were kind of mellow. It was in the middle of the winter: at that time the mellow ones sounded better to us. So we went to the label, played them everything and they said: "We like the mellow ones". So our first record was a lot poppier. 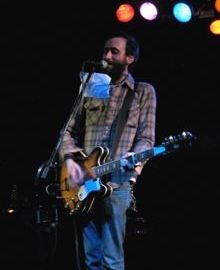 It was recorded in summer... A "seasonal" thing [laughs a bit and confirms, Ed.]. Your first record was full with characters, with particular stories. Like Louis Riel, a Canadian pioneer, George Kaminski, a prisoner and four leaf clover collector... The main character of your new record seems to be Topsy [appearing in the first song, "Topsy's Revenge", Ed.]. I guess he is quite popular in the US, it's a famous story, while in Italy it is not, to my knowledge. Do you want to tell us the story?
Yeah, it's a horrifying story. Back in New York, Coney Island, like a big carnival. They had these elephants that were mistreated. One day, the trainer put the cigarette out on the elephant's tongue, so I guess the elephant had had enough, so he stomped on him. The trainer died and so they decided they had to kill the elephant. They tried to hang him, but that didn't work. They tried to drug him, but that didn't work. And then Thomas Edison showed up and so they electrocuted him. That's kind of the basis of that song.

When does his "revenge" happen?
A few days later. Mysteriously, something knocked over an oil can, and a bunch of things burned down. So, a lot of people like to think that it was "Topsy's Revenge".

The other character that we have is the "Oslo Novelist"? Who is him?
I don't know [laughs, Ed.]. Completely fictional. I wish it was about something, but it's free association.

I noticed on your Myspace page that you are listed as a "Grunge/grunge/grunge" band [laughs, Ed.]. Is that for real, meaning you belong to Seattle and so on, or is it provocative?
No, no, that's just some kind of Seattle joke. Seattle, obviously, for many years had to live under the shadow of grunge, so now we can look at it with a little bit of sarcasm.

Speaking of the Seattle scene, you've been playing there for a few years. So, what do you think of Seattle, what is it today, in music? Do you follow the bands, is there something moving, again? From your "position", I mean...
When you're actually immersed in living in Seattle, it seems there is always something moving. There's a whole bunch of record labels, a whole bunch of night clubs. It always seems to be a dozen new bands, every week. Occasionally, they make it out of Seattle and other places there, but it's hard to keep track of who's doing well and who's not.

Who is doing well, in your opinion?
Oh, it's tough to tell.

Well, can I say a name?
I imagine you would say the "Fleet Foxes". They're doing pretty well, yeah. Those guys work hard and I think they're doing really well, so... That's cool.

I think all of your records, throughout the years, have a strong songwriting "push". Have you ever thought of picking up the guitar and going solo?
Ahh... I don't think it'd be very much fun. It's more fun to have your friends on stage and writing with a collaboration. It seems that, doing it alone, it would become... Boring.

Well, I have a tough question. Have you given yourself an explanation why Carissa's Wierd never really took off, in the musical scene? Was it just bad luck? Because I think those records are exceptional, and chaos seems to me the only possible answer. What do you think? What was your feeling at the time?
We were young. We probably self-sabotaged ourselves a lot. At a point, some labels were showing interest, but we had "young" ethics. So we probably shot ourselves in the foot every chance we got. It was, still, a great time. Everybody who was in that band has gone off to do something else, musically. By the way, the records are all being reissued.

That's what I was going to ask you [with my throat gripped, Ed.].
Yeah. A record label called "Hardly Art", which is a subsidiary of SubPop, is reissuing all the Carissa's Wierd stuff, this year.

That's wonderful, because they are very difficult to find. About the fruits that the old  Carissa members are taking from that experience: you all collaborate. Jenn is here [her project, S., supports Grand Archives in this tour,Ed.], you started Band Of Horses, Sera Cahoone appears in your records and viceversa. I see you as a bigger but still connected entity. Is that so?
Yeah, definitely. With the exception of Ben [Bridwell, frontman of Band Of Horses, Ed.], everybody still lives in Seattle. We all see each other probably two or three times a week. Seattle's a pretty small town, in the music community. Every time someone from Carissa's Weird has a new project or is in the recording studio, we generally call each other to come in and collaborate. So it's nice. Seattle's always been a pretty good home to us.

Will you play any of the older songs tonight?
From Carissa's Weird? I don't know, we'll see if we have time. Actually, when the records get the first re-release, the first is released in June, we're going to do a reunion show in Seattle. That'll be the first time [after the split, Ed.] everybody gets on stage and does it all together [Jenn will later confess that there could possibly a proper tour, following that single show, Ed.].

OK, I think that's it. Thank you so much and have a nice show.
Oh, thank you. 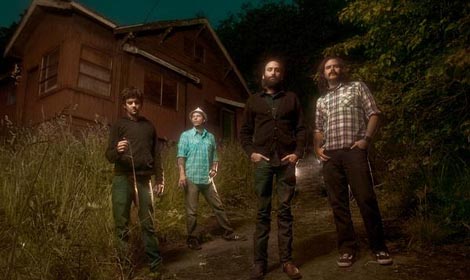