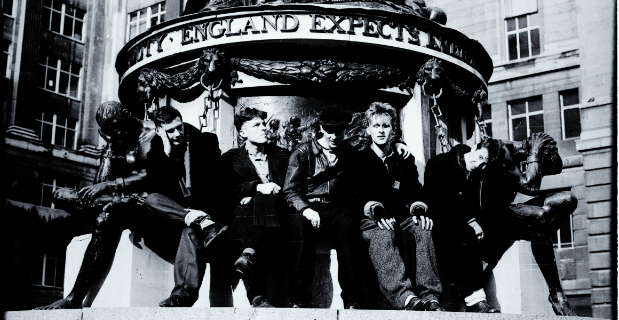 interview by Mattia Villa, Luca Pasi
Tweet
The release of "Scared To Get Happy - A Story Of Indie-pop 1980-1989" gives us the opportunity to interview the author of the song that opens this exhaustive compilation: Paul Simpson, the mastermind behind The Wild Swans. Protagonist of the entire decade under examination, Simpson has recently revived The Wild Swans, releasing new material in 2011. He speaks openly about those years of musical and cultural changes and also about his future projects.

Hi Paul, thanks for agreeing to answer our questions. With a song by your Wild Swans, you have the privilege and the burden to open one of the best indiepop compilation ever: “Scared to Get Happy”. Do you feel a bit of pressure?

Paul: No, I don’t feel any pressure, just surprise because “The Revolutionary Spirit” is very untypical of most of the material on Scared To Get Happy. Its certainly ‘indi’ but its hardly ‘pop’, but along with a few other early 80s tracks like “Dumb Magician” by The Blue Orchids, I think it illustrates a bridge between the more ‘serious’ post-punk bands and the poppier, janglier scene it morphed into.

The track we were talking about is "The Revolutionary Spirit". Can we say that The Wild Swans were born with this song? Listening to it today, is there any special memory that comes up to your mind?
Yes, “The Revolutionary Spirit” defines The Wild Swans. My main memory of the time is of being penniless and cold but it not caring as I was in a band with my best friends and we were on a mission.

"The Revolutionary Spirit" came out in 1982, the first album of The Wild Swans came out in 1988.  We can say that you have fully lived throughout the decade. What was the atmosphere like in those days? Did you realize that you were building something important?
The political climate in Britain in 1982 was very similar to the present one, the country was in a recession and Britain’s government was completely out of touch with the people and dealing with civil unrest with a very heavy hand. We lived every moment as if it were being filmed. I don’t think you really see what value your work has until at least a decade afterwards. You need that distance to be objective.

Besides the music, what is the meaning of indie-pop and what does it represent to you? Do you agree with this old definition: "Indie-pop is girlie. Always has been. Even the boys. Especially the boys."?
Again, I cannot speak for anyone else involved in this project, but for me, what you call ‘Indi-Pop’ was simply a natural reaction to post-punk; when a slightly younger crowd of musicians found the nihilism of punk and the uber-serious and exploratory tone of post-punk too constricting to express their youth and exuberance.

What does this compilation stand for and what's the meaning behind its name, in your opinion?
I think Scared To Get Happy represents an attitude, a belief in ideas and enthusiasm over playing ability and is an attempt to define and prolong the indi-aesthetic. My interpretation of the title is that much the music on the CDs was made as a natural reaction against the slightly earnest, po-faced, post-punk aesthetic. There’s a nice frisson between the words Scared and Happy. Almost polar opposites but put together they create a third meaning.

Did indi-pop express, in general, a political view? If so, what has changed with the indie-pop of '00? In the 80s was it working-class or middle-class?
Some bands sang songs reflecting the turbulent times, some didn’t. Some bands were working-class, some weren’t. The most potent music of any genre often contains references to struggle or overcoming struggle but its not a pre-requisite, there’s also something beautiful in the sound of positive exuberance.

What do you think were the reasons for creating the C86 compilation, compared to earlier tapes such as C81? Was there a ‘C-86 sound’ in the beginning? Was there one in the end? What's your definition of C86 today and what's the link between C86 and indie-pop.
Not being part of C86 I am not really qualified to comment but looking back there was far more of a political slant to the songs on C81. The songs on C86 are both lighter musically and lyrically. Seems like the further we get away from 1976 the more diluted the d.i.y message becomes. By the end of the 80’s the underground had started to become corrupted by the ‘music business’ and the counterculture was being ‘managed’. Grunge and Madchester and Britpop were Major label funded and MTV sponsored. And now we have boybands and soul divas and R&B superstars headlining summer festivals and teen TV presenters wearing MC5 and Ramones T-shirts without ever having heard those bands. Because of the internet and I-Tunes and Spotify, music has lost much of its currency. If no effort is involved in discovering the lost bands and in finding the rare records, if they are just a mouse click away, they’ll never be listened to or valued as treasures.

Let's talk about your band: the first keyboardist of Wild Swans, Rolo McGinty, founded the Woodentops later, which are also in the compilation.Do you think this collection will fully represent such a meaningful decade? What is the most important legacy left behind by these bands?
Rolo was our bass player (not piano player) and only for about 11 months. The Woodentops came as a wonderful surprise, I loved the positivity and freshness to their sound. A raw and back to basics blueprint but with a refreshing lightness of spirit. I cannot say whether the STGH box set accurately represents the decade or not because, like the period 1960 to 1969, more than ten years worth of cultural and musical change occurred within it, but it’s an interesting and affordable sampler of bands who shared a similar aesthetic particularly for younger listeners who may never otherwise have discovered many these bands.

The first period of the Wild Swans is summed up by several collections; in my opinion, the influence of post-punk was still very strong. What can you tell us of those early years? I have read that you shared house with Pete de Freitas of Echo & the Bunnymen (who also produced "Revolutionary Spirit"). What was the music scene in Liverpool?
Pete and I shared the top floor of a Victorian house about half a mile from the city centre. It is absolutely not the case, but as far as The Wild Swans and our friends Echo and The Bunnymen were concerned, we were only the only bands in Liverpool doing anything important at the time. The song The Coldest Winter For A Hundred Years documents this period far better than I can in a couple of sentences.

Is it true that you felt like you had lost the urgency of the beginnings when you recorded "Bringing Home The Ashes" in 1988?  It seems to me a really good record.
No, I’m not a fan of BHTA at all. It was a colossal wasted opportunity. I like the two early Radio One sessions and the last album from 2011 but the middle period and that album in particular leaves me a little cold. It sounds unmagical, like a band that has been subjected to interferrence from outsiders with rather than a band left alone left to do what they do best. Tight budgets and time constraints make for better art.

In the Nineties, Wild Swans were on standby and you have pursued other projects, including Skyray. I admit that I don't know much about these songs; from what I've read and heard, it seems that you rarely sang and there were mainly instrumental tracks. I struggle to think about an album recorded by you, in which I can’t hear your voice. Can you tell us something about Skyray?
After the Wild Swans fragmented again in 1989, I still wanted to create music but I had absolutely no desire to sing. I was psychically wounded and needed a long, slow period of recuperation. Because there are no vocals on Skyray tracks there is nothing to root it to consensus reality and any time period and that’s why I like it so much. It has a purity about it I rarely reach with The Wild Swans. The Swans was always classical, romantic and symbolist in style where Skyray was abstract expressionism.

In the last decade, a couple of reissues and retrospectives of The Wild Swans came out, until you released the new record "The Coldest Winter For A Hundred Years" in 2011. I have read that you consider "The Coldest Winter For A Hundred Years" the best work realized by Wild Swans and I can only agree with you. Ironically, I think this is the most pop record branded by Wild Swans. How came back the desire to go back to being a wild swan?
I formed and named the band in 1980 and since 1988 I have been the only constant, so in effect I am the Wild Swans. I suppose it was just unfinished business. Being an anomaly in the band’s canon, I wasn’t happy with Space Flower (now that is a pop record!) being the last WS statement so I wanted to go back to the original sonic blueprint for the band but also bring in a more free and chaotic element to better reflect the times.

Is there any plan for the future of The Wild Swans that can be revealed?
I caught a tropical virus while in Sri Lanka last year that has damaged my lungs, possibly permanently, so for now at least I have no plans to play live, but I am thinking about doing another Wild Swans album. Something different though because I don’t want to make The Coldest Winter part 2. I’m seeking a new sonic palette and a less earthbound approach to recording.

Have you ever been scared to get happy?
With very a few exceptions ‘happy’ rarely makes great art. Unhappy does, so yes, I’m terrified of getting happy. Thankfully happiness has never been a problem for me. The last time I was really happy was at the age of 3 after visiting Santa in a Christmas grotto and being given a gold plastic dagger with 3 brightly coloured ‘jewels’ in the handle