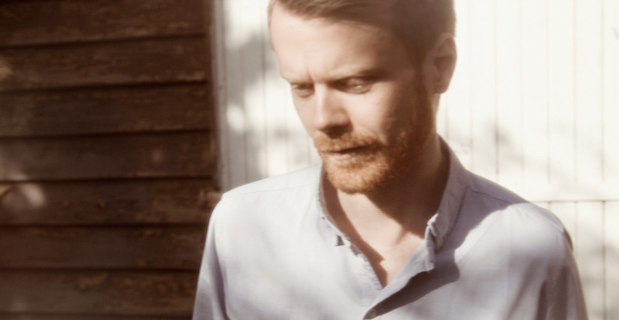 interview by Lorenzo Righetto, Luca Pasi
Tweet
You said in an interview that you wanted to write indie-pop music, but taking from different styles of other decades to distance yourself from the clichés of the genre. You’ve always written great pop songs, but would you agree that your last record sounds closer than the others to this idea?
Yes, indeed! I think the last record is the one where I've succeeded the most with bringing in influences from all the music I listened to since I started being interested in music. It was made during a period in my life where I was feeling a lot of nostalgia, and that drove me towards a sound where I tried to also incorporate elements from music that I don't necessarily listen to today, but still feels like an important part of my life.

Why did you choose this record, even though it is your third, with the name of your project? And why did you decide to release under the american Shelflife? It seems that there's a real connection between Shelflife and Norwegian acts (i'm thinking about Burning Hearts too).
It's a very personal record, written and recorded during a time where I experiensed some life-changing events: I lost my mother in cancer, and my daughter was born. The lyrics refletct that, and it didn't feel natural to put a title that would describe them as a whole, other than Dylan Mondegreen.
I like labels with well-defined aestethics, and I wanted to release the record in America. I thought Shelflife and this record would be a perfect fit, so they were one of very few I sent the CD to. They responded very quickly, and said they wanted to release it. I liked their enthusiasm, and they seemed very reliable. They are lovely to work with.

While being coherent with the rest of your releases, your new record sounds like a step forward in terms of production and arrangements. Can you tell us a bit about the recording and production process, about the people who contributed to it, etc.? For this new record, how did you get in touch with Ian Catt and how did he influence your sound? His latest remix of "Keeper of Secrets" is pretty good!
Yes, it's the first time I've had a real producer, not just a co-producer. Although, pretty much was sketched by me on the demos, Ian contributions made the songs more interesting and dynamic.
I recorded the basic tracks in a studio outside of Oslo, together with Rune Berg, a long-time friend and very good songwriter and musician. Then I went to Ian's studio in Couldson, outside of London, to do some additional recordings, editing and mixing. I also mastered the album in London, with help from Guy Davie, who has worked on many great records.
I got in contact with Ian after my first record, which he liked. I wanted to do something different on this record, and to seek further towards my indie roots. I thought Ian would fit that idea well. And I think he did.

“Dylan Mondegreen” deals also with “adult themes”, like fatherhood and married life in general, and sometimes that drives the record musically, too. Aren’t you afraid that this might alienate some of your audience? Indie-pop is often connected to an idea of freshness and, sometimes, to more teenager-felt themes…
That's correct. Not really. I need to write about what feels important and honest to me at present time. It might not be something every twenty-something indie fan can relate to or appreciate, but I'm sure they can find other bands to relate to.

Maybe we also mistake who your audience is, at least in your country. Is Dylan Mondegreen an independent project – which in our Italian standards means that it will hardly get national radio play and be confined to a limited audience of young people – or really a popular, all-age, what we would call a “mainstream” act in Norwegian?
No, the Norwegian audience is limited, but not to young people. I had some major radio play on my first record and the record may be reviewed in the biggest papers, but it doesn't sell much. I don't really look at the Norwegian market as more important than other countries, but to be honest, I feel my musical project is a bit underrated in my home country, although the latest album received lots of great reviews.

Your sophomore "The World Spins On" is opened by "(Come With Me To) Albuquerque)" a real tribute to Paddy McAloon in which you even quote its solo-album of 2003 "I Trawl the Megahertz". Can you tell us the story that goes behind this song? Do you know him in person?
I've liked Prefab Sprout for many years, but they've never been a huge influence on my songwriting. It seemed however, people started to compare my music to theirs, and since that I've listened to them more than before. Paddy's story is quite touching, I think. He's been struggling with health issues. I wanted to write a song to honour him. It was quite a coincidence he released his "new record" the week after mine.
I don't know him in person. I do know he got my record from a German journalist, and that he was flattered by the song I wrote about him.

What is your point of view on the Scandinavian pop scene? From the outside it’s quite surprising that there are so many artists sharing musical roots (Smiths or indie-pop in general) or sometimes the mood (for instance, while musically distant, sometimes you remind me of Kings of Convenience). Do you think this is just randomly caused by “preferential attachment” due to proximity, or that there are more profound, cultural reasons behind the creation of this scene? To be honest, I don't know. I'm not really part of any scene, but I do have musician friend that share the same inspiration from 80s and 90s indie, bands like for instance The Margarets. There's not many Norwegian bands I like. Kings of Convenience are nice, though.

Is it common in this scene to have music as a day job?
No, not now. Norway is a small country, and you don't really make any money on music, unless you're very popular and can do huge tours. My records cost a lot to record, so I need to have a day job, and so do most of the musicians I know.

What I find about the Italian music scene, instead, is that it’s mostly self-centered and not speaking with the outside, most of the time. I think that anyone who follows music could name a few Scandinavian bands, but probably not the opposite. Can you name an Italian contemporary band?
Oh, that's a difficult one. To be honest, I don't really know any. The Italian music that has made its way to Norway, is mostly acts like Eroz Ramazotti.
Discografia

A Place In The Sun