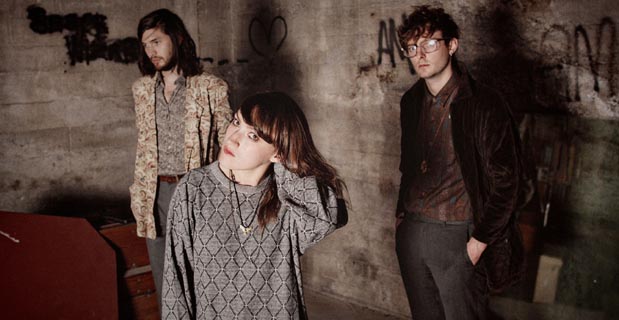 Esben And The Witch

Hi guys and thanks for your time! I would like to start talking about your origins, from what kind of artistic experiences and taste you come from, and how did you meet each other…

We began about four years ago. Daniel and I started by writing on drum machines and guitars, which went quite well.
We experimented with lyrics and with trying to get someone in to sing and that did not go so well. Rachel was an old acquaintance and I just asked her if she wanted to get involved which, thankfully, she did. We don't really have much of a musical background, a few failed piano tests and a couple of skeletons in Daniels closet but we'll leave that door locked. We all have quite similar tastes in music, cinema and literature. Obviously this helps with both the writing of music and the fact that we get along real well as people, pretty vital when you're going to spend days on end holed up together as we have.

Why did you choose adanish fairy tale to represent you and your sound?

Because we liked the way it sounded as a band name at first. The name preceeded Rachels involvement in fact. Daniel and I came across the story, read it, and liked the imagery and subversive quality it had. Really quite a disturbing tale masquerading somehow as a childrens story. It is a strange thing, choosing a name for a band. At the time you don't give it as much thought because you don't choose the name expecting that you'll ever find yourself in a position where enough people care about what you're doing to mean you're asked to explain yourself. If that makes sense? At the time it was Daniel and I operating out of his flat down on the seafront, it seemed difficult to think beyond those four walls at the time.

“Violet Cries”, your debut album, is a magic work in which you melted up post punk, goth influences, in a thing called by you “Nightmare pop”…. What was there behind this Lp and its darkness? What imaginary?

We were, and still are, often drawn towards "darker" subject matter. Having said that I don't think we always see it as bleak and macabre. We see hope and beauty in these things and that too informs the music and the lyrics. The album was inspired by all manor of things, landscapes and the natural world have always played a part. Violet Cries was more of a soundtrack to a snow covered tundra whereas Wash The Sins Not Only The Face is set in a warm, surreal, desert landscape. Musically post-punk has always been a genre we have all enjoyed and I'm sure it has influenced the way we approach playing our instruments. Goth not so much, I really couldn't tell you much at all about Goth music in fact.

I think that more than musical roots, your sound was strongly influenced by literature, painting and cinematography. Is it right? What have been the novels, the movies and the artists that marked your style?

Indeed! Over the years probably too many to name. Personally JG Ballard has been an enduring inspiration, as have the films of David Lynch. I have recently been watching Twin Peaks, for the first time would you belive. I don't know why I haven;t got round to it before. It is truly wonderful. I love how he sits the everyday and the seemingly mundane alongside the supernatural.
When it wants to be it is terrifying because of this juxtaposition, it just works really well. We have been working on a similar thing with our music, trying to include our personalities more so that the songs take on a more rounded feel. We hope this comes across on the new record, songs like "Smashed To Pieces In The Still Of The Night" feeling all the more devastating in its conclusion as it sits alongside moments of hope, beauty and reflection. Seems a bit grandiose written like that but thats the idea anyway.

“is The war that surrounds the words of “Marching Song” in the present or in the past? Is a vision of our world?

I have always imagined it to be a vision of another world, a different time.. I'd imagine that the other two may say something slightly different but we don't always discuss these things. Obviously we have a general concensus about a songs meaning but the specific details are sometimes better left to each of our imaginations, that way the result is more of a natural amalgamation of our three minds. When I think of Marching Song now I think of strength in the face of adversity and resiliance. Two traits we have always thought worthy of celebration in our music.

In “warpath” instead you talk of extinction, of a clandestine paradise… Why do you want to express this kind of urgency, of imminent destruction?

I asked Rachel about this yesterday and she laughed and said she was just really really angry when she wrote those words. I get the feeling she was being a little glib but I think you get the picture. The imminent destruction is that universal feeling where it just feels like everything is ruined and you want to strike out. Speaking as someone who has spent alot of time in her company I'd say that Rachel isn't necessarily one to take much of a period of reflection when she feels wronged. Warpath demonstrates that quite well I think, the lyrics are personnal to her.

In your music there is a strong ritualistic atmosphere, something liturgic that appears in many moments of both your LPs, what is your relationship with religion and spirituality? In your lyrics there is always

We are interested in the way that ideas and stories are delievered in religions and faiths. And whilst we are clearly not attempting to start a religion or anything like it there is a small similarity. We try to create an immersive world that surrounds the songs. We do this in various forms, artwork, videos, titles and the more general imagery that informs and surrounds the music. We all feel that it is important to try to create somthing that people can get lost in and take inspiration from, two things that I feel it would be possible to say we have in common. I wouldn't want to take this too far though, we have a tumblr for goodness sake, its a very different sphere that we operate in! Go and have a look at the tumblr though if you like! Its full of cool stuff that inspires us.

More than in your first album, the esoteric component is present in “Wash Your Sins…” , what has changed in you and your artistic vision in the meanwhile?

Well it was actually our intention to make Wash The Sins Not Only The Face more inclusive. We felt that in the past we may have focused too much on the esoteric and wanted to try and write songs that were more universal, less difficult. Whether or not we succeeded with that is up to everyone else to decide. Violet Cries was intended to be a dense, difficult listen but this time we have tried to imbue the new album with a sense of warmth and space that was not present before. It may not feel that way immediately because the songs vary a great deal in tone this time around, the first album being more uniform, hopefully this will change with time.

About your new album… it’s composed of Ophelic songs like “When That Head Splits”, or “Shimmering”, on the other hand, there are more electro-dark- alternative rock oriented tracks (“Putting Down The Prey” , “The Fall Of Glorieta Mountains”) or a beautiful ethereal point of union of these influences (“Deathwaltz”)… so many faces, so many souls inside it, how would you describe the concept behind each of these songs?

This is exactly the point I was tring to make a moment ago! The songs on the new record are indeed more varied. Wash The Sins Not Only The Face was inspired by long drives in the desert, surreal landscapes and a sense of duality. All of the songs are in some ways related to one or all of these things. The album begins with "Iceland Spar" which is intended to resemble the rallying cry at the start of an expedition, the sun rising in the morning over a foreign expanse. The album is then a journey through this land, strange sights and encounters occuring as a day passes, ending with Smashed To Pieces In the Night which is about when the lights are fading and you meet your doppelganger.

Rachel’s vocal style... there’s something more of Emily Bronte or Emily Dickinson inside it, so a poetic atmosphere..

Rachel read a lot of poetry around the time that she was writing the lyrics for the new record. Shes more into Slyvia Plath and T.S. Eliot than Emily Bronte though.
The poetic element to the lyrics is important, to all three of us. When it comes to vocal delivery Rachel mentioned PJ Harvey and even Michael Stipe as being an inspiration. I remember hearing Daysleeper numerous times over a two week period that Rachel was well into it.

The old - fashioned last question! What are your plans for the future? Any collaboration or split with other artists?

The plan is to begin touring next month. We are all really excited by the prospect of getting back on the road, it has a very good effect on all of our mindsets.
Its been a strange time, waiting for the record to be released becuase obviously it was finished a little while ago and we started to get restless pretty quick. We are trying to get some more reworkings of our tracks done, like the Dave Sitek version of Deathwaltz, as we speak. We are really keen for a band called Teeth Of The Sea to do one. We are great admirers of theirs and although its early days at the moment we are planning a kind of collaberative live experience with them which would be intreguing. Hopefully we will see you at a show at some point this year, come down and experience the live incarnation of Wash The Sins Not Only The Face!


Esben And The Witch on web
Video

Esben And The Witch su OndaRock

Wash The Sins Not Only The Face