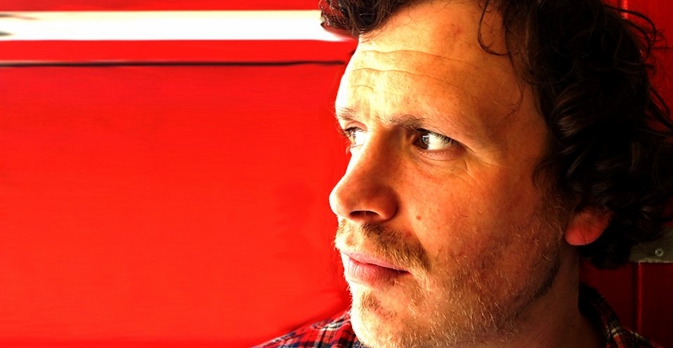 So, hello Seamus, thank you for taking the time to do this. Speaking with other first-hour fans of your music, I think that “we” all felt a bit of surprise, in hearing “The Curious Hand”. Because of the artistic “boldness”, confidence that transpires from the record. “Carlow Town”, for example. It’s just such an accomplished piece of work. Do you acknowledge this as one of the characteristics of the album and, in any case, why is that from your personal point of view?
My pleasure Lorenzo!  I think it does sound accomplished, certainly more so than my first album.  I think a lot of that is down to the fact that this album is much more of a collaboration – a collaboration with my amazing band and also with Leo Abrahams who recorded and mixed much of the album, as well as co-producing.  I also recorded most of it in a proper studio, a contrast to my first album which was more lo-fi…but I think that’s part of its charm.

For at least some people, undeniably, this will be their first encounter with Seamus Fogarty. For sure, few will deny that talent and a clear artistic signature/personality abound. Can you tell us how you grew up, musically?
I grew up playing traditional Irish music.  My instrument was the violin but then I got into Smashing Pumpkins and Rage Against The Machine so I quit that and got an electric guitar.  Then I got a bit obsessed with American lo-fi bands like Pavement before finding some equilibrium with Sparklehorse….and Jim O’Rourke which led me to John Fahey.  And lots of Aphex Twin and The Orb.

I think that you are one of the few that has really managed to blend traditional and contemporary music, like few others have done in recent years. I am thinking about Sufjan Stevens, and Bon Iver, who have tried and succeeded in doing the same, on the other side of the ocean. For both, you can feel that research is one of their main artistic drives, and I guess it is for you. What is the “research” that propelled “The Curious Hand”?
I suppose it is a kind of research, using different software to try and create new sounds or picking up a new instrument and seeing what it might add – I got the loan of a beautiful 10 string cittern from Frank Tate and I remember picking it up while I was working on "Heels Over Head", not knowing anything about how it was tuned, and it just added the exact thing I was looking for.   Also I spent a year working on a film soundtrack, just voice, and I spent a lot of time listening to old acapella folk music as part of that process which I think filtered into the songwriting.

A span of five years has passed between your two records, in which probably the record has changed shape and sound in your mind and, maybe, in its actual form. How did the album come together through these years, in terms of songwriting and sound?
Well there was an EP in 2015 that does a good job of bridging the gap between the two albums.  I did attempt to record a lot of the songs that ended up on this new album in that time also.  But I was never happy with the results….I felt the songs were better than the way I was treating them!  It wasn’t all a waste of time though - when I did finally record those songs, I was able to steal bits and ideas from earlier versions, which was useful!

I guess that, when the creative process gets diluted a bit, it mingles with real life in a sense, and “The Curious Hand” is full with the details of your life in London, the little episodes that have passed by. How would you describe these years in London? Did you find what you were looking for?
The years have been mostly good I think but it’s a big city and people come and go.  I’m lucky to live in a nice house with a garden so that’s a good start. I prefer the idea of London as a base, rather than a place that I have to be all the time.  Have I found what I was looking for? Probably, but there’s always something new to look for.

You were always a multimedia artist, and this record shows it very well with its superb artwork and a very generous series of videos, a bit like in the 90s. It almost seems a bit nostalgic, in a way, to be staging so many videos (and you act in all of them, by the way). What role do they still play for you and how much were you involved in their concept and realization?
I love the videos; it was such a privilege to be able to work with such amazing and creative directors.  I think each video has its own thing to offer and really gives a new life to each song.  In each case, the director had a very strong vision and my own input was fairly minimal….except for my amazing Oscar-winning acting.

Your experimental drive is probably more ingrained in the songs, in “The Curious Hand”, except for a few field recordings of dialogues, for instance in the title track  (and for a couple of short compositions). What moment were you recalling in that recording?
I interviewed two neighbours of mine about 10 years ago, musicians talking about how music had changed over the course of the last 60/70 years.  For me, a big theme of this song is growing up and where you come from.  When I hear my neighbours talking it takes me straight back to Swinford where I’m from…so first and foremost they are in there for myself!  But its always a nice bonus when people ask about those recordings.

This is your first release by a big label, Domino. What was it like working with them, for you?
Its been great, I’ve been listening to various artists from Domino since the 1990’s so its kind of surreal to be on their roster….but in the best possible way.

Thanks again for your time, Seamus. Can you tell us your future plans for a tour, especially if you are coming to the Continent and to Italy?
We’ve a UK & Ireland tour coming up in November and then we’re going to Eurosonic in Holland in January.  After that I’m not sure, hoping to tour the continent properly in February/March….I want to bring the band with me, to really do the album justice live, so it makes everything a bit trickier to organize…promoters, get in touch!!!! Cheers!