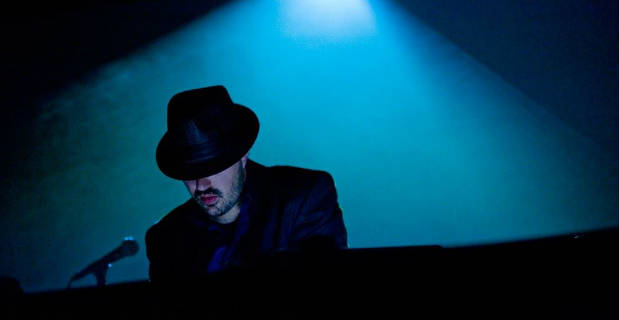 interview by Matteo Meda
Tweet
First of all, I'm curious about your moniker: where does it come from?
It's a misspelling of my original name Martin Juhls. One day i received a promo package with CDs on which someone misspelled my name in such a nice way, that I used it as an artist name.

Your “new” album is not so new: it collects a performance from 2009 at GRM. Why did you decide to publish it just now?
Actually it contains material that I worked on when I was at the GRM studios in Paris for a 2 week residence. The material is super complex. I had a pretty modern MacBook pro at that time and it was running on 90 percent CPU usage already for single tracks. I had to wait over one year until I bought me a new machine, which was able to render those tracks nicely. I also don't know how other artists do it, but I usually have a delay of 2-4 years between the creation and the release of an album.

How have you built up that set? Was it completely improvised?
Since years I'm working only on software and sample basis. Also 80 percent of my music is generative instead of being arranged. For my sounddesign I use a lot of the tools which were developed at the GRM studios. When I create music it is an intuitive process. I don't think so much about it. I listen and do, listen and do, listen and do… until I have the feeling it is finished.

I guess you had a great time there, as GRM is a sort of parallel planet where most of the contemporary electronic (and non) sounds took their first shape. How did you feel about this?
It's great and highly influential. A historical place. Also it was the first time that I could work in a fully equipped quadrophonic studio room, which was very exciting experience for me. I tried out a lot of things there using Ableton Live for quadrophonic soundscapes.

And have GRM composers inspired you in developing your sound? Is there any particular element in your music that put its roots into GRM's experience(s)?
When I started to compose electronic- or electro-acoustic-music I listened to a recorded speech by Pierre Henry were he described the first musical impressions he had in his childhood. He didn't speak about instruments. He spoke about the train passing near by. Then he said "everything I hear is possible musical material". This understanding of sound as music was so close to my own experience that it might be one of the main reasons why I started with electronic music and sampling. I also worked a lot with field recordings and media-manipulations in my early days.

What other musicians, composers or sound sources do you feel as having a great influence on your soundscapes?
Stockhausen, Ligeti, John Cage, Luigi Nono, Aphex Twin, Steve Reich, Brian Eno, Morton Feldman, Harold Budd, Christian Zanesi.
When I started with electronic music I also read a lot of books about the "Studio For Elektronische Musik" in Cologne as well as the GRM in Paris and other places like this. So it was not so much the music itself that inspired me, but the artistic and technological ideas which were described.

This year you've come out also with “Beautyfear”, probably one of the most “organic” album you've ever produced. I know that compositions were mainly written in past years, around 2011 more or less. Somebody claimed them just as “Nostalgia's b-sides”, even if I found the album quite different from that other record. What's your point of view on it? Did you actually worked on that tracks by the time you were recording "Nostalgia"?
There is no connection between "Beautyfear" and "Nostalgia". I usually work very intuitive and fast when creating music. "Nostalgia" somehow was a follow up to "Herbstlaub". I bring up a lot of the ideas I worked on with Herbstlaub to a point with "Nostalgia". The tracks for "Beautyfear" all appeared during 2 weeks working in a theatre in Lisbon. Those sketches where meant to be the score for a theatre piece but have been rejected later. I can not speak so much about this tracks. They are very special and simply happened without thinking pretty much. But the cloudiness and transparancy of the tracks is completely different to the approach on "Nostalgia" I think.

Can you explain a bit better the concept behind it? And that “fear of beauty” the cover really seems to transmit, what is the interpretation you tried to donate it by the soundscapes?
No comment. If I would have liked to explain this with words, I might have written a book. I made music instead.

Going back again we can find another great record, “The Endless Change Of Colour”, in my opinion one of your best and strongest effort. What can you say about it?
Thanks, that's nice to hear. "The Endless Change Of Colour" is a piece of generative music. Different loops are phasing against each other on different layers of sound manipulation. There is no moment on this album that repeats, even if it feels so. I like this idea of creating something that starts its own living. I already have a follow up album to this in the pipeline and I'm thinking about extra long releases of about 24 hours.

The reference to “colours” of the tile, what does it mean? Is it linked in some ways with the idea of graduated-endless shading that the music itself seems to be built on?
Yes, it's a reference to what happens in the music. The music itself is like a prism or could be compared to the turning of a Kaleidoscope.

And last but not least, you achieved another super-interesting effort of the last years with your trio project. Actually I've been thinking since “Nostalgia” about how your music would have suited with a “coral” sound shape... And, again in my opinion, the result was wonderful. What has this experience represented for you?
The trio work was a great and wonderful experience. On stage it felt like a natural extension of my personal expression. Due to several circumstances this project will not go on. Instead of this we formed a new group with Jan-Philipp Alam on piano and Roger Doering (Dictaphone) on saxophone and clarinet. This is also because I'm somehow tired of all this neo-classical musique and want to start something new. When we started the trio we have been the only act in that genre that performed with live instruments. Now everyone is doing it and it becomes more and more cinematic music. In the new group I will focus more on electronic then on orchestral soundscapes and I will play a lot of percussions.

From 2010, you've also been running your own label, Oktaf. In the beginning it was only intended as a medium to publish your albums, wasn't it? But then we had Lufth and Gaston Arévalo's albums... How do you see it today?
When you start a label it is natural that you also want to support other artists that you like. I knew Gastons work already from Thinner and I really liked his ambient tracks. With Lufth it was a completely other story. Joerg is a very good friend of mine and after listening to his unreleased tracks over and over I simply thought that I had to release this album to make this brilliant artist heard.

Even if you've been establishing Oktaf, you produced “The Endless Change Of Colour” for Taylor Deupree's 12k, one of the bests (maybe THE best) ambient/electronic label nowadays. How and when has your experience with 12k started? And are you going to follow producing albums for it?
When I met Taylor in Paris in 2009 he asked me if I would produce an album for him. And "The Endless Change Of Colour" is what came out. I also made a follow up called "Shadows in time", but I haven't really received a feedback yet. This means I might release it on Oktaf myself.

The most interesting aspect of your career is the incredible amount of perspectives from which you've been interpretating ambient music. I'm thinking in particular to your other (and less-known) project, Krill.Minima. How was it born and what does it represent for you?
The idea of Marsen Jules has always been to create a whole universe of sound out of very minimal basic material. The idea for krill.minima was to take the whole universe of musical possibilities and create something out of that. Unfortunately I was not able to bring this project on a level where it really worked. I have a super stunning quadrophonic live set, which I worked on for weeks. I've been to a couple of quadrophonic shows already and I can say that mine is very dense and full of surround details. But actually nobody ever booked it officially. That's why I finally decided to stop the project and focus more on the Marsen Jules.

Is the Martin Juhls who wears Marsen Jules' clothes the same man of the one who wears Krill.Minima's clothes?
Today it is.

What are your other active and producing studio projects? I knew about Falter and a bit old ones called Wildach Sonnerkraut and Massiv…
Wow, you are well informed. Actually this is all something from the past. But there is one alter ego that you didn't mention and which will have its revival next year.

What do you think about live performances? How do you usually translate your music into live sets?
I totally love playing live and interact with the sounds, space and audience directly. I always make sure I have as much control over everything as possible. I don't like to use the term improvisation because that would be false. But for me it is really important to perform my music. Which means I have a lot of possibilities of how I do perform it. I like to play a lot with dynamics and to pick up the listeners and bring them somewhere.

In your opinion, what is the venue in which your music suits better? What kind of places do you like more to play in?
I love playing in theaters, cinemas or concert venues with sitting audience. And I love a good sound. Especially on the monitor. If the monitor sound is good, the show will have a lot of small details.

What projects are you currently working on?
I'm just finishing the cover for my new album "The Empire Of Silence". Also I'm working on other releases for 2015/2016. Then I have a lot of recordings I did with piano player Bruno Sanfilippo, which I have to finish in the next months.
Discografia

The Empire Of Silence

The Endless Change of Colour