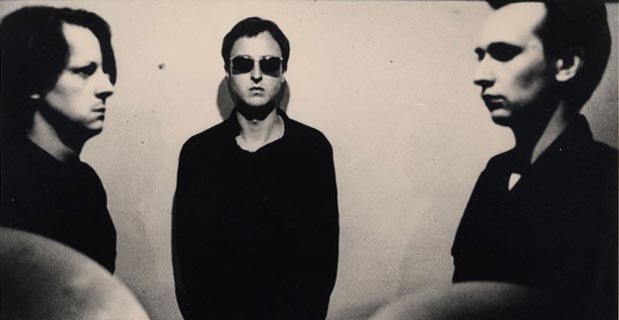 Looking at the dada avant-garde experiments of early '900, the british duo of Cabaret Voltaire realized an alchemy of electronic music, funk, psychedelia and exotic atmospheres which would influence the forthcoming industrial, synth-pop and techno generations
The Cabaret Voltaire, founded in Zurich in 1916 by the theatre works director Hugo Ball with a group of German artists, was the cradle of dadaism, breaking-out and innovative movement of traditional artistic logics. At the Cabaret took place exibitions of Russian and French art, ballets, poetry readings, performances of afro music. Provocative and disconcerting activities that often turned to authentic cultural "events".
Almost sixty years later, in Sheffield (England), three university students, very interested in punk, funk and electronics, dream of emulating on staff the Zurich dada pioneers' experiments. They are Stephen Mallinder (bass/voice), Richard H. Kirk (guitar) and Christ Watson (tape manipulation). In 1973 the three guys form Cabaret Voltaire, a band that would leave a deep print on the whole evolution of forthcoming industrial music.
The aim of our protagonists is to musically describe the urban landscape of Sheffield 30 years after the War, still transfigured by bombs and urban neglect. We can say Cabaret Voltaire: Sheffield = Joy Division: Manchester.

"Our project" - tells Richard H. Kirk - "was born from boredom, from the lack of a future and from the need to create problems". In their first performances, the trio comes with synths, rhythm generators, wind instruments, sounds registered and manipulated with tape-recorders. At the cross between avant-garde futurism and pop, these shows give to Cabaret Voltaire a significant room inside the developing industrial scene of Throbbing Gristle and Clock Dva. Their first demos mix electronic music, funk, punk, psychedelic and world music, highlighting the "estranging" aspects of each one. The experiments with synthesizers (begun with Kraftwerk, Schulze and Neu!) combine with the dilated psychedelic music of first Pink Floyd and with exotic sounds, in particular from Asia. Representative in this sense are the single "Nag Nag Nag", the "distorted" cover of "Here She Comes Now" by Velvet Underground and the EP Extended Play.Trailed by the success of the "noise" new wave, leaded by Throbbing Gristle, the band from Sheffield gets a contract with Rough Trade Recordings, which would publish the trilogy composed by Mix-Up (1979), Voice Of America (1980) and Red Mecca (1981).

The passage to 33's in Mix-Up (1978) marks one of the most lightning debuts of the "new wave" season. The album is in fact a melt of electronic and funk music, disturbed by noise sparks, metallic clangs, claustrophobic pulses. All filtered with an experimental, obscure and visionary sensibility. A sound that drags the listener into a chaotic spyral, that attracts and continuously distracts from the centre, in some kind of obsessive game. Atmospheres are dark and colding, thanks to tracks of minimal electronic like "Heaven And Hell", and "Expect Nothing", while the pressing "Kirlian Photograph", true album's pearl, has an obscure proceeding: a simple bass line on which are posed noises and synthesized sounds. The voice, too, is modified and filtered with electronics. The result is an original hybrid of industrial music, dark-punk and atmospheric dance: a trip to the most obscure ravines of mind, between thriller shivers and moments of pure trance. The record joins the independent English charts and seduces the international critics.

In 1979 the Sheffield trio publishes the first live album: Live at the Y.M.C.A., that demonstrates the fascinating impact of the band's performances and includes some tracks that were already out as singles, like "Nag Nag Nag" and the Velvet Underground cover "Here She Comes Now".
The next-coming EP Three Mantras (1980) is the band's first incursion into non-occidental musical structures: arabian vocalizations and indian sounds enter in their music, ideally fusing, under the "mantra" sign, Asia and Europe ("Western Mantra", "Eastern Mantra"). In the same year, the other Ep Voice Of America is instead a noise collage maybe too much ambitious, with confused pièces like "Damage Is Done", "Voice Of America" and "This Is Entertainment". More incisive, however, it's the Ep 3 Crepuscule Tracks (1981), work of transition from the "art-noise" beginnings and the next more "dance" course: stands out the track "Slugging' for Jesus (Part One)" that arises against reactionary Tv sermons with a dance rhythm and a hypnotic synthesizer in the background.

But that's with the album Red Mecca (1981) that the Cabaret Voltaire go back to the more authentic sense of their "mission". The three Sheffield's industrial fighters come out with a violent and scrubbing work, that recalls Chrome's sound massacres while increasing the dance beat. Their music changes to a less hallucinated-avant-garde electronic music, landing on a more accurate and rhythmic sound, expressed in the song-format, although "alienated". On a monotonous and never ending rhythmic background, a continuous stream of events steps forward: guitar clangs, synthetic melodies, and metallic sounds. What comes out it's a sort of electro-industrial for dark discotheques, that reaches his climax in tracks like "Red Mask", "Sly Doubt" and "A Touch Of Evil" (cover of the Henry Mancini's theme for the homonymous film by Orson Welles).

The double Ep 2 x 45 (1982) lands on some more acoustic rock, introducing instruments like saxophone and clarinet, with interesting episodes like the obsessive "Protection", the oriental-like raga "Rashar" and the metallic funk of "Get Out Of My Face". The record represents the departure of Chris Watson from the group. Disagreeing with Kirk and Mallinder on which road to be followed, he decides to dedicate to Hafler Trio project. Johnny YesNo it's the soundtrack for a film by Peter Care, while the live project of Pressure Company sees the band in company of Solidarnosc trade-union, protagonist of the "Polish revolution".

In 1983 the two members left sign a contract with Some Bizarre and collaborate with Dave Bell (ex Soft Cell). Their style changes inevitably, getting far from the electronic industrial of the early period and closer to dance. Crackdown (1983) is the best result of this new course, with fascinating and "dark" musics like the title-track, "24-24" and "Just Fascination", where stands out a catchy pop melody. Once again forerunners, Cabaret Voltaire coin a sort of industrial-funk (that is to say a funk-based music contaminated by electronics, by the first loops and by dance) that will open the doors to that multitude of house and techno bands of the early Nineties. At the same time, although, Crackdown's synthetic polyrhythms glance to the first signs of that techno-pop that in the albums to come will become more and more artificial, and will be left out at the end of the Eighties with the coming of house music.

The later Micro-Phonies highlights even more the rhythmics, that lap pure techno in the singles "Sensoria" and "James Brown". The Covenant, The Sword And The Art Of The Lord (1985), from the name of a neo-nazi American organization, completes the Bizarre trilogy, confirming another regression towards an easy-listening dance-music: "I Want You", "Motion Rotation" and "Kickback" make a lot of fans claiming of "betrayal".

The tendencies towards the catchy electro-disco music come out also in the EP Drain Train of 1986 (in particular with "The Whole Thing" and "Electro Motive") and in the subsequent album, Code, realized in 1987 for Emi label, in collaboration with Bill Laswell and Adrian Sherwood. Full of insipid melodies and lacking of any experimental intent, the record represents the lowest point of the descending course begun with Micro-Phonies. Also the extracted singles, "Don't Argue" and "Here To Go", turned to a flop.

Left behind without much honour this "second fase" of their career, the Cabaret Voltaire meet three year later in Chicago, where, in company with the house music guru Marshall Jefferson, create the project for the new album. It's the beginning of their "third phase": the house one. Groovy Laidback and Nasty is out in 1990 and it mostly recycles right those stereotypes house whose Cabaret Voltaire were precursors. "Searchin'" disco-soul, "Runaway" rap (!), and "Keep On" aged synth-pop don't impress very much. Surprisingly, are the more "classic" "Easy Life" and "Magic" (fully instrumental) that rescue the album, that anyway turns to be one of their best success thanks in particular to the single "Hypnotized".

In 1991 it's time for the Ep Colours, a sort of musical puzzle that testify their music production process, immediately followed by Body And Soul (1991), where the band leaves the traditional instruments to remain with the electronic keyboards alone.

Between 1992 and 1994 a new trilogy is published under Instinct label: a distinctive change to ambient-house, Aphex Twin, Orb and Autechre-like. The first episode, Plasticity (1992), almost fully instrumental, contains important echoes of the electronic minimalism of Kraftwerk ("Inside The Electronic "Revolution"), but also winks to ambient and new age ("Deep Time", "Soul Vine"). The following album International Language (1993) it's again instrumental, but searches for refuge into an easy-listening electronic music ("Everything Is True", "Radical Chic", "Afterglow"). 1994's Conversation ends the trilogy with the long suite Schulze-style "Project 80".From 1994 to now Cabaret Voltaire practically extinguishes: Kirk keeps on with his solo career dedicating also to parallel projects like Sandoz and Electronic Eye, while Mallinder moves to Australia.

The classic period of Cabaret Voltaire will be included into the anthology The Golden Moments (1987). The Living Legends (1990) includes all the singles to that year. Listen Up (1990) collects unedited and rarities from the first period. The Original Sound Of Sheffield '78/'82 (2002) celebrates instead the group's first activities, ended in 1982 with the divorce from Rough Trade.

Are also to be noticed the collaborations with Clock Dva, "Box" and "Antigroup".
"We never had a real commercial success" - tells Richard H. Kirk - "Some of our intuitions had quite a diffusion, indeed, and influenced a lot of people, even in visual arts". We can't disagree. Pioneers of industrial rock, techno forerunners, visionary avant-gardist of pop, Cabaret Voltaire are one of the most influencing bands of british new wave. Their noise intuitions gave birth to all the industrial scene (from Ministry to Nine Inch Nails), while their dance polyrhythm was the springboard for very good synth-pop bands like Depeche Mode and New Order.

Looking at the dada avant-garde experiments of early '900, the british duo of Cabaret Voltaire realized an alchemy of electronic music, funk, psychedelia and exotic atmospheres which would influence the forthcoming industrial, synth-pop and techno generations
Tweet 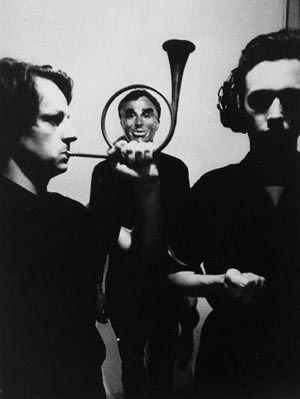