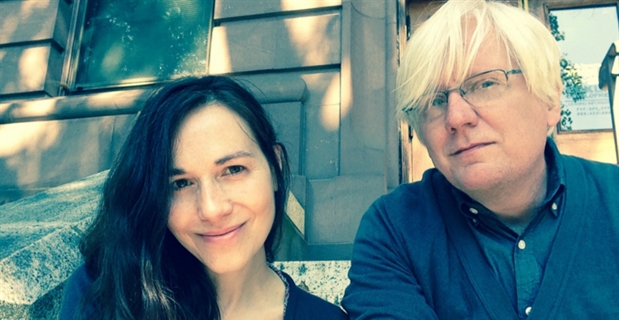 After the years you've spent listening to her voice and her music, it's an exciting moment when you finally get to speak to Karen Peris, to write down that "conversation" she imagines she's having with listeners. Many questions must be made, many others evade you, but before all we speak about the latest The Innocence Mission record - another beacon of hope and love for one's neighbor.

I think that “Hello I Feel The Same” represents a crucial step in a “process of subtraction” concerning the arrangements of your songs. Your music is now made of minute, almost silent movements that express a sense of deep intimacy. Do you agree with this analysis? Is it a proper way to define the sound of The Innocence Mission at this point of your career, or would you like to point out something else about the peculiarities of your new album?
I'm happy you feel that there is a sense of space in the recordings. About the expression of intimacy, it's important to us that the songs be relevant to others who may be listening, and not be confessional. My hope with writing songs is that it could be like joining in a conversation with other people. Maybe, hopefully, having enough space in the music allows some room for a listener's own thoughts.

Would you like to tell us something about the title of the album? It seems to denote a kind of joy related to some aspects of identity that can’t be modified, or maybe that need to remain unaltered.
I think I see what you mean, though for me, the title is talking about what might be universal or connecting. Hello, I feel the same as you do. We are here in the world together. This is partly in response to some letters I've received, but it was meant as, hopefully, an exchange of understanding, about what might be difficult in life, but also what is beautiful.

In our opinion the sequence "Tom On The Boulevard" - "Washington Field Trip" represents one the most intense moments in your whole discography. Could you please tell us something about the birth of these two songs?
"Washington Field Trip" was written over a four year period- I'm not sure why it took this long. For a long time it was only one verse of some images- being in front of the Capitol building, a school trip. Then when I first heard that Pope Francis might be coming to the US, I started to think of the girl in the song as being on a trip to see him in Washington. It made me happy to be able to sing the name Francis in the song. It felt like something I really wanted to record so I kept trying to write it. At some point, cherry blossoms came in - my mom always liked going to Washington to see them every year and I've tried a lot of times to write about them, and about tree flowers sticking to your shoes and being carried on in that way. So, this is maybe a strange combination of images, but the tree flowers became connected with good intentions being carried through and acted on, the longing to be useful.
"Tom on the Boulevard" is for my son and his earliest friend, both now 17 and having to decide about college and the future. This is a subject that occupies a lot of my thoughts in recent years, and there are at least a few songs on this album that come out of big changes in life, and how it might be difficult for any of us to experience change, and also, what are some good things to come out of change, like appreciation of the preciousness of life, especially of the people we have been blessed with.

I think that the most interesting feature of your music is the dialogue between the delicate, sometimes even skeletal arrangements, the sound of Karen’s white voice and the lyrics evoking a series of family snapshots and childhood memories located in a rural, provincial landscape. The vivid recollection of past moments and the sense of astonishment before the wonder of the world induced some critics to mention Emily Dickinson as a possible influence. Is it true? Who are the most important references for your writing?
I do admire Emily Dickinson, but I don't know her as well as I should. Some poets that I read a lot are Pablo Neruda, Kristiina Ehin, Li Young Lee, Elizabeth Bishop, Gerard Manley Hopkins. Though some of Pablo Neruda's poems are difficult I always come back to him. You mention wonder, and this is the feeling I appreciate most in his poems. Reading him always makes me excited about words. Similar to this, listening to Tracy Anne Campbell (Camera Obscura) always makes me feel like singing. Tom Rosenthal, Yann Tiersen, Sufjan,and Jose Gonzales also, are songwriters that are constantly inspiring . And the older album, "Colour Green" by Sybelle Baier was very motivating and freeing to me, discovered by Don, who bought it for me just when I was starting to write things for "Hello I Feel the Same".

Let us speak a bit of your career, we’re very excited to be able to talk to you. So I guess some of the connection we make with your music is the audible chemistry between you two, so we wanted to ask you something more personal, if you don’t mind of course. Can you tell us how you met, or fell in love with each other?
We met in high school, while being involved in the school play, " Godspell". The first time I saw Don was at a Godspell rehearsal, when I turned to see who was playing the guitar so perfectly, in the beginning of the song" Day by Day" - it was him! In a sense we have grown up together. I am so grateful for him, he is the best person I know.

While going through your career, we spotted a kind of blooming of your music, in terms of songwriting and sound, which we had coincide with the release of “Glow”. Do you agree and, if so, what was the main driver of this more solid identity?
I was very young, a teenager to early twenties, when writing the first two albums, and I wish I could have seen and heard more clearly then, that I was maybe trying to sing like someone else, or that my singing sounded affected in some way, and that my songs were not what they should have been. I wish I could have done so much better. For us, the albums beginning with "Birds of My Neighborhood" are the ones we can still feel close to.

Also, while loving your latest production, we have a soft spot for “Birds Of My Neighborhood”. Besides “Now The Day Is Over” (which is, explicitly, a collection of lullabies) and your solo records, it is probably your most intimate output. It is really a magical record, which always manages to move and condition me, with its snowy, breezy soundscapes. Can you tell us about the conception of this album?
I'm very glad about your thoughts for "Birds of My Neighborhood". It was the first album we made completely on our own, (though it was still for a bigger record company, RCA). Some of the songs, like "Lakes of Canada" were written right after coming home from all of the touring we did for "Glow", but it took a number of years to have the whole album finished, and in that time, we moved from our studio downtown ( unheated, very cold) to the attic of our house (also very cold!) to a more permanent studio that my dad helped Don to build. More importantly, or more relevant to the songs, I was writing a lot about our longing to have children, the difficulty and the hope of this. Then, in realizing our first child was finally coming, joy mixed with fear of something going wrong, was a similar cause for writing. So, that was the time period of that album.

The only connection which I found with today’s artists is with Sufjan Stevens, who also covered “Lakes Of Canada”, spoke about it. I can see a more pronounced and profound connection also with his last album, “Carrie & Lowell”. Do you know him personally?
We have worked with Sufjan a couple of times. He came to sing with us at a New York City concert just before Christmas a number of years ago, and we also sang together on our friend Denison Witmer's album, which Don was recording. He was kind to us. We so admire his music, it is always very moving and engaging.

It’s hard to relate your music to anybody else’s but, if I had to, I would point at Mark Kozelek’s, even though your background, your “message” are different, of course – but he expresses a kind of spirituality and he does it in a way that I can’t help relating to yours. I would venture saying he’s kind of your “black soul” brother. Do you agree? What do you think of his most recent outputs, in music especially?
I can still remember hearing Red House Painters for the first time. We loved that roller coaster album and listened to it a lot, also are fans of Mark's newish album, "Admiral Fell Promises", which is beautiful. We have met briefly, mostly through contributing to his John Denver tribute album a few years back. I think I know what you mean about this connection.

As a last topic, I would like to speak about your live activity, which seems very limited and/or localized at the moment. Is it because of purely logistical issues of having a family to run, or also because it doesn’t interest you that much? What are the hopes of a regular European guy who is moved to tears every single time he hears a song of yours to finally see you play live?
We did stop doing concerts when our children were very young, because it felt like an upheaval to our family routine and I didn't want to be away from them. Also I guess I felt I would be less peaceful as a mom if I was anxious about doing concerts. Then, in the past years my voice has become less able to sing for long periods of time, like a concert usually requires. But I'm grateful that it is fine for writing and recording, and I am trying to build back more strength to sing a longer time. I do miss the community of doing concerts, miss being with people. We would love to be able to visit Italy someday, that is a dream of ours. Thanks so much for these thoughtful questions and kind words.

Sun On The Square

Hello I Feel The Same

My Room In The Trees

We Walked In Song