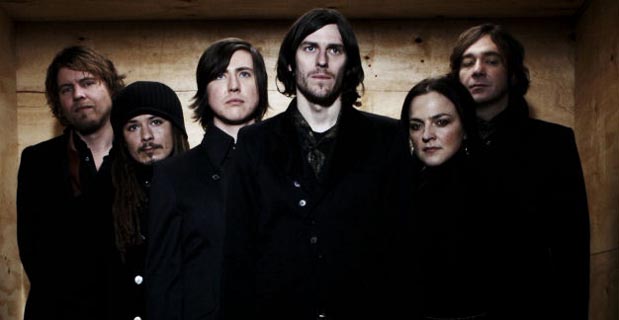 Let's start from your new record, “Axiom”. It's the soundtrack of a short film directed by the Spanish moviemaker collective NYSU. How did you manage to put together your music and the film-making process? And was there a sort of goal, for a band like you, who has always continued to compose “cinematic” music?
“Axiom” is not exactly a soundtrack, the film is actually more of a soundtrack to our music. We composed Axiom in 10 days, a seamless unexpected journey, and felt a movie must be made. We were very lucky to find NYSU. The goal has been reached, NYSU have brought many levels to our music, an immaculate interpretation.

Do you think this project could be a new starting point for your career? Could you start composing soundtrack music in the near future?
Who knows! I think it could work as a parallel to composing our band music.

Will you promote your record on tour? And will you come to Italy?
We are doing a few shows and I'm sure we will come to Italy. We love the Italian audience.

How does the band name Archive come from?
It came from a conversation with Rosko many years ago... we decided it was a good name for a band.

Your 2009 record “Controlling Crowds” seemed to focus on the topic of “control”. Was it a sort a political concept-album?
It was more of a protest album, it was a bad time! It wasn't thought about. I think musicians tend to write how they feel....there were bad relationships in people lives at that time.

Talking about politics, you started in the Nineties, many things changed politically in the UK and in the rest of the world... how do you feel (think) about the actual political and economical crisis?
I think capitalism is so predictable! Grow, grow, grow, grow, collapse. It is very destructive!

Your band had changed many times the line-up. I especially appreciate the entry of Maria Q. She has a beautiful voice and also Italian origins... What did she bring in your musical formula?
She is one of the realest people I ever met. She has brought so much to Archive.

Also in terms of music you changed very much, from your debut since now. How do you deal with this constant evolution and what was your fans reaction, during the years?
I think the fans are used and expect it now. It is not thought about as I said earlier. We write what we feel and that changes your sound.

You've been labeled with post-rock, electronic, trip-hop and progressive-rock: how can you describe your music with your own words?
I think Archive is progressive.

I do appreciate your progressive attitude: I think is very cool and modern, not just a mere revival, because you use electronics and contemporary sounds... What do you think of prog music in the 2000?
I think progressive bands now are just people who get board of structure and boundaries. I think the prog bands in the 70’s became very predictable towards the end.

Last question: I think your music is very rich and complex but it could be also catchy at the same time. Have you ever thought you could achieve a wider commercial success, like bands such as Portishead did?
I think Archive has its own small universe... the beautiful thing about Archive is that it is very much discovered rather than exposed all the time on radio. It’s a word of mouth thing and I'm very comfortable with that.

With Us Until You'Re Dead