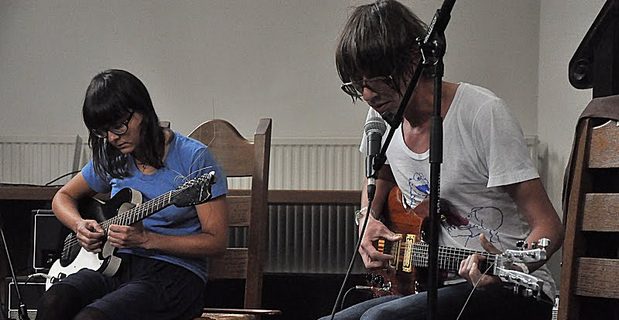 The eternal dance of the Moon and the Sun

On the 30th June the public of Milan had the privilege to attend the first Italian date of the prolific French duo Natural Snow Buildings at the Spazio O'. Prophets of the so-called drone-folk music, Mehdi Ameziane and Solange Gularte talked to me about their artistic career and their plans for the future.


I've been looking forward to see you live for several years... I think this was your first time playing in Italy, am I right? Did you enjoy Milan and the concert at Spazio O'?

Yes, it was our first time in Italy. And yes, we enjoyed a lot playing at the O': the space is just amazing, vast and blank, we played in semi-darkness, a thing we really like to do, and the sound was amazing, we can’t imagine better condition to play. We were amazed that some many people showed up...

We met at the university library on the campus where we were studying in 1997, so our meeting was pretty random. We started NSB maybe one year later .

Was NSB your first musical experience? Where does the band name come from?

We had experiences here and there, nothing consequential. NSB was our very first real band. It was a free word association that took a lot of meanings year after year.

Your music is often referred to as basically drone music, earlier with a combination of psychedelic and folk elements and now, I think, with a larger space influence. These are just rough attempts to include it in some genre, but it's not so easy to define so unique a form of music like yours. Therefore I would like to hear your very own definition for it, what this music means to you as a duo.

Most of the time we don't feel like we’re genre related. It's always embarrassing when someone asks you what kind of music are you playing. How would we describe our music to someone who never listened to it? Well, there's guitar for most part of it, but there are also all kind of instruments, sometimes there's voice and, well, it's partly improvised, there's noise and a drone in the background, it’s melodic... you see what I mean? No? Ok, so we are making a kind of experimental folk music, and it's just to get rid of the question.

Do/did you have any particular influence – bands or composers that made you start your own musical journey?

Yeah, a lot. Listening to music, discovering new stuff is a great part of our life as musicians, so you can imagine the number of musicians that has a great part in constructing our musical ethos. The list would be going on pages and pages (from Kath Bloom and Loren Mazzacane Connors to Tarentel, Neil Young, Six Organs Of Admittance, Charalambides, Alice Coltrane, Stars Of The Lid, film scores, music from all parts of the world), there’s so many of them... We think that whatever you’re listening to, in whatever way you’ll digest it, it will have an impact (positive or negative) on what you’re playing.

Which music do you usually listen to, nowadays?

You've been publishing a large number of Cd-rs and cassettes, especially since the mid Noughties. Most of them were released in numbered editions which disappeared very quickly in the hands of few fans and collectors (some of them only to take advantage of their rarity and re-sell them online at very high prices). Are you aware of your fanbase (quite a large one) and their wish to have a copy of your main albums?

Our fanbase is an abstraction to us, mostly due to the fact that we are making music in what we could call a “social void”. We are reclusive by choice, so fans are not part of the equation when we are creating. And though we are very happy (and touched by their reactions) when we have the occasion to actually meet people who like our music (though it freaks us out a little…), we’re not obsessed with the fans and their desires while we're playing music... It could be a paradox, but it’s pretty clear in our head. And speaking about the rarity, we like the idea that things exhaust themselves: you can’t expect to be here for goods, and it applies to everything. Now, we can’t do anything about the merch around our releases, but flooding the world with unwanted copies would not be a solution. Overproduction is definitely not the best answer to scarcity.

Is there a specific (perhaps ideologic) choice behind these limited editions? Or is it just because there's not enough interest from music labels in publishing them?

Yes, we could say that there's some kind of an ethic of restrain behind the will to not flood the world with our music. We are just shadows in this world, and we’re kind of akin to the idea that at one point in the future we will definitely be back to releasing things in small quantity in our bedroom.

You recently re-released some old (awesome) stuff with Ba Da Bing records. What's your relationship with this label? Is there a chance to see a reissue of "The Dance of the Moon and the Sun" - probably your most appreciated work - in the near future?

The label contacted us maybe two years ago. We were exchanging e-mails with Ben Goldberg from Ba Da Bing maybe for one year before actually releasing something on his label. That was funny, because we were thinking about his label at the time we finished “The Dance Of The Moon And the Sun”, circa 2005 (we were big fans of 1 Mile North), but backed up because we thought Ba Da Bing was too big for us. Ba Da Bing is our label of choice right now. Our next record will be released with them and yeah, we are discussing about a joint reissue of “The Dance Of The Moon And the Sun” with Ba Da Bing and Students of Decay.

Along with your albums there's usually some great artwork by Solange. Did you study drawing or are you self-taught? What's your inspiration for these drawings and, for example, the comic book for “Shadow Kingdom”?

Solange: I'm self-taught. I never took art classes in my life. The main matter for the “Shadow Kingdom” comic book came from the writings of Agnes Murgoci. She was an ethnologue/folklorist who did her fieldwork in central Europe (mainly Romania) in the 1930's and got interested by vampire lore.

Do you know and/or appreciate some other underground project assimilable to yours? For example Big Blood, Super Minerals (a boxset by Peasant Magik in 2010 featured some NSB tracks along with theirs), Cerberus Shoal, Vibracathedral Orchestra, Fursaxa, Jüppala Kääpiö...

Yes, we love Big Blood and Vibracathedral Orchestra, and Fursaxa is definitely a big influence (where is she, by the way?). We may have something by Super Minerals somewhere at home...

Would you be interested in working with some other musicians, cooperating for a new album release (other than a split record)?

We are currently working on tracks with Ben Nash, it should be out in the year.

Recently your production has slowed down a bit, and your latest two albums as NSB were sold almost exclusively at your concerts. What are the plans for the future?

We slowed down releasing but we are still recording music, so... expect some new album soon on Ba Da Bing.

What about your parallel projects as Isengrind (Solange) and TwinSisterMoon (Mehdi)? Do you have new developments or projects in mind?

Mehdi: It's highly possible that the last TSM record to date (“Bogyrealm Vessels”) will be the last one. I'm pretty happy with the whole TSM discography, it makes some kind of sense, some kind of a whole that I wouldn't want to spoil by releasing another album. I have some unreleased material that I will maybe put on tape sometime but I think it's time to banish TSM for good in limbo...
Solange: I’ve just released a new Isengrind tape on Was Ist Das.

Waves of the Random Sea